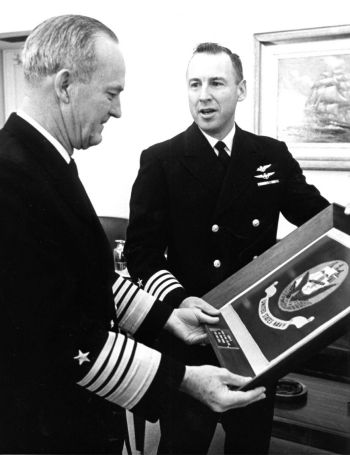 A 1952 graduate of the U.S. Naval Academy and distinguished Naval aviator, James Lovell commanded four NASA spacecraft missions—Gemini VII, Gemini XII, Apollo VIII, and Apollo XIII.  Lovell achieved many “firsts” in manned spaceflight, such as the rendezvous of a two manned maneuverable spacecraft (Gemini VII), first crew to leave earth’s gravitation influence (Apollo VIII), and first astronaut to journey twice to the moon (Apollo VII & XIII).  The experiences of Lovell and his fellow Gemini and Apollo astronauts paved the way for the successful moon landing of Apollo XI.  Lovell held the record for longest amount of time in space with 715 hours and 5 minutes until it was surpassed by the Skylab flights from 1973-1979.  Lovell is perhaps most known for his command of Apollo XIII from 11-17 April 1970.  This moon landing mission was compromised when the service module cryogenic oxygen system failed.  Instead of landing on the moon, Lovell and his crew, John Swigert and Fred Haise, were forced to use their lunar module as a life raft in order to conserve the resources needed for their return to Earth.  President Bill Clinton presented Lovell the Congressional Space Medal of Honor for his command of Apollo XIII mission in 1995. Captain Lovell retired from the Navy and space program in 1973 and became a businessman in the private sector, a writer, and public speaker.