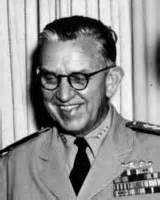 As Chief of Naval Operations, Admiral Louis E. Denfeld emphasized the importance of naval forces to the conduct of nuclear warfare in the new Cold War era. At the cost of his career, he stood firm to assure the U.S. Navy a vital role in the national defense establishment.

Born in Westborough, Massachusetts, Denfeld graduated from the U.S. Naval Academy in 1912. He served in the fleet in the following years and took command of destroyer USS McCall in 1919. Over the next two decades, Denfeld commanded numerous ships and stations. During World War II, Denfeld served in the Bureau of Naval Personnel, helping coordinate the recruitment and training of the millions of Sailors who joined the Navy. Following the war, Denfeld served as Chief of the Bureau of Naval Personnel.  Command of the Pacific Fleet capped his operational service. Promoted to Chief of Naval Operations in December 1947, Denfeld worked to integrate the Navy into the postwar defense establishment. He helped ensure that the Navy would have a role in the development and deployment of nuclear weapons crucial for naval warfare. Denfeld took a strong stand in support of the Navy during Congressional hearings in 1949 over the role of naval aviation in national defense. Because of Denfeld’s principled advocacy of sea power, which was at odds with the position taken by the Secretary of Defense, the Secretary of the Navy requested the admiral’s resignation. Denfeld’s purposeful stand during the so-called “Revolt of the Admirals,” however, helped persuade Congress of the continuing value of aircraft carriers and naval aviation.