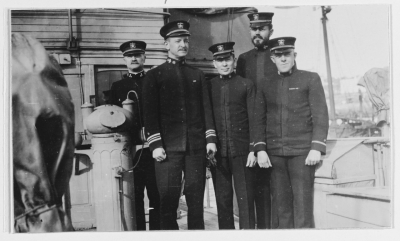 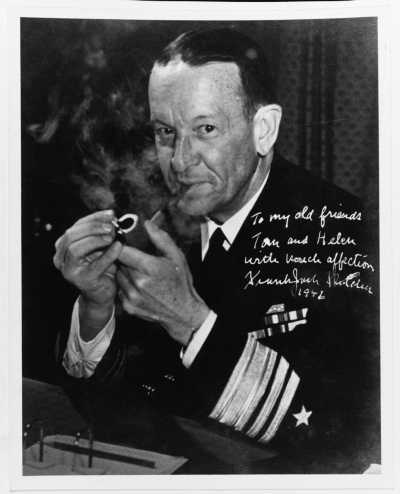 Frank Fletcher commanded U.S. Naval Task Forces during the key WWII battles of Coral Sea (4-8 May 1942), Midway (4-7 June 1942), Guadalcanal (7-9 August 1942), and the Eastern Solomons (24-25 August).  This span of battles marked a tipping point of the Pacific War in which U.S. forces halted the progress of the Japanese Imperial Navy, sinking six Japanese carriers.  Fletcher, U.S. Naval Academy ‘06, began his career with assignments in the Atlantic and Pacific Fleets.  In April 1914, he served aboard USS Florida (Battleship No. 30) during the landings Vera Cruz.  He was awarded the Congressional Medal of Honor for his actions during this operation.  Fletcher commanded the USS Margaret (Scout Patrol No. 571) and USS Benham (Destroyer No. 49) during World War I.  For his command of the latter, he earned a Navy Cross for conducting patrols and escorts in submarine and mine infested waters. Fletcher fitted and commanded several ships through the interwar period, served at the Washington Navy Yard, and completed courses at the Naval and Army War Colleges.  He was assigned to the Office of the Chief of Naval Operations in the summer of 1933 and then had duty as Aide to Secretary of Navy Claude Swanson from November 1933-May 1936. Fletcher was commander of Cruiser Division 6 when the Japanese attacked Pearl Harbor.  Two months after Pearl Harbor he commanded one of the two Task Forces participating in the Marshall-Gilbert Islands campaign.  Fletcher was given leave in late August 1942 after nearly eight months of sustained combat.  He was reassigned to command in the Northern Pacific and remained there for the remainder of the war.  His forces were the first to penetrate the Kurile Islands and they occupied Northern Japan after the surrender.  Fletcher served on the Navy’s General Board after WWII, retiring as that body’s chair in 1947. Admiral Fletcher passed on 25 April 1973 and was buried in Arlington National Cemetery.