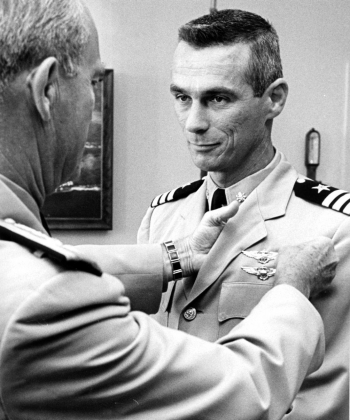 Eugene Cernan is one of the two men in history to have flown to the moon on two different occasions, and is the last man to have left his footprints on the lunar surface. After receiving his commission through the Navy ROTC program at Purdue University, Cernan entered flight training post-graduation. Before attending Naval Postgraduate School, Cernan was assigned to Attack Squadrons 126 and 113 at the Miramar, California, Naval Air Station. Upon his admittance into NASA in 1963, Cernan’s first mission was Gemini IX, in which he occupied the pilot seat alongside fellow astronaut Tom Stafford. Following the success of Gemini IX, Cernan acted as backup pilot for Gemini XII. For his second spaceflight, Cernan served as lunar module pilot of Apollo X, 18-26 May 1969 which was the first comprehensive lunar-orbital qualification and verification flight test of an Apollo lunar module. Cernan was backup spacecraft commander for Apollo XIV. In his third and final flight into space, Cernan commanded Apollo XVII, the last manned mission to the moon for the United States, launched 6 December, 1972. On 1 July 1976, Eugene Cernan retired from the U.S. Navy after 20 years of service and ended his formal association with NASA. Throughout his career, Cernan acquired over 16 unique awards and commendations.  He passed away 16 January 2017 at the age of 82.