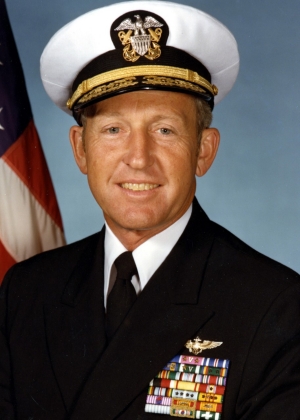 Admiral Thomas B. Hayward strengthened the Navy to meet the challenge of growing Soviet power by building sophisticated submarines, surface ships, and aircraft and promoting a global, offensive-minded maritime strategy.

After serving as an enlisted Sailor during World War II, Thomas B. Hayward attended the U.S. Naval Academy, graduating in 1947. An aviator, he repeatedly served on board aircraft carriers at sea and in training and test pilot commands ashore. Hayward flew 146 combat sorties with Fighter Squadron 51 in the Korean War. Combat command of Carrier Air Wing Ten and aircraft carrier USS America during the Vietnam War rounded out his sea duty. In between his tours of duty, Hayward enhanced his education with attendance at the National War College and the George Washington University. Hayward demonstrated superlative leadership skills as Commander U.S. Seventh Fleet and then as Commander in Chief, U.S. Pacific Fleet. In the latter command, Hayward called for the development of a global naval strategy to face the treat of growing Soviet military power that would drive the Navy’s mission in the mid-1980s.  To counter the Soviet presence, the admiral increasingly deployed fleet units into the Indian Ocean. He also fostered the design and production of advanced warships, aircraft, and missile systems. As Chief of Naval Operations, Admiral Hayward built on the work of his predecessor to prepare the Navy for the challenges of the late Cold War.