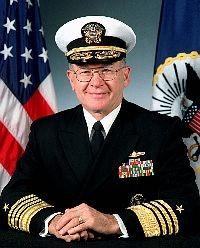 Admiral Vernon Clark ably led the Navy during the opening stages of the Global War on Terrorism and developed innovative naval strategies for employing the fleet.

Born in Sioux City, Iowa, Clark attended Officer Candidate School and was commissioned in August 1968. Clark served on board surface ships and commanded USS Grand Rapids, USS McCloy, USS Spruance, and directed several surface commands. He was also Commander Second Fleet and Commander U.S. Atlantic Fleet. In joint billets, he served as Director of Operations (J-3) and then Director of the Joint Staff. As Chief of Naval Operations, Admiral Clark led the Navy through the initial phases of the Global War on Terrorism, launched in response to the 11 September 2001 terrorist attacks on the United States. The Navy that he helped equip, train, and deploy overseas was key to the defeat of Taliban and Al Qaeda forces in Afghanistan and Saddam Hussein’s army in Iraq. One of Clark’s signature measures was Sea Power 21, a strategic approach that focused on employing the fleet in the littoral reaches of the world and projecting sea power ashore. His Fleet Response Plan changed the Navy’s dynamic from permanently stationing much of the fleet in distant waters to surging the fleet from the United States in times of major crisis. His other innovations included the expeditionary strike group for fast action overseas and personnel policies that improved the quality of life for Sailors and their families. When he retired, Clark became the second longest serving CNO in history.