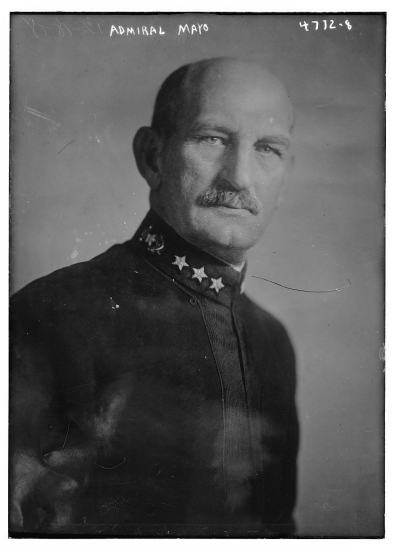 Henry Thomas Mayo graduated from the Naval Academy in 1876 and commanded all American warships in Atlantic and European waters during World War I.  For nine years between 1879-1895, Mayo surveyed the Pugent Sound on Coast Survey vessels Earnest and Eagre.  He had a uneventful assignment during the Spanish-American War as navigator, then executive officer, of USS Bennington (PG-4) surveying Pearl Harbor. Mayo commanded USS Albany (Cruiser) from 1905-1907, California (Armored Cruiser No. 6) 1909-1910, and Mare Island Navy Yard 1911-1913.  In April 1913, he was promoted to rear admiral and took command of Fourth Division, Atlantic Fleet aboard Connecticut (Battleship No. 18).  As commander of U.S. vessels at Tampico, Mexico, Mayo demanded, and received, an apology from the Mexican government and a 21 gun salute to the U.S. Flag following the unwarranted arrest of a U.S. officer and his crew at a wharf in Tampico 9 April 1914. The incidenct came during a period of severe diplomatic strain between the United States and Mexico and contributed to the U.S. Occupation of Vera Cruz. On 6 June 1915, Mayo was promoted to vice admiral and second in command of the Atlantic Fleet, he took command of the Atlantic fleet 19 June the following year.  Throughout World War I, Admiral Mayo commanded all U.S. vessels in Atlantic and European waters.  He received the Distinguished Service Medal for his leadership during the war.  In lieu of retiring at the statutory age of 64, Mayo served as senior member of the Navy General Board until 28 February 1921 when he retired upon his own request.  In retirement, Mayo served as Governor of the Philadelphia Naval Home for four years.  Mayo died in New Hampshire 23 February 1937.