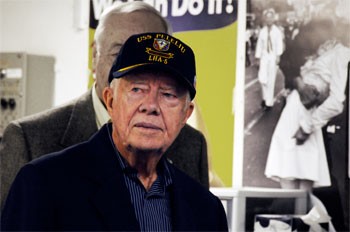 James Earl (Jimmy) Carter, Jr., who in 1976 became the fifth consecutive President with prior Navy service, was born in Plains, Georgia on 1 October 1924, to Lillian Gordy and James Earl Carter. Carter grew up in a rural atmosphere and attended public schools. Graduating from Plains High School in 1941, he attended Georgia Southwestern College in Americus, Georgia. After a year there, Carter transferred to Georgia Institute of Technology to study mathematics for a year in order to qualify for the US Naval Academy. In 1943, Carter received an appointment to the academy and became a member of the Class of 1947. After completing the accelerated wartime program, he graduated on 5 June 1946 with distinction and obtained his commission as ensign.

After he graduated, Carter was stationed at Norfolk and assigned to USS Wyoming (E-AG 17), an older battleship that had been converted into a floating laboratory for testing new electronics and gunnery equipment. On Wyoming, Carter served as radar officer and CIC officer. Detached when Wyoming was decommissioned on 23 July 1947, he was assigned that day to another similarly used battleship, USS Mississippi (E-AG 128) as Training and Education Officer. After completing two years of surface ship duty, Carter chose to apply for submarine duty. Accepted, he began the six-month course at the U.S. Navy Submarine School, Submarine Base, New London, Connecticut from 14 June to 17 December 1948.

Upon completion of the course, Carter was assigned to USS Pomfret (SS 391) based at Pearl Harbor, Hawaii where he reported on board on 29 December. Pomfret left on a simulated war patrol to the western Pacific and the Chinese coast on 4 January 1949. On board, Carter qualified in a submarine on 4 February, and served as Communications Officer, Sonar Officer, Electronics Officer, Gunnery Officer and Supply Officer. On 9 March, he served as the approach officer for a simulated torpedo firing at target ships, and scored a "hit." The submarine returned to Pearl Harbor on 25 March. Soon after Carter's promotion to Lieutenant Junior Grade on 5 June 1949, Pomfret was sent in July to San Diego where the submarine operated along the California coast.

Detached from Pomfret on 1 February 1951, Carter was assigned as Engineering Officer for the precommissioning detail for USS K-1 (SSK 1). K-1, the first postwar submarine built, was under construction by Electric Boat Division, General Dynamics Corporation, Groton, Connecticut. After K-1's commissioning on 10 November 1951, Carter served as Executive Officer, Engineering Officer, and Electronics Repair Officer. During this tour he also qualified for command of a submarine.

When Admiral Hyman G. Rickover (then a captain) started his program to create nuclear powered submarines, Carter wanted to join the program and was interviewed by Rickover. On 1 June 1952, Carter was promoted to Lieutenant. Selected by Rickover, Carter was detached on 16 October 1952 from K-1 for duty with the U. S. Atomic Energy Commission, Division of Reactor Development in Schenectady, New York. From 3 November 1952 to 1 March 1953, he served on temporary duty with the Naval Reactors Branch, U. S. Atomic Energy Commission, Washington, DC to assist "in the design and development of nuclear propulsion plants for naval vessels."

From 1 March to 8 October, Carter was preparing to become the engineering officer for the nuclear power plant to be placed in USS Seawolf (SSN 575), one of the first submarines to operate on atomic power. He assisted in setting up training for the enlisted men who would serve on Seawolf. During this time his father became very sick and died in July 1953. After his father's death in 1953, Carter resigned from the Navy to return to Georgia to manage the family interests. Carter was honorably discharged on 9 October 1953 at Headquarters, Third Naval District in New York City. On 7 December 1961, he transferred to the retired reserve with the rank of Lieutenant at his own request.