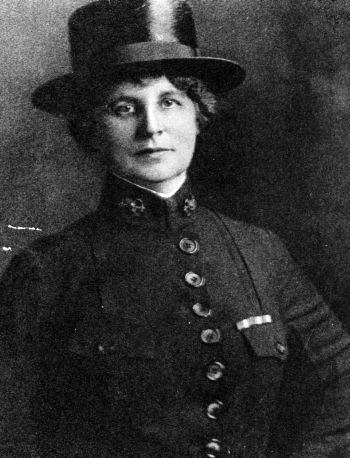 Portrait photograph, taken in uniform during the World War I era. She was the second Superintendent of the Navy Nurse Corps, from 20 January 1911 to 30 November 1922. Official U.S. Navy Photograph, now in the collections of the National Archives.

Lenah Sutcliffe Higbee was born in Chatham, New Brunswick, Canada, on May 18, 1874.  She was graduated in nursing from the New York Post Graduate Hospital, in 1899, and shortly after, married Lieutenant Colonel J. H. Higbee, U. S. Marine Corps.  After Colonel Higbee’s death in April 1908, she resumed her nursing career and took a post graduate course at Fordham Hospital, New York.  Upon completion of this course, she was appointed Nurse in the Navy Nurse Corps, and reported for duty at the U. S. Naval Hospital, Washington, D. C.  In April 1909 she was promoted to Chief Nurse, U. S. Navy, and was transferred to the Naval Hospital, Norfolk, Virginia.

On January 20, 1911, Mrs. Higbee was appointed Superintendent of the Navy Nurse Corps and returned to duty in Washington in the Bureau of Medicine and Surgery.  She held this position, the second so named, until she was honorably discharged from the Naval Service, at her own request, on November 30, 1922.

“For distinguished service in the line of her profession and unusual and conspicuous devotion to duty as Superintendent of the Navy Nurse Corps.”

Mrs. Higbee died on January 10, 1941 at Winter Park, Florida, and is buried in Arlington National Cemetery beside her husband.

A destroyer, the USS Higbee (DD-806), was named in her honor.  Her sister, Mrs. A. M. Wheaton, Wolfville, Nova Scotia, Canada, christened the vessel, launched at the Bath Iron Works Corporation, Bath, Maine, on November 13, 1944.  The USS Higbee served gallantly in the Pacific during the latter period of World War II.