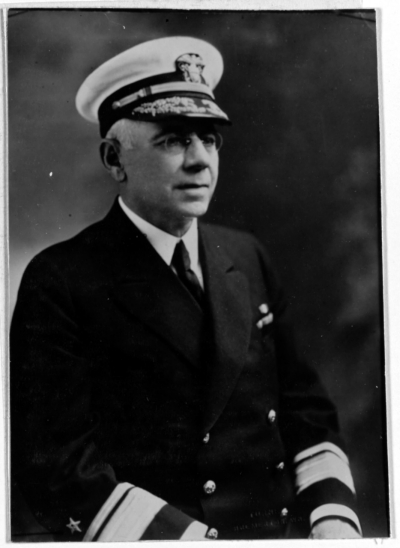 John Adrian Hoogewerff graduated from the Naval Academy in 1881 and advanced to the rank of Rear Admiral by World War I, commanding Division One, Battleship Force One, Atlantic Fleet and then Division Four, Battleships, Atlantic Fleet.  Hoogewerff’s first duty post-Academy was on flagship of the European Squadron, USS Lancaster (Screw Sloop-of-War) beginning in June 1881.  Lancaster was present at the July 1882 British bombardment of Alexandria, Egypt and Hoogewerff was part of an American landing party sent into the city to guard American assets in the city, extinguish fires, bury the dead, and preserve order.  During the Spanish-American War, Hoogewerff served on the USS Cincinnati, which blockaded Cuban ports and participated in fighting at Matanzas, Cuba.  In 1908 Hoogewerff took command of USS Chicago on the Midshipmen’s Practice Cruise, his first command.  Hoogewerff was given command of USS Pennsylvania, flagship of Commander-in-Chief, U.S. Atlantic Fleet in March 1917.  He assumed command of Division One, Battleship Force Atlantic Fleet in August of that year with USS Alabama as his flagship.  He was awarded the Navy Cross for his command of this Division during World War I.  Following WWI, Rear Admiral Hoogewerff was Superintendent of the Naval Observatory in D.C. and successively served as President of the Naval Examining Board and as Commandant of Navy Yard Puget Sound.  He retired from active service with 47 years of service in November 1924.  Hoogewerff died 13 February 1933 while visiting his son Hiester, a naval officer stationed at Pearl Harbor.  Hoogewerff was buried at Arlington National Cemetery.