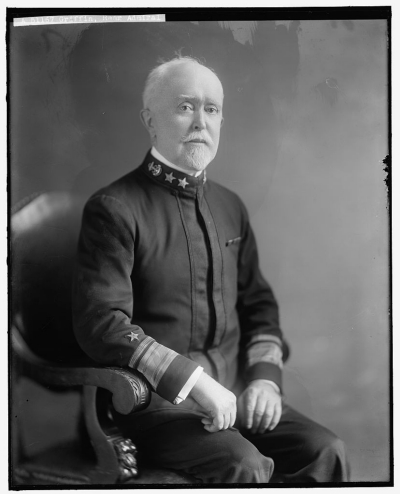 Rear Admiral Robert Griffin, a mechanical engineer and Chief of the Bureau of Steam Engineering through WWI, propelled the U.S. Navy from coal to oil fired engines.   He also oversaw the adoption of the electric drive as the propulsion for U.S. Navy capital ships.  Upon graduation from the Naval Academy in 1878, he served at sea on USS Quinnebaug (Screw Corvette), USS Tennessee (Armored Cruiser No. 10), USS Philadelphia (Cruiser No. 4), and USS Vicksburg (Gunboat No. 11).  He also had duty assignments at the Bureau of Steam Engineering in Washington, DC.  He served on USS Mayflower II (Seagoing Gunship No. 1), fitted as a gunboat, in the blockade of Cuba during the Spanish-American War.  After several more stints of duty afloat, he served as Fleet Engineer of the North Atlantic Fleet onboard USS Kearsarge (Battleship No. 5) in 1905.  He became Chief of the Bureau of Steam Engineering and remained in this office until retirement.  Griffin proved a strong advocate for modernizing the Navy from coal to oil and for preserving the Naval Oil Reserves necessary to supply the new fleet.  He received recognition for his service in designing, building, and maintaining ship machinery in addition to converting captured German vessels.  In Clark’s lifetime he distinguished himself as an authority on marine engines.  He passed in the Washington, DC Naval Hospital on 21 February 1933 following an illness and was interred in Arlington National Cemetery.