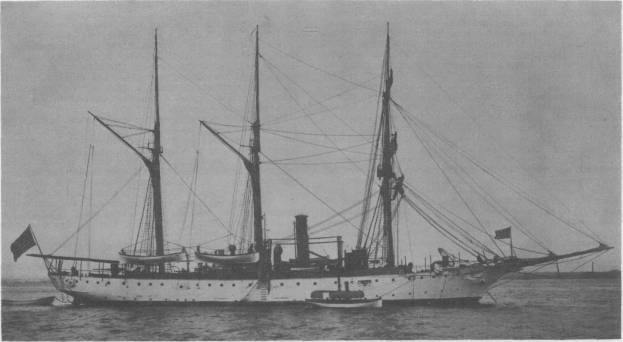 Caption: An early-1900s view of the gunboat Vicksburg in white hull and buff upperworks, the standard finish for steel ships at that time.

A city in Mississippi located on a bluff at the mouth of the Yazoo River; founded in 1812; and named for Newitt Vick (1766-1819), the owner of a plantation on the present site of the city. During the American Civil War (1861-1865), Union Gen. Ulysses S. Grant besieged the city from 19 May to 4 July 1863. The Confederate garrison surrendered, giving the North control of the Mississippi River and its tributaries, and contributing greatly to the eventual overall Union victory.

The fourth ship named Vicksburg. The first Vicksburg, a wooden steamer converted to a screw gunboat, served from 1863-1865. Light cruiser Cheyenne (CL-86) was laid down on 26 October 1942, but, exactly one month later, was renamed Vicksburg, and served from 1944-1962. The name Vicksburg was also assigned to a light cruiser (CL-81) on 28 December 1940, but she was renamed Houston on 12 October 1942, in honor of heavy cruiser Houston (CA-30), sunk by the Japanese in the Battle of Sunda Strait, Netherlands East Indies (Indonesia), on 1 March 1942.

Vicksburg stood out of Newport, R.I., on 16 January 1898 and, after two months in the Caribbean, returned north as far as Norfolk, Va., late in March. On 26 April, the day after the United States Congress declared that a state of war with Spain had existed since the 21st, Vicksburg stood out of Chesapeake Bay and headed south to join Rear Adm. William T. Sampson's North Atlantic Fleet in blockading the northern coast of Cuba. She reached Key West, Fla., on May Day and, after three days there, got underway to join the blockade.

For the next three months, Vicksburg patrolled the Cuban coast near Havana, returning to Key West periodically for fuel and provisions. During her tour of duty in Cuban waters, she captured three blockade runners. She took Oriente and Fernandito on 5 and 7 May, respectively. Both were small unarmed sailing ships bound from the Gulf of Campeche to Havana with cargoes of fish. The gunboat took each to Key West where they were condemned by a prize court. Her third and final capture came more than a month later on 24 June when she encountered Ampala, a 150-ton sailing vessel, bound from Havana to Truxillo. Though Ampala carried no cargo save provisions for her passengers, Vicksburg took her to Key West where she, too, was duly condemned. On one occasion, Vicksburg came under the fire of a shore battery near Havana. The fighting in Cuba ended by August, and the need for blockaders diminished. Vicksburg departed Cuban waters on 14 August and, after a three-day stop at Key West, continued north to Newport where she arrived on 23 August. During the remaining months of 1898 and the first five months of 1899, she operated along the east coast and in the Caribbean. On 24 May 1899, Vicksburg was placed out of commission at Boston, Mass.

Almost a year later, on 15 May 1900, the gunboat was recommissioned at Newport, R.I., Comdr. E. B. Barry in command. After six months of operations in the Atlantic, Vicksburg stood out of Boston on 9 November for duty on the Asiatic Station. She sailed via the Mediterranean Sea and the Suez Canal and arrived at Cavite, on the island of Luzon in the Philippines, on 2 February 1901. During the first of her three years in the Far East, Vicksburg joined other ships in supporting the Army's battles against Filipino insurrectos. Vicksburg herself contributed significantly to the success of those operations when she assisted U.S. soldiers in capturing the leader of the revolt, Emilio Aguinaldo, at Palawan Island in March 1901. She also cooperated with the Army again in June during the occupation of Puerta Princessa and Cuyo, the two major cities on the island.

In 1902, the warship moved north and, for the remaining two years of her tour, cruised the waters off the coasts of China, Japan, and Korea. She spent the entire first quarter of 1904 at Chemulpo (near Incheon), Korea, protecting American interests during the initial stages of the Russo-Japanese War. On 9 June 1904, Vicksburg took leave of Asia when she stood out of Yokohama, Japan, and shaped a course for home. She reached Bremerton, Wash., on 29 June but later moved south to the Mare Island Navy Yard near San Francisco, Calif. There, she was placed out of commission, in reserve, on 15 July 1904.

After almost five years of inactivity, Vicksburg was placed back in commission at Mare Island on 17 May 1909, Comdr. Alexander S. Halstead in command. The gunboat steamed from San Francisco on 16 June and headed south to the coast of Mexico and the Isthmus of Panama. During the next four years, she cruised the western coast of Central America in an effort to support American diplomatic moves to maintain peace in the revolution-prone nations in the area. For that purpose, she made calls at ports in Mexico, Honduras, El Salvador, Guatemala, and Panama. Conditions in Nicaragua were especially volatile during those years, and Vicksburg returned to Corinto and other Nicaraguan ports time and time again. 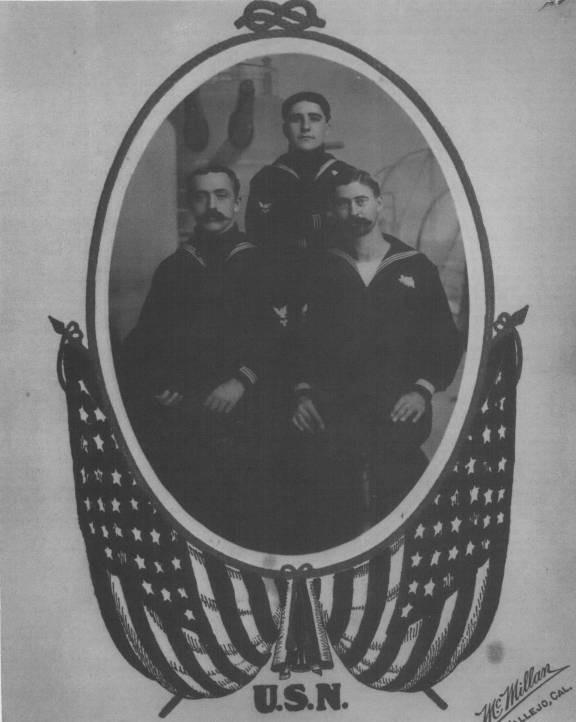 During the early summer of 1912, she began operating primarily along the California coast. In late August, she cruised south for an extended courtesy visit to Guayamas, Mexico. The gunboat returned to the United States at San Diego on 3 November. Following repairs at the Mare Island and the Puget Sound navy yards, she began duty with the Washington Naval Militia on 18 June. That service occupied her almost completely until the United States entered World War I in the spring of 1917. The only exception came in May and June of 1914 when she was placed back in full commission for a brief cruise to Mexico. Upon her return to Puget Sound, she reverted to reserve status and resumed training duty with the Washington Naval Militia.

On 6 April 1917, the United States entered World War I. A week later, on 13 April, Vicksburg was placed back in full commission at Puget Sound. The gunboat patrolled the western coasts of the United States and Mexico through the end of the war, helping to curb German influence. Incidents involving German nationals occurred frequently.

One such incident provided Vicksburg with the single concrete reward for her vigilance. On 17 March 1918, she anchored off the harbor at Viejo Bay, Mexico, in response to information that a ship carrying Germans would attempt to leave the port. At 1225, she sighted schooner Alexander Agassiz standing out to sea under the American flag and immediately got underway to intercept her. The schooner tried to make a dash for it, but a shot across her bow compelled Alexander Agassiz to heave to and submit to a search.

Vicksburg's boarding party made some interesting discoveries. The schooner carried 14 people, including five Germans and six Mexicans. Two others were women, one of them purportedly the vessel's owner. The remaining passenger was an American, probably the informant upon whose advice the capture was made since he is listed in Vicksburg's war diary as ". . . one American spy. . . ." The motorized sailing vessel also carried some small arms and a quantity of ammunition as well as a "German flag." The people were taken on board Vicksburg, and the five Germans put in irons.

Vicksburg justified the capture because the schooner carried enemy nationals and that she possessed no proper ship's papers. In a three-hour discussion held that afternoon with the Captain of the Port, the British vice consul, and commanding officers of other American ships in the area, Vicksburg's commanding officer supported his action further with the fact that the passengers were seen to throw articles overboard just before the boarding party arrived and with the suggestion that Alexander Agassiz had been fitted out as a raider. That shaky proposition was later repudiated by an American prize court which ordered that restitution be made to the owner of the schooner. It now seems likely that the five Germans simply attempted to return home.

Later that month, Vicksburg delivered her prize to San Diego and the prisoners to Los Angeles. She then resumed her patrols off California and remained so occupied through the remaining months of the war. The gunboat continued her active service for almost a year after hostilities stopped in November 1918. On 16 October 1919, she was finally decommissioned for the last time at Puget Sound; and, four days later, she was transferred to the Washington State Nautical School. Vicksburg served as a training ship with the school until 1921. During this period, she received the designation PG-11 on 17 July 1920, when the Navy adopted the alphanumeric system of hull designations.

On 2 May 1921, Vicksburg was transferred once more, this time to the Coast Guard, and her name was stricken from the Navy list. She was renamed Alexander Hamilton on 18 August 1922 and served as a training ship at the Coast Guard Academy until 1930. The Coast Guard decommissioned her on 7 June 1930, stripped her, and towed her to the depot at Curtis Bay, Md., where she was permanently assigned as station ship. Sometime between 1 July 1935 and 1 July 1936, she was renamed Beta and, by 1 July 1940, she had been reassigned to New London, Conn., as a station ship.

In 1942, she was towed back to Curtis Bay where she served as a training platform for machinist's mates and water tenders. That duty lasted until 30 December 1944 when she was finally placed out of service completely. On 28 March 1946, the hulk was turned over to the War Shipping Administration for final disposition. Presumably, she was scrapped.