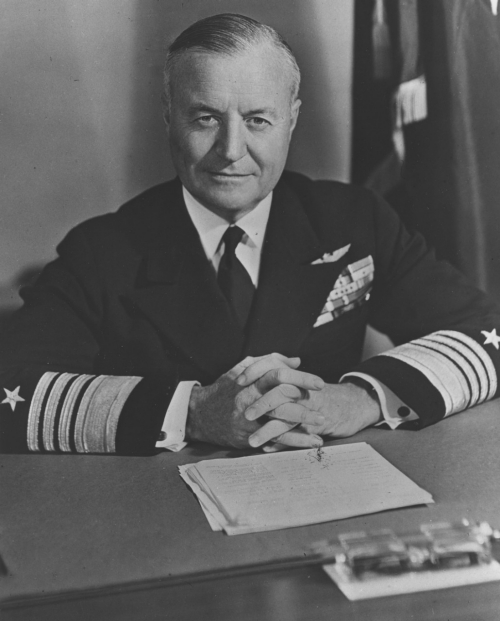 Admiral Forrest Sherman led the Navy during a decisive year of the Korean War and developed a global maritime strategy.

Born in Merrimack, New Hampshire, Forrest Sherman graduated from the U.S. Naval Academy in 1917 and earned his aviator’s wings in 1922. Quickly gaining a reputation as a superb planner, Sherman alternated aviation tours with increasingly important staff assignments during the interwar years. In 1943, the Navy assigned Sherman as Deputy Chief of Staff to Admiral Chester W. Nimitz, the Pacific Fleet commander, and in that capacity he helped plan the victorious Central Pacific campaign. Sherman was named Deputy Chief of Naval Operations for Operations in January 1946 and four years later Chief of Naval Operations. As CNO Sherman oversaw the buildup of the Navy during the first, critical year of the Korean War in which naval forces helped turned back the enemy tide. He also adapted the mission of U.S. naval forces to the strategic requirements of the North Atlantic Treaty Organization established in 1949. Recognized as a skilled strategic planner, Sherman promoted a maritime strategy for the new Cold War world. He was also a polished flag officer skilled in political military affairs. He died suddenly from a heart attack while on a diplomatic mission to Europe in the summer of 1951. Two destroyers, USS Forrest Sherman (DD-931) and USS Forrest Sherman (DDG-98), honor his memory.