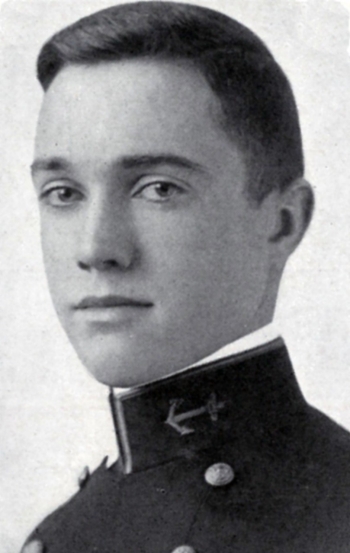 Photo of Midshipman McVay from Class of 1920 Lucky Bag.

Charles McVay is most known in U.S. naval history for captaining USS Indianapolis (CA-35) when two Japanese torpedoes from submarine I-58 struck and sunk her on 30 July 1945.  Survivors of the sinking drifted unknown in the Philippine Sea for four days and 880 sailors out of a crew of 1,196 were lost.  The loss of the Indianapolis, and failure of the Navy to recognize its non-arrival in port, remains one of the most tragic episodes in U.S. Naval history.  Captain McVay was court-martialed in the aftermath of the sinking and found guilty of recklessly endangering his crew by failing to zig-zag, in spite of I-58 Captain Mochitsura Hashimoto’s testimony at the trial stating that such maneuvers would not have changed the outcome of his attack.  The conviction effectively ruined McVay’s career.  It was controversial at the time and remains so today.  McVay had a distinguished naval career prior to the loss of Indianapolis.  He served as Executive Officer of the USS Cleveland (CL-55) during the North African landings in November 1942 and earned a Silver Star for his actions aboard the same ship in the Solomon Islands in March 1943.  From May 43-October 44, McVay chaired the Joint Intelligence Staff in Washington DC.  He took command of Indianapolis on 18 November 1944.  Under his command, Indianapolis participated in attacks on Iwo Jima, Tokyo, and was critically damaged by a kamikaze in the pre-invasion of Okinawa.  After refitting in Mare Island, California, Indianapolis delivered the components of the atomic bomb to Tinian.  She was sunk on her return to the Pacific Theater for the staging of an invasion of mainland Japan following this mission.  McVay died on 6 November 1968.  Secretary of Navy Gordon England ordered that a letter expressing Congressional exoneration of McVay be placed in his official file in 2001.