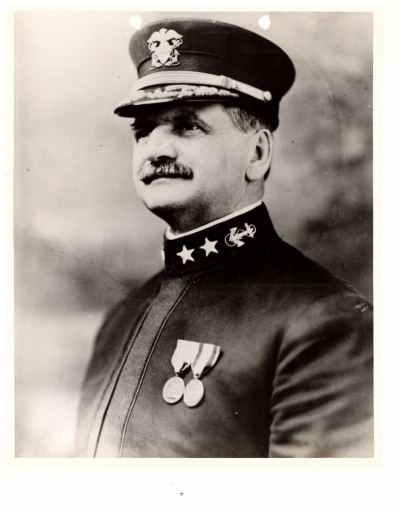 Admiral Robert Edward Coontz served as the second Chief of Naval Operations from December 1919 through August 1923.  He promoted the advancement of Naval aviation in period of force limitations established by the post-WWI Washington Naval Treaty.  Coontz’s advocacy for aviation helped make possible the conversion of USS Lexington (CV-2) and USS Saratoga (CV-3) from battlecruisers to aircraft carriers, a move that better prepared the U.S. Navy for operations in WWII.  Coontz, U.S. Naval Academy class of 1885, also served in the Spanish-American War aboard USS Patterson (Destroyer No. 36), USS Charleston (Protected Cruiser No. 2), and USS Boston (Protected Cruiser).  He was the Executive Officer of USS Nebraska (Battleship No. 14) on her 1908 round the world tour with the Great White Fleet.  In 1912 he served as Naval Governor of Guam before taking command of USS Georgia (Battleship No. 15) from 1913 to 1915.  During WWI, Coontz held duty as Commandant of the 13th Naval District and Puget Sound Navy Yard.  He also briefly acted as assistant to the Chief of Naval Operations.  After serving as Chief of Naval Operations in 1923, Admiral Coontz was Commander-in-Chief of the U.S. Fleet, which cruised to Australia and New Zealand in 1925, the first large display of the U.S. Navy’s reach since the Great White Fleet.  Admiral Coontz retired in June 1928.  In retirement he wrote his memoirs and became involved in Alaskan politics.  He passed in the Puget Sound Naval Hospital on 26 January 1935 and was buried in his Hannibal, Missouri, his home hometown.