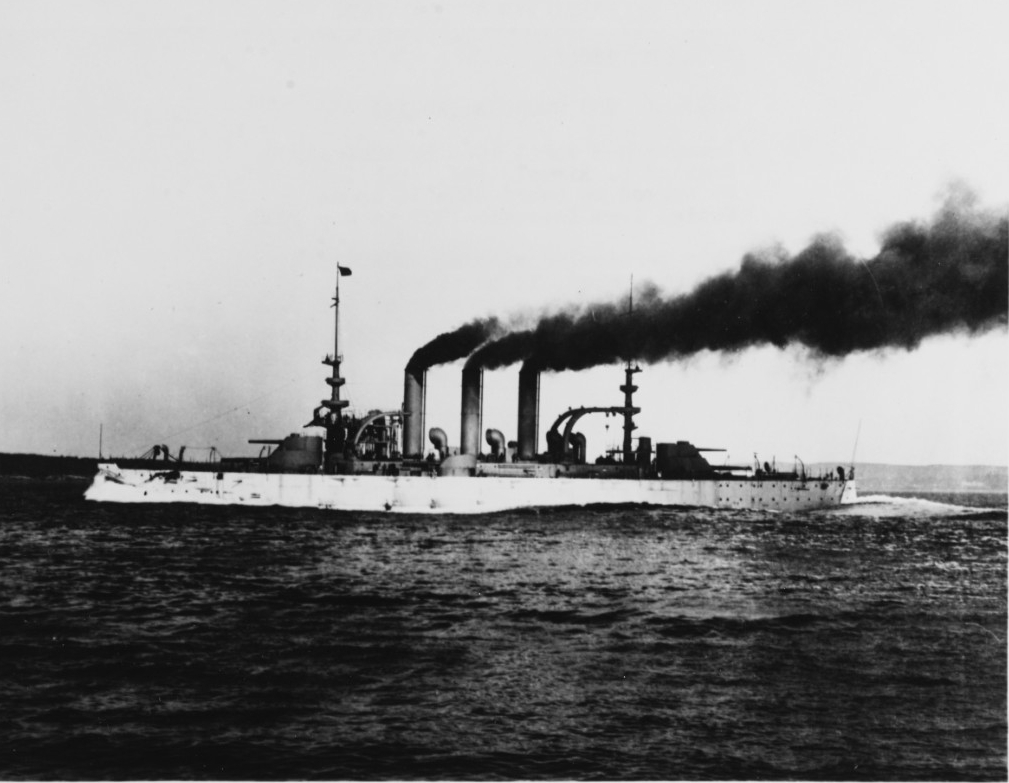 One of the 13 original colonies.

After Georgia was fitted out and completed a short shakedown cruise, she joined the Atlantic Fleet as flagship of Division 2, Squadron 1, Georgia departed Hampton Roads 26 March 1907 for Guantanamo Bay, Cuba, where she participated in gunnery practice with the fleet. After returning briefly to Boston Navy Yard for repairs, Georgia joined with other ships of the Atlantic Fleet in ceremonies opening the Jamestown Exposition. President Roosevelt and dignitaries present reviewed the fleet 10 June 1907, and 11 June was proclaimed "Georgia Day" at the exposition in special ceremonies aboard Georgia.

Georgia, next sailed with the fleet for target practice in Cape Cod Bay, arriving 15 June. During these drills 15 July, a powder charge ignited prematurely in her aft 8" turret, killing 10 officers and men and injuring 11. Condolences for the loss from this tragic accident were received from all over the world.

The powerful battleship then participated in the tercentennary of the landing of the first English Colonists 16 to 21 August 1907, after which she rejoined the fleet for battle maneuvers before mooring at League Island, N.Y., 24 September, for overhaul.

Arriving in Hampton Roads 7 December 1907, Georgia gathered with 15 other battleships, a torpedo boat squadron, and transports for the great naval review preceding the cruise of the Atlantic Fleet to the West Coast. On 16 December President Roosevelt reviewed the assembled "Great White Fleet" and sent it on the first leg of an around-the-world voyage of training, and building of American prestige and good will. Visiting many South American countries on their highly successful cruise, the fleet met with ships of the Pacific Fleet in another review in San Francisco Bay for the Secretary of the Navy 8 May 1908. Then Georgia, in company with other battleships and supply vessels, departed San Francisco 7 July 1908 for the second leg of the cruise, showing the flag and bringing the message of American sea power to many parts of the world, including the Philippine Islands, Australia, Japan, and Mediterranean ports. The fleet returned to Hampton Roads 22 February 1909.

Georgia continued to serve with the Atlantic Fleet in exercises and battle maneuvers, with periods of overhaul interspersed, until 2 November 1910 when President Taft reviewed the fleet prior to its departure for France. In an elaborate battle and scouting problem, Georgia and the other battleships continued their training, visiting Weymouth, England, and returning to Guantanamo Bay, Cuba, 13 March 1911.

From 1911 to 1913, Georgia continued to train and serve as a ceremonial ship, and 5 June 1913 participated in a 2-month practice cruise for Naval Academy Midshipmen. After a long overhaul period in Boston Navy Yard, Georgia arrived off the coast of Mexico 14 January 1914 with other fleet units to protect American interests in the troubled Vera Cruz-Tampico area. The busy battleship returned briefly to Norfolk, Va., in March, but was soon back cruising Mexican waters, and from August to October 1914 cruised off Haiti for the protection of American civilians in that country.

After another period of overhaul, Georgia joined the fleet off Cuba 25 February 1915 for winter maneuvers, and spent the rest of the year in training and ceremonial duties with the Atlantic Fleet Battleship Force. She arrived at Boston Navy Yard for overhaul 20 December 1915 and decommissioned 27 January 1916. 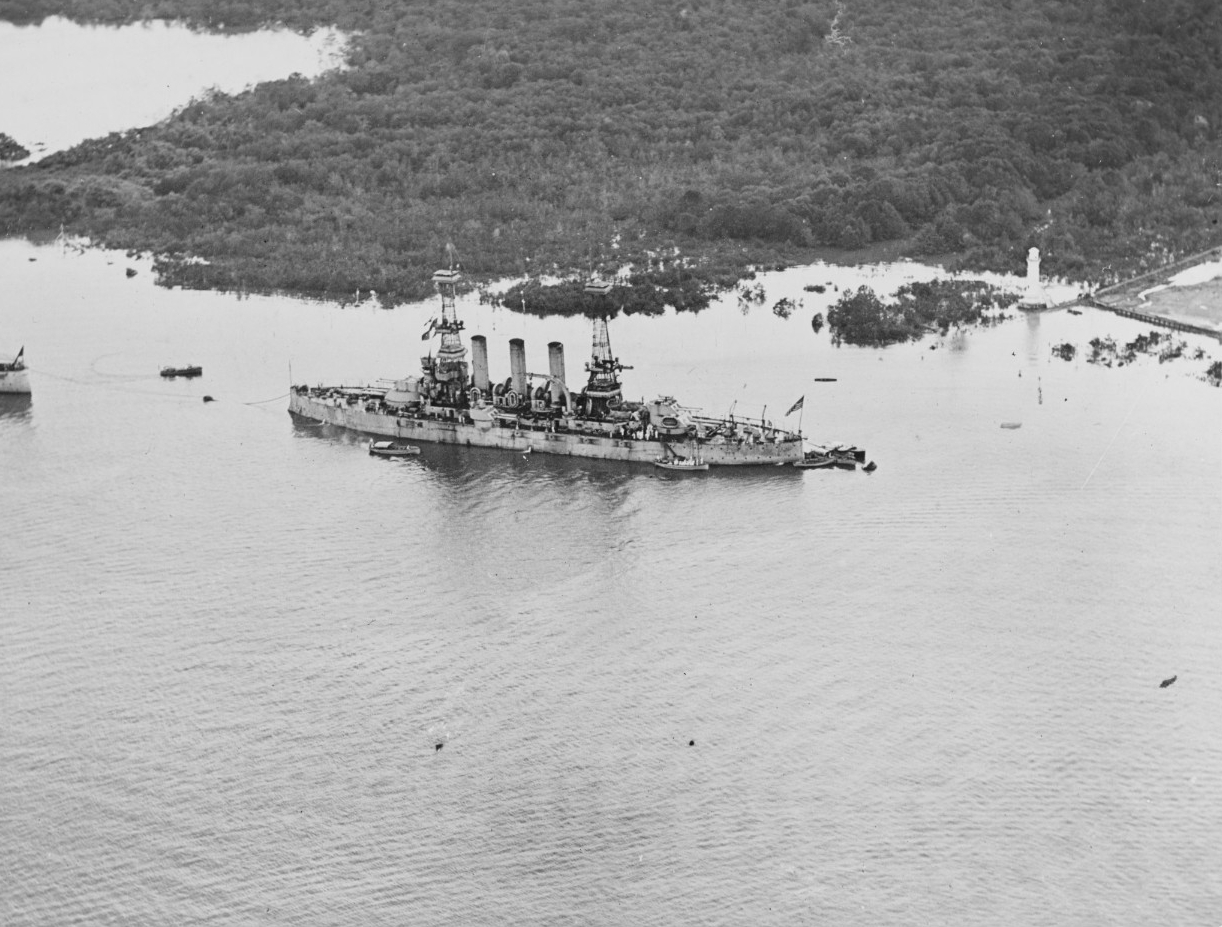 Assigned as a receiving ship at Boston, Georgia was called to duty at the outbreak of World War I, and commissioned again 6 April 1917. For the next 18 months, she operated with the 3d Division, Battleship Force, in fleet tactical exercises and merchant crew gunnery training, based in the York River, Va. She joined with Cruiser Force Atlantic briefly in September 1918 to escort convoys to meet their eastern escorts, and beginning 10 December 1918 was fitted out as a transport and attached to the Cruiser and Transport Force for the purpose of returning troops of the A.E.F. to the United States. Georgia made five voyages to France from December 1918 to June 1919 and brought home nearly 6,000 soldiers.

Georgia was next transferred to the Pacific Fleet as flagship of Division 2, Squadron 1. She left Boston for San Diego, via the Panama Canal, 16 July 1919, and after participating in ceremonial operations for 2 months, entered Mare Island Naval Shipyard for repairs 20 September 1919. Here Georgia stayed until decommissioning 15 July 1920. She was eventually sold for scrap 1 November 1923 in accordance with the Washington Treaty for the limitation of naval armaments, and her name was struck from the Navy List 10 November 1923.