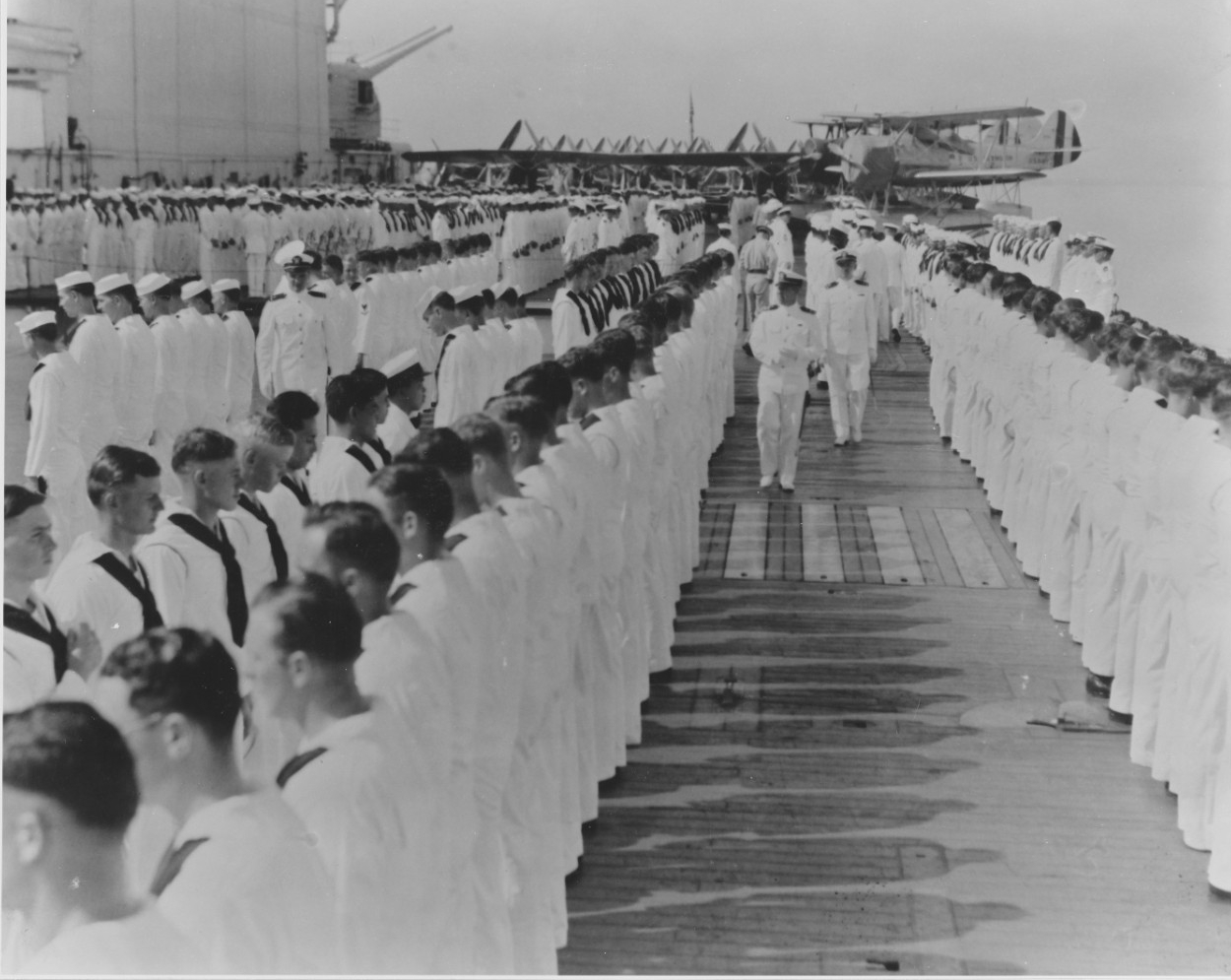 Personnel inspection on the flight deck of an aircraft carrier. (Naval History and Heritage Command. NH 109643)

Since its early beginnings, Navy personnel have always been the U.S. Navy’s greatest strength. Record keeping of personnel actions are a vital component of the Navy’s overall mission. Over the course of the Navy’s existence, personnel strength has fluctuated depending on capabilities, equipment, world events, and a host of other factors. For instance, during the American Revolution, personnel strength of the Navy peaked at more than 3,000, but after America won its independence, the Navy was disestablished and personnel strength went to zero. During World War I, the ranks grew to more than half a million, but after the Great War was over, the Navy shrank to less than 92,000. World War II marked the biggest increase in the Navy topping out at more than 3.4 million in 1945. Women Accepted for Volunteer Emergency Service (WAVES) made up the vast majority of personnel who would process the massive amount of paperwork WWII generated.

In addition to personnel strength, pay, quality of life, personnel actions, awards, decorations, unit history, distribution of mail, and a host of other actions are processed for all Navy personnel. Although this page is not all encompassing, links have been provided for historical research purposes. NHHC also provides resources for veterans to assist those attempting to locate records relating to their own military service. 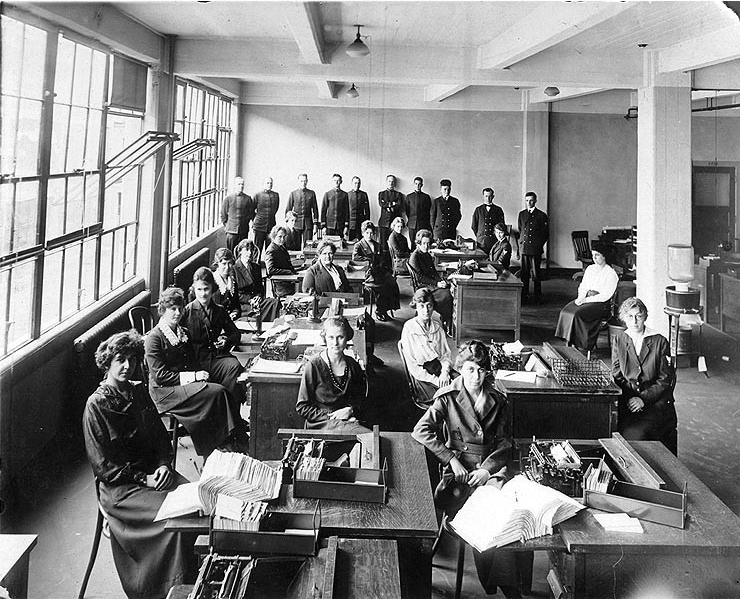 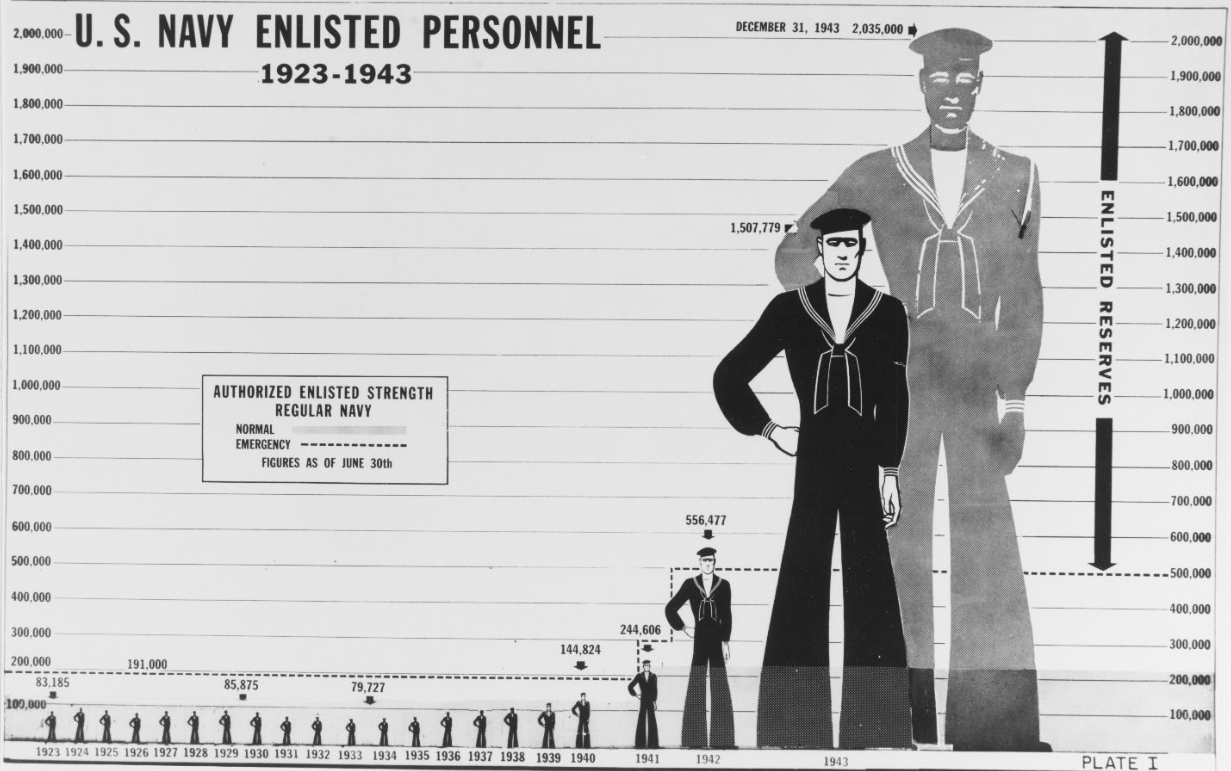 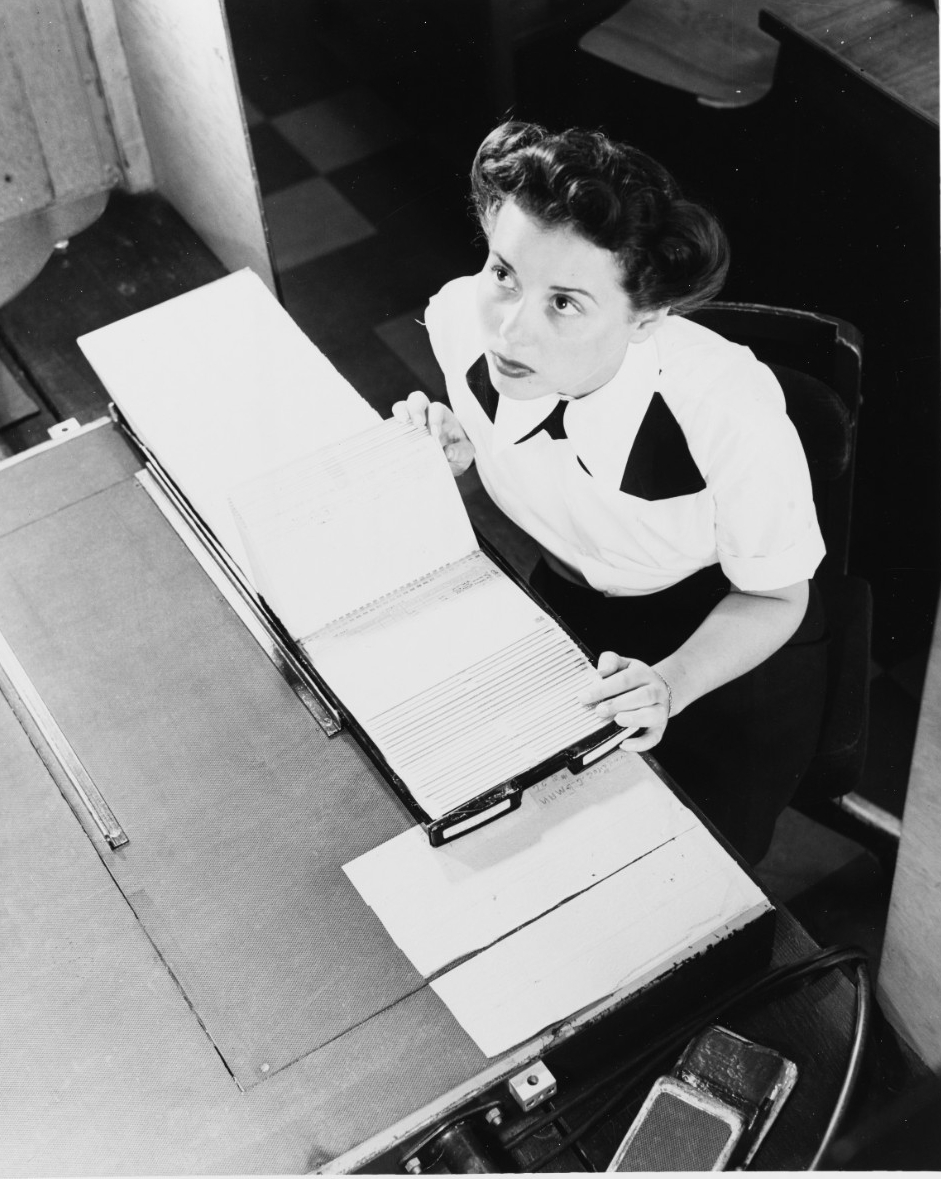 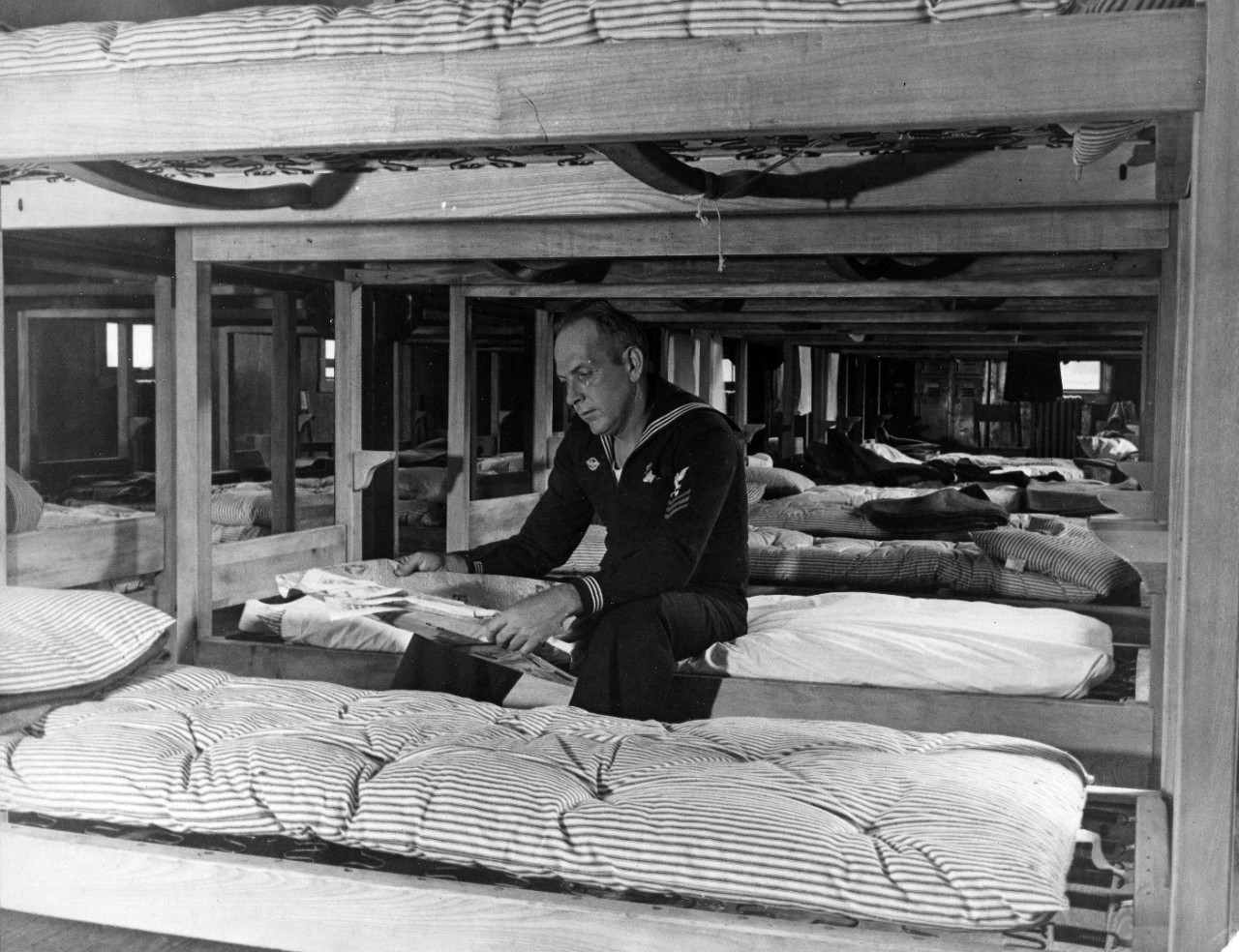 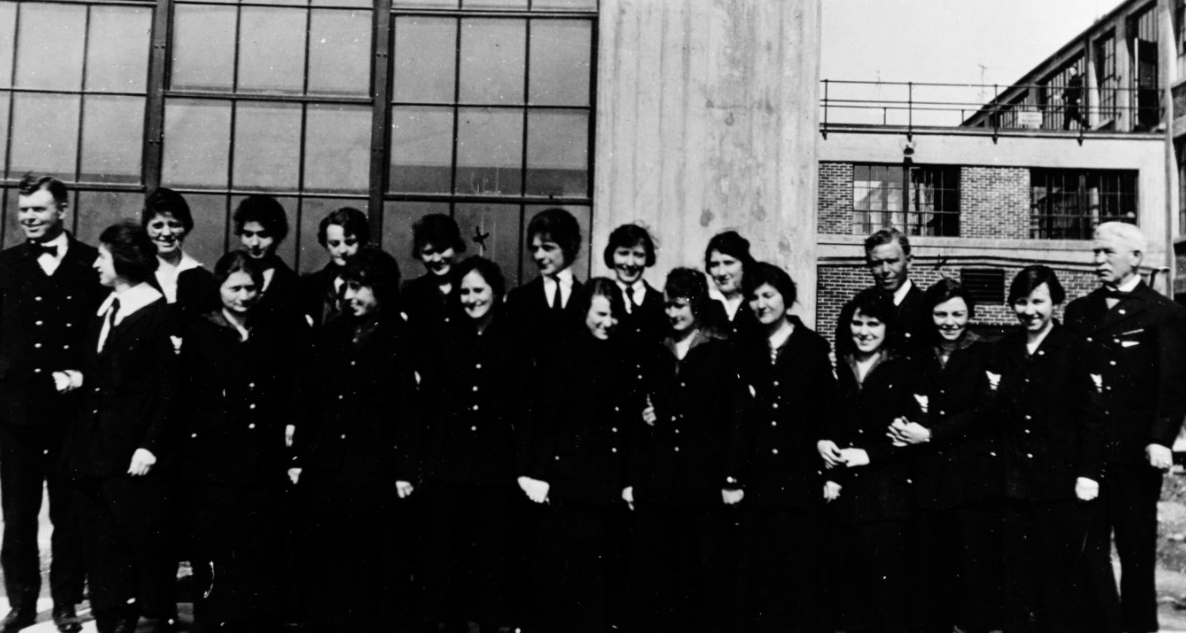 Personnel of the Payroll Department, Bureau of Navigation at the rear of one of the wings of the Navy or munitions building, Washington, D.C., December 1918. The people at right are (from right): Chief Shoales, unknown, Cora Dell Croft, Chief C.G. Patterson and Irene Haddigan. Eighth girl from left (marked by x) is Frances Gormley. Others present are unidentified. Courtesy of Mrs. Mabel Croft Graham, 1968. U.S. Naval History and Heritage Command photograph. Catalog#: NH 65575. 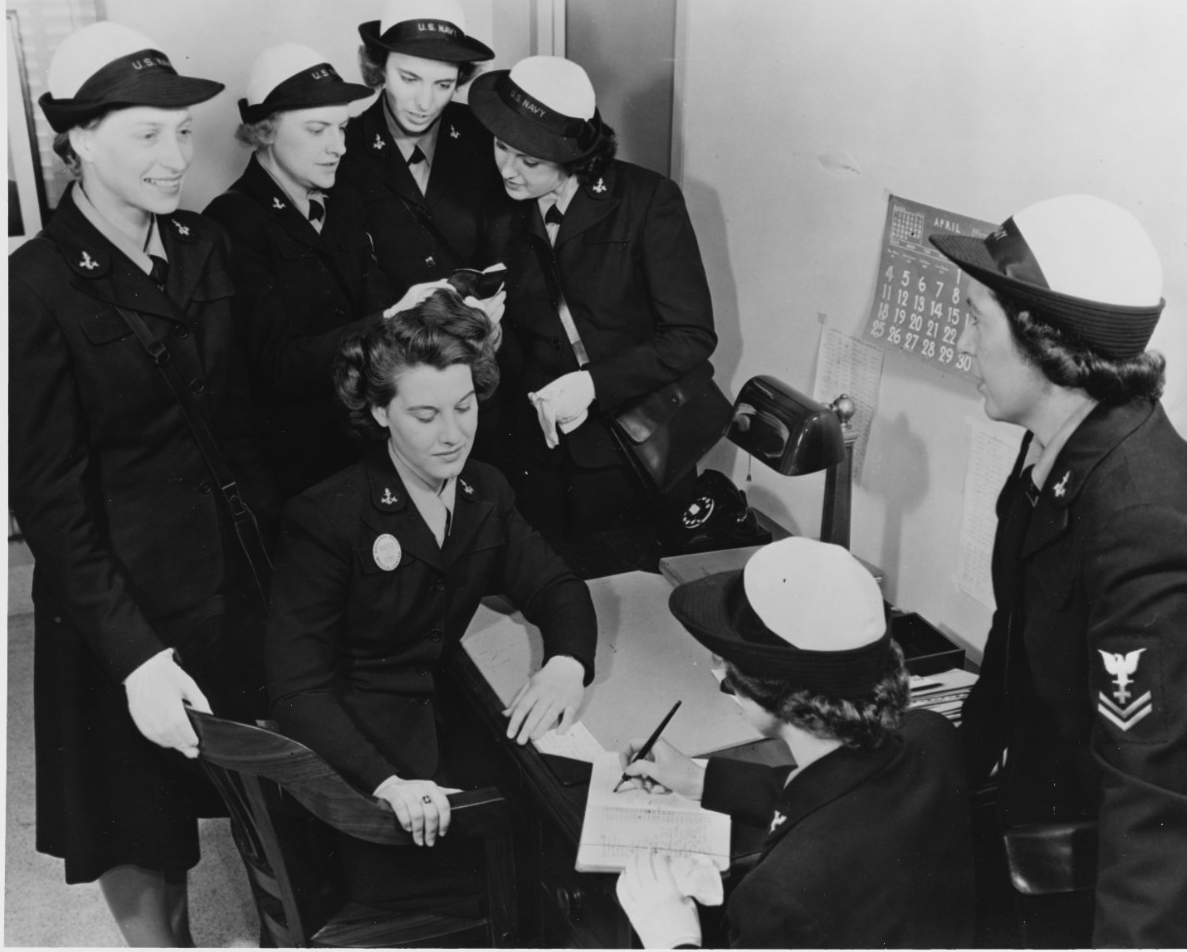 U.S. Navy enlisted WAVES registering in the liberty log at the Master-at-Arms' office of a naval facility, April 1943. The Master-at-Arms' is seated in left center, wearing the badge of her position. Location may be the U.S. Naval Hospital, Behtesda, Maryland. Official U.S. Navy photograph now in the collections of the National Archives. Catalog#: 80-G-41038.

Registering in the liberty log, at the Master-at-Arms' office of a Naval facility, April 1943. The Master-at-Arms is seated in left center, wearing the badge of her position. Location may be the U.S. Naval Hospital, Bethesda, Maryland. Official U.S. Navy Photograph, now in the collections of the National Archives. 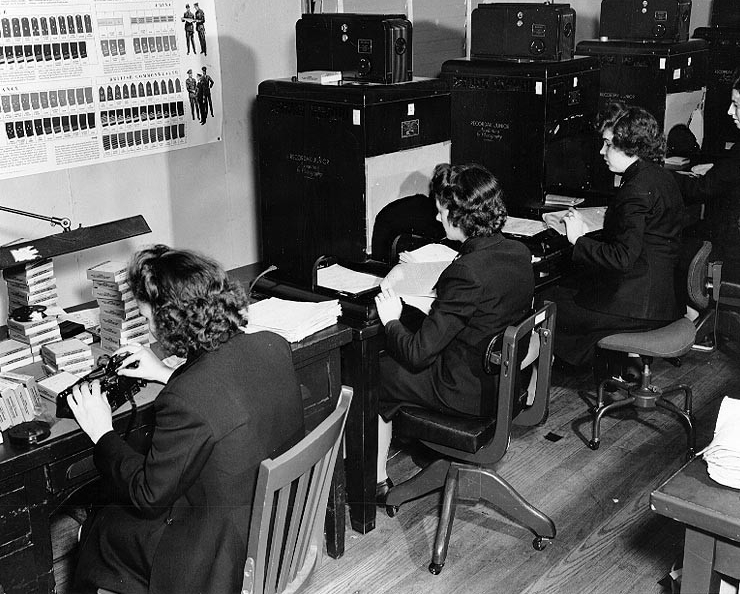 WAVES microfilming vouchers using methods similar to those employed for V mail and for the same reason: to save paperwork, time, and red tape at the Bureau of Supplies and Acounts, Washington, D.C., 23 February 1945. Large machines in center and right are marked Recordak Junior. Note poster in upper left, exhibiting officer rank insignia for the USSR, China, France and the British Commonwealth. Official U.S. Navy photograph now in the collections of the National Archives. Catalog#: 80-G-120010