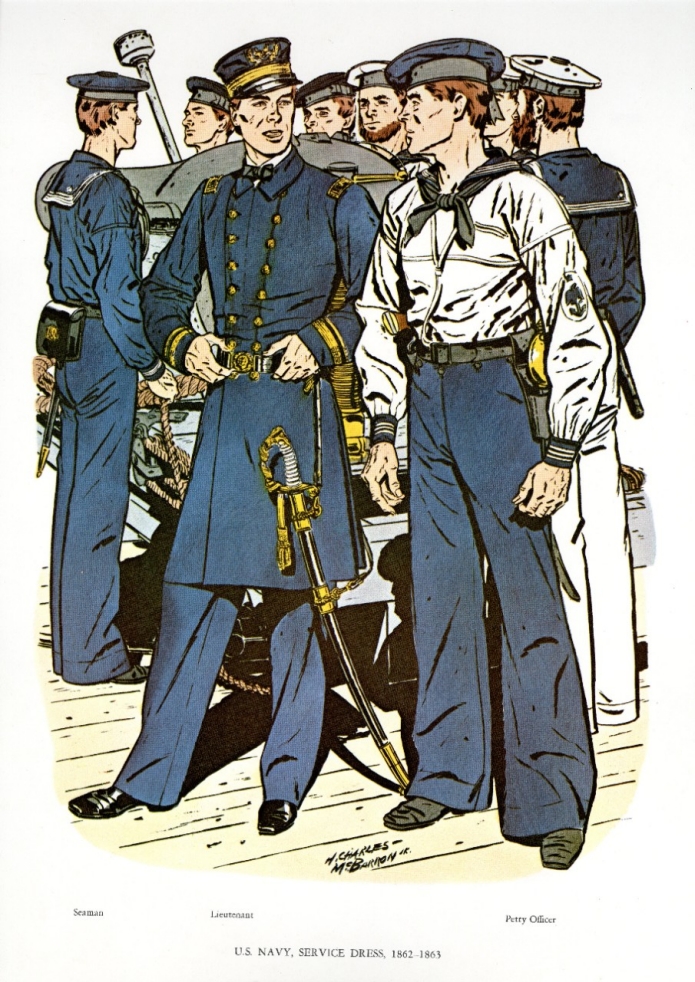 The uniform of the United States Navy during the Civil War was governed by the 1852 order with changes to meet the need of an expanding Navy. A Uniform Change issued by Secretary of the Navy Gideon Welles on 31 July 1862, directed that the full dress coat be omitted from an officer’s wardrobe, and that the undress frock coat of 1852 be used for full, undress, and service dress. In full dress the coat was worn with epaulets, cocked hat, sword and sword knot; in undress, either epaulets or shoulder straps could be worn, and the cap replaced the cocked hat; in service dress, shoulder straps and a cap were worn. The gold laced full dress trousers were not to be worn under this change. A less formal and more comfortable coat was authorized for service dress, the single or double-breasted blue jacket with the same number of buttons as authorized for the frock coat, and with shoulder straps and cap, with the gold lace stripes of rank on the coat sleeves.

An Act of Congress of 16 July 1862, “To establish and equalize the Grades of Line Officers of the United States Navy” created a new rank structure for the ever growing Federal Navy, which was made up of ships of all sizes and types, from new ironclads to converted merchant ships and ferry boats. The rank of rear admiral was finally authorized, and the previous title of “flag officer” was changed to “commodore”.  The rank of lieutenant-commander was set between that of commander and lieutenant, and a new junior rank of ensign was created. To identify the officers of this expanded list, it was of course necessary to modify the existing instructions.

The use of the three-quarter inch wide sleeve lace introduced in 1852 was continued, to be supplemented by strips of quarter inch lace. The uniforms for staff officers was covered by a single paragraph in the 1862 order: “Coats of all other officers to be the same as now prescribed for undress of their respective grades, except that all cuffs will be closed and without small buttons, and with the same arrangement of lace as that worn by ‘line officers’ of the same relative rank.” Since relative rank had been officially established for surgeons, paymasters (title changed from purser in 1860) and engineers prior to 1859, these officers had been permitted to wear the lace of their relative rank on their sleeves. The indications of their non-combatant status were the staff corps devices on caps and shoulder straps, and the lack of insignia of any type on their epaulets.

The revised rank structure made a change in line insignia necessary. It is to be noted that the epaulet and shoulder strap insignia designs of 1852 were modified and extended by the official 1862 change. The cap devices, basically those of 1852, were carried forward to cover the new rank pattern. The cap device was to be worn above a band of gold lace for all officers except Professors of Mathematics and secretaries, who had no distinctive device. These two classes of officers wore the wreath of oak and olive leaves only, above a blue cap band. No head cover was prescribed for chaplains although they had been directed to wear a blue uniform, single-breasted with a row of nine buttons, and plain cuffs. In practice, chaplains wore the blue cap without any decoration.

The lieutenant, in command of the gun crew, shown in the painting, is in the service dress of the 1862—1863 period, with the one wide strip of lace and a second narrow lace on his sleeves. The present insignia of a lieutenant, two bars, appear at either end of the shoulder straps, but in gold, against the blue background of the strap. Silver bars were worn on epaulets only. The cap device is that of the three junior officers; lieutenants, masters, and ensigns.

The dress of the enlisted men of the gun crew is but little changed from that prescribed in 1852, with only minor modifications in the cut of the clothing. White frocks, or jumpers, retained the blue faced collars and cuffs of the 1841 regulation, but the white collars and cuffs for blues directed by the 1852 order had been removed by a change in 1859. It is to be noted that the petty officer displays no form of rating badge, only the device worn by all petty officers, that introduced in 1841 and modified by the addition of the star in 1852. It is possible to determine the man’s rating for the petty officers’ distinguishing mark was worn on the right arm by boatswain’s mates, carpenter’s mate, gunner’s mates, sailmaker’s mates, ship’s stewards and cooks only. Other ratings showed the mark on the left arm, and since the petty officer is in the gun crew, he is evidently a quarter gunner.