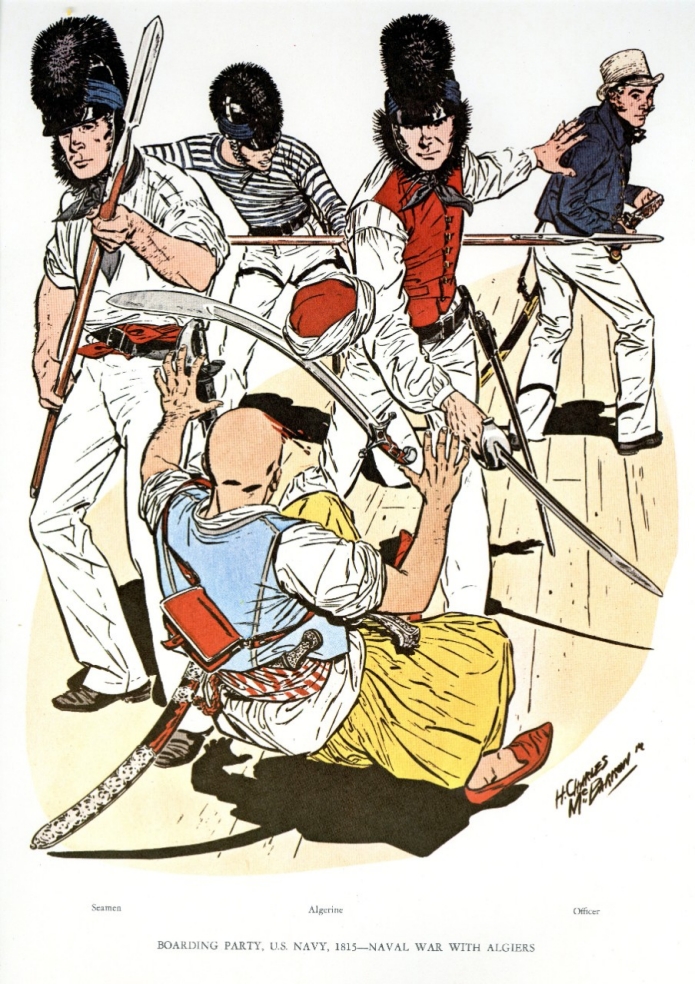 The United States, after the end of war with Great Britain in 1815, had sufficient naval strength to take action against the Barbary Coast pirates. After paying tribute to the Dey of Algiers for almost twenty years for protection from his corsairs, the United States decided to act. Congress, on 2 March 1815, declared war against Algiers.

Under Commodore Stephen Decatur, a ten ship squadron sailed from New York on 29 May 1815 and on 18 June captured the Algerian frigate Mashuda of 46 guns. On the 19th, the brig Estedio of 22 guns was captured by the squadron. Decatur proceeded to Algiers on the 28th, and the Dey, realizing he was no match for the Americans, concluded a treaty ending the system of tribute and the enslavement of Americans on the 30th of June, less than six weeks after the squadron had sailed from New York.

Although the uniform instructions of 1813 had provided for the dress of officers of the United States Navy, no provisions were included for clothing the enlisted personnel. However, the dress of the men was reasonably standard, for all ships carried clothing in “slop stores” under control of the purser. Clothing was procured under contract at the Navy Yards, stored and issued to the vessels. The invitations to bid on clothing contracts listed blue and white trousers, shirts, vests, jackets and glazed hats. This clothing is shown in paintings and sketches of the period and was very much like that worn by the Royal Navy.

The standard arms of seamen were the pike and cutlass shown in the painting. The weapons were stored aboard ship in racks on deck so they were readily available to the men in time of combat. The pike corresponded basically to the musket and bayonet of the Marines attached to the ship for close fighting. The boarding helmets are typical of the period which were described in Samuel Leech’s Thirty Years from Home, or a Voice from the Main Deck, published in Boston in 1843. Leech was a British seaman, captured on board the Macedonian in 1812, who later enlisted in the United States Navy. When he signed on the brig Syren June 1813, he noted that all hands were supplied with “stout leather caps, something like those used by firemen. These were crossed by two strips of iron, covered with bearskins, and were designed to defend the head, in boarding an enemy’s ship, from the stroke of a cutlass. Strips of bearskin were likewise used to fasten them on, serving the purpose of false whiskers, and causing us to look as fierce as hungry wolves.”

The officer shown is a warrant, wearing the short blue coat, with a rolling collar, prescribed for boatswains, gunners, carpenters and sailmakers under the 1813 uniform order. The straw hat is the warm weather version of the black round hat specified for the forward warrant officers in full dress. The round hat was also worn by commissioned officers in undress and many contemporary portraits of the War of 1812 show this headgear along with the short jacket. This was a more suitable garb for shipboard duty than the undress coat of the 1813 order which was a tail coat like that of full dress, but with a rolling cape or turndown collar instead of the formal standing one. While commissioned officers were directed to wear white trousers in full dress, the warrants wore blue trousers. However, it had been the practice for some time to wear white trousers in undress or service dress in tropical climates even though they were not covered by the regulations.

In his painting the artist has portrayed a boarding party as it may have appeared during this period.