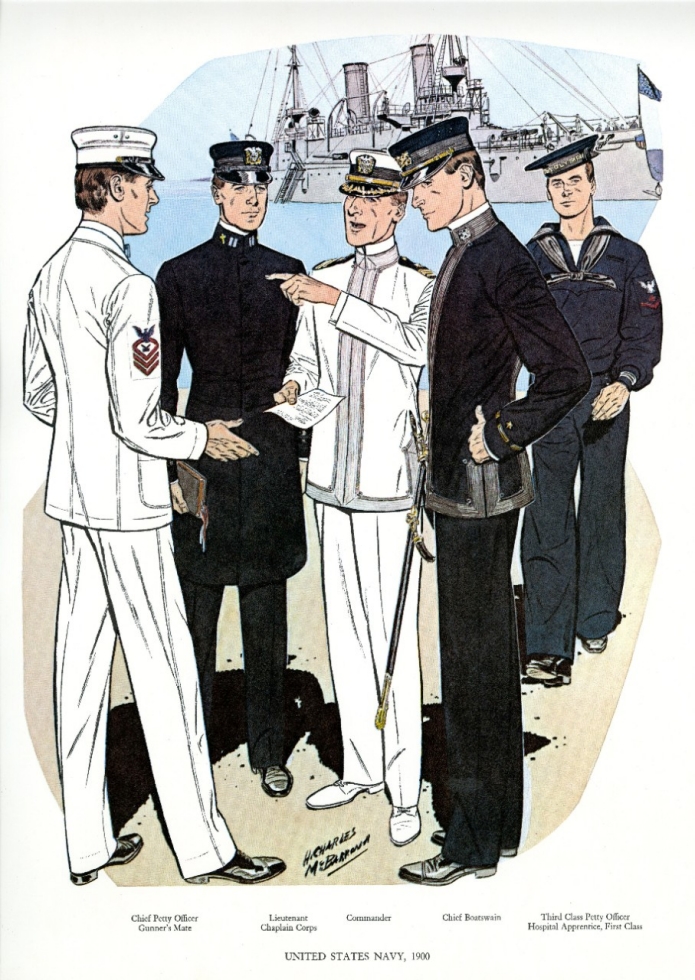 Although the Navy’s dress in 1900 was basically that of the Spanish-American War period, three major factors caused some changes. First was the 9 May 1899 “Change” to the standing 1897 Uniform Regulations. Labelled “Change”, it may be regarded as a new regulation in its entirety. Second, on 17 June 1898, by Act of Congress, the Hospital Corps was established. Last, the rank of Chief Warrant Officer was created on 3 March 1899.

The 1899 “Change” little affected the uniforms for officers. Except for providing distinctive insignia for the rank of Admiral (George Dewey had just been promoted to this newly reinstated rank); slightly altering the chaplain’s uniform; and adapting the existing instructions covering officers’ uniforms to accommodate the new rank of Chief Warrant Officer, officer uniforms remained as under the 1897 instruction. One corps device of long standing did not appear in the revised instructions effective in 1900. Members of the Engineer Corps were incorporated into the Line and now used the star of the Line as their device instead of the four silver oak leaves which had been the insignia of engineers since the Civil War period. In the enlisted section, modifications dealt chiefly with devices for members of the newly created Hospital Corps.

The Chief Petty Officer Gunner’s Mate is shown in the dress white uniform. The white sack coat, a direct descendant of the coat introduced in the 1860’s for certain leading petty officers, had five fire-gilt buttons on the breast, all of which were to be buttoned. The rating badge for the white uniform consisted of three chevrons and an arc in scarlet cloth with the eagle and specialty mark embroidered in blue. The two crossed cannon, still the specialty device for gunner’s mates, were first introduced in 1866. The rating badge, worn on the right arm, indicates a member of the starboard watch. The white shirt was to be worn with stiff collar and stiff detachable cuffs, the prevailing style of the period.

An attempt was made by a change of 23 December 1898 to give the chaplain a uniform more closely resembling that of other commissioned officers. Rather than “…the dress commonly worn by clergymen…” as called for in the 1897 Regulations, chaplains were now permitted to wear a Navy cap with the cap device of a commissioned officer but with black mohair buttons and chin strap. Commanders displayed a black mohair strip on the edge of the cap visor rather than the half inch wide gold lace of other staff officers, or the gold acorns and oak leaves of the senior Line officers. Although not allowed to wear the special and full dress uniforms of other officers, chaplains were permitted to wear a frock coat with certain modifications. The coat was single-breasted with a row of seven black covered buttons, to be worn fully buttoned and with the collar standing. The frock coat for other commissioned officers was double-breasted with two rows of gilt buttons, the collar turned down and the upper part of the lapels showing. Unlike other commissioned officers who wore epaulets or shoulder straps on the frock coat, the chaplain’s grade appeared on either side of the standing collar with the gold Latin cross, introduced in the Civil War, behind the rank insignia. In addition, lustrous black braid instead of gold lace was worn on the sleeves as pictured in the accompanying plate showing a Lieutenant Chaplain.

The Line commander is shown in the white service dress uniform. The pattern of the coat with its fly front and standing collar, trimmed with white braid, was exactly the same as the blue service coat trimmed with black braid. Another difference is that shoulder marks, first introduced in 1899 to replace the earlier shoulder straps, were used to indicate officer grades rather than the collar devices worn on service blues. The insignia of the Line commander was as it is today, three stripes of half-inch gold lace with a gold star. Similarly, the cap visor shows the gold oak leaves and acorns of today’s commanders and captains.

When the senior warrant officers gained commissioned status, a change in the uniform instructions was necessary to provide means of identifying the new officer rank. Under the 1897 Regulation, warrant officers wore the same frock coat as other officers, except chaplains, with their devices on the collar. Those with twenty years of service had the devices in silver and those with less than twenty years of service, in gold. The 1899 “Change” directed that the nine button double-breasted frock coat be worn with only the lower six buttons fastened and with the upper part of the lapels turned back. The 1899 instruction also directed that chief warrant officers show on the sleeves of the blue frock and service coats a stripe of half inch wide gold lace interwoven with dark blue silk so that the blue breaks the gold stripe with half inch bars at two inch intervals. Chief warrant officers continued to wear their devices on the collar but now silver devices were worn only by chief warrants. The gold devices were worn by the junior warrant officers, regardless of their years of service. The chief boatswain shown in service blues wears the silver crossed anchors of his specialty on either side of the collar and the gold star of the Line just above the newly introduced sleeve lace. The star of the Line was worn by chief gunners and chief boatswains 1/4 of an inch above the sleeve lace; boatswain’s mates, gunner’s mates and warrant machinists wore the star four inches from the edge of the sleeve. The cap device remained the two crossed gold foul anchors, and in lieu of the half inch wide gold lace chin strap of other commissioned officers, except chaplains, the width of the strap was limited to a quarter of an inch.

General Order No. 493 of 25 June 1898 implemented the Act of Congress which established the Hospital Corps. The ratings of apothecary and bayman were replaced by those of pharmacists, hospital steward, hospital apprentice first class and hospital apprentice. The hospital apprentice first class, rated as a Third Class Petty Officer, is shown with the single scarlet chevron and white eagle, and the new mark of the Hospital Corps, the Geneva Cross in red, instead of the caduceus formerly used to identify enlisted medical personnel. Wearing the rating badge on the left arm indicates that he is assigned to the port watch. As a petty officer, the Corpsman has three stripes of white tape on his cuffs as well as on his collar.