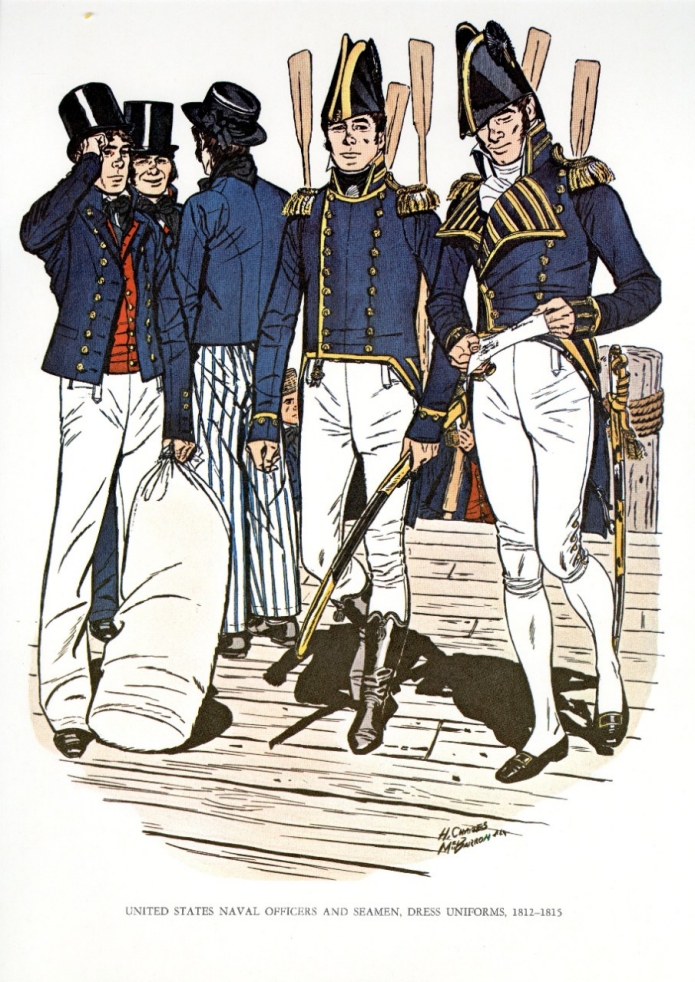 Officers of the United States Navy during the War of 1812 were governed by two distinct uniform instructions, those of 1802 and a new order issued in 1813. The early 19th century was a period of changing military dress, for most European countries were involved in a series of wars growing out of the French Revolution and the establishment of the French Empire under Napoleon. The change in military costume was a partial reflection of the changes in civilian costume of the period. The cocked hat was generally replaced by the chapeau de bras, and long trousers took the place of breeches, stockings and shoes. Contemporary portraits indicate that the modifications of military costume in Europe brought about changes in the dress of the United States Navy even before the 1813 order was released. Military costume tends to have a similarity in all countries at any one period.

That there were changes in the uniform of the Navy is indicated by the preamble to the “Regulations for the Uniform and Dress of the Navy of the United States” approved by Secretary of the Navy William Jones on 23 November 1813. This forwarding note reads as follows:

“A NUMBER of senior officers of the Navy of the United States, having suggested certain alterations in the established ‘Uniform Dress’, which in their opinion, would greatly conduce to the convenience and comfort of the officers, and still retain an appearance equally elegant and consistent; the following description of the Uniform Dress for officers of the Navy of the United States is substituted for that hitherto established; and is to take effect on the first day of January 1814, to which, all officers therein designated, are ordered to conform.”

The description of the full dress coat for the senior officers in the 1813 order, “The COAT of blue cloth; with broad lapels and lining of the same; a standing collar...” is very similar to the description of the 1802 order, except in 1802 the lapels were to be long. Instead of the breeches of 1802, all officers were directed to wear pantaloons. In a period of transition one finds men dressed in both the old uniform, the new one, or in combinations of both. This is reflected in the illustration.

For the full dress coats of the combatant officers, the lace trim on the collar, around the lapels and cuffs, and, in the case of a captain, on the pocket flaps, was carried over from the 1802 order. No mention was made of gold lace or embroidery at the buttonholes in 1813, however. Officers wore nine buttons on each lapel and a captain had four buttons at the pockets and on the cuffs. The lieutenants, as in 1802, had but three buttons at pockets and on the cuffs. In this period there was a rank between captain and lieutenant, that of master commandant, today’s commander. The rank of master commandant had been established by Congress in 1799 to fill the need for more than two officers who could command at sea. The expansion of the Navy during the Quasi-War with France permitted operations by squadrons and a rank lower than captain was required. At the end of the French affair, in 1801, the peace establishment act made no provision for master commandant, so the uniform instructions of 1802 naturally made no provision for their dress. To meet the need for protecting the growing American commerce in a world generally at war, Congress in 1806 re-established the rank. No change has been located to the 1802 order so we are at a loss to determine how this class of officer was uniformed, but the dress as prescribed in 1813 was undoubtedly that worn prior to the order. A master commandant was instructed in 1813 to wear the same uniform as a captain, with no lace on the pocket flaps, no button on the standing collar, but with the four buttons at the pockets and cuffs. The master commandant wore but one epaulet, on the right shoulder, while lieutenants wore theirs on the left.

While the 1813 instructions made no reference to gold laced buttonholes, many contemporary portraits show the lace at the lapels, pocket flaps and cuffs. Portraits of officers wearing medals struck by order of Congress in appreciation of their service during the War of 1812 show them in coats of the 1813 period, some with laced buttonholes and others without this decoration.

The captain on the right in the painting is shown in the uniform depicted in Thomas Sully’s painting of Captain Charles Stewart done in 1811—1812. The other officer shows the uniform in paintings by Jarvis of Hull, Macdonough and others, painted at the end of the war, and Gilbert Stuart’s painting of Commodore Bainbridge.

While there are many portraits of officers in the early 19th century, there are few illustrations of the dress of seamen, and the instructions did not cover the men. Jarvis in his painting of Oliver Hazard Perry at the Battle of Lake Erie, painted in 1816, shows the men in blue jackets, scarlet waistcoats, white trousers, and glazed hats. A drawing of the launching of the Demologos, the Navy’s first steam ship, designed by Robert Fulton, shows seamen in short jackets, vests, trousers and round or tarpaulin hats. Another excellent source of information on the men’s dress in this period is the large number of drawings and paintings of men of the British Navy in 1812—1815. As in earlier periods, the American sailor wore the same basic dress as his British counterpart. A British seaman, taken prisoner when his ship, the Macedonian, was captured by the United States frigate United States, wrote that he was able to attend a public dinner in New York with his new American friends, merely by having his landlady cover the British anchor buttons of his jacket with blue cloth. For the dinner, American seamen had been issued new uniforms, blue jackets, scarlet waistcoats, blue trousers, neckerchiefs and glazed hats. It is evident, that while the clothing for enlisted personnel was not spelled out in official regulations, a high degree of uniformity did exist.