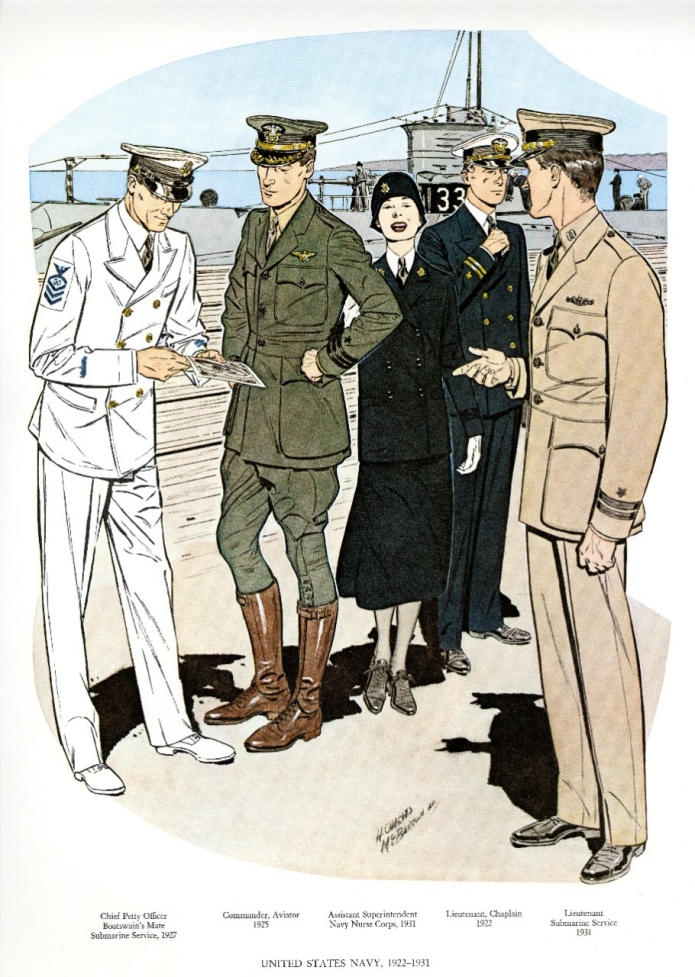 As could be expected, the first uniform instruction released after the end of World War I included items of dress developed during the war, restored some of the more formal and decorative uniforms suspended during hostilities and dropped some articles of clothing. A Bureau of Navigation Circular Letter of 13 October 1922 notified all hands that a new regulation would soon be issued and indicated some of the changes to be made. The special full dress body coat with tails, which had been introduced in 1802, was dropped. The frock coat, originally the undress coat, was to become the most formal coat of the Navy. Another important change was the abolishment of the aviation uniform, unofficially adopted in 1912-1913 and made part of the official instructions in 1917 when Naval Air was coming into its own. It is difficult, at this late date, to find a valid reason for doing away with a most serviceable uniform and providing nothing but dungarees for a working dress! Before too many years, the aviation uniform would be back in the official regulations.

The Chief Boatswain’s Mate is shown in the white dress uniform of the 1922 order. The double-breasted coat had four gilt Navy buttons on each side. Although the coat was similar to that of the 1913 Regulations, the new version reflected the change in styling of the officer’s blue sack coat, adopted in 1919, for the lapels were longer and the coat shorter. The boatswain can be identified as one qualified for submarine service for the right sleeve shows a distinctive device. The insignia shows the bow of a submarine, flanked by horizontal dolphins. The use of dolphins to identify members of the Navy’s underseas service is most appropriate for this fish is at home on the surface and underwater. On white clothing, the device was embroidered in blue; on a blue uniform, the embroidery would be in white. The rating badge is typical for a chief petty officer, three chevrons, an arc, an eagle and a specialty mark, in the case of a Boatswain’s Mate, two crossed anchors. On the white uniform, all portions of the rating badge are in blue. For wear on a blue coat, the chevrons and arc would be in scarlet cloth, the eagle and specialty mark, white. The chief’s cap was identical to that of a commissioned officer. The device was the gilt foul anchor on which the letters “U.S.N.” in silver had been placed, first introduced in 1897 and still employed by chief petty officers. Instead of the gold lace thin strap of a commissioned officer, chiefs had straps of black patent leather. The white shirt followed the pattern set by the introduction of the officer’s blue sack coat, namely, white with a turndown collar and a black four-in-hand tie instead of the standing collar and bow tie of the 1913 instructions.

The lack of a suitable uniform for aviation duty had been a matter of concern and discussion ever since the Bureau of Navigation had advised that it would be dropped in October 1922. On 22 June 1924, the Chief of the Bureau of Aeronautics directed a letter to the Secretary of the Navy strongly recommending the authorization of a kahki uniform for summer wear and a heavier one for cold weather. He suggested that such a uniform could be used to advantage by all officers whose duties involved working with machinery. This idea became a reality just prior to World War II! A working dress was authorized on 8 April 1925 for “Naval Aviators, Observers and Other Officers detailed to duty involving flying.” The newly authorized coat was not like that of the recent war but a modification of the new service blue sack coat. The self-belted, single-breasted khaki coat was fastened with three bronzed buttons, had a rolling collar, notched lapels, a pocket on either breast and two lower bellows pockets. The forestry green winter coat was similar but had bellows pleats in the back at the shoulders to permit a greater freedom of movement. Instead of using shoulder marks as in World War I, black braid was use on the sleeves to indicate grade with the star of the Line embroidered in black above the stripes. Under the 1925 change, only breeches and puttees were to be worn with the aviation coats. A change of 1 May 1929 permitted regular trousers to be worn. With both the summer and winter uniforms, a soft collared kahki shirt and black tie were worn. The commander shows the three black braid stripes of his grade on the sleeves and the star of the Line. The cap visor displays the gold embroidery for all officers of the grade of commander and captain. The device to indicate an officer qualified for aviation duty is worn on the left breast. It is like that used in 1917 and could be either a bronzed, gold-plated pin-on device or one of gold embroidery, sewed to the coat.

The Navy Uniform Regulations of 20 September 1922 when finally released, made no provision for members of the Navy Nurse Corps. A separate publication, “Uniform Regulations, United States Navy Nurse Corps,” was issued in 1924 and modified in 1927 and 1929. The coat of the outdoor uniform was blue-black, double-breasted with three black buttons on each forepart. The cut was similar to the male officers’ sack coat with a roll collar and notched lapels. Black silk braid was used on the sleeves to indicate the nurses’ grades. The Superintendent of the Corps showed two stripes of half-inch wide braid with a quarter inch wide stripe between them; assistant superintendents, two half-inch wide stripes; chief nurses, one half-inch wide stripe and one quarter-inch wide stripe, and nurses, a single half-inch wide braid. An embroidered corps device, the gold foul anchor with the gold oak leaves and acorn on it with the letters “N.N.C.” on top, was sewed on either end of the collar. The white shirtwaist was of silk or cotton and had a stand-up, turndown collar. A black silk or satin tie was worn, tied four-in-hand. The gored skirt under the 1924 order was to reach not more than 10 inches from the deck; this was changed in 1929 to permit the skirt to be 12 inches from the deck. The blue-black plush hat bore a close resemblance to civilian women’s headpieces of the 1920’s. The display of a metal corps device on the right side of the front gave the hat a military touch. The same metal device was displayed on the collar of the white outdoor coat, similar in cut to the blues, and on the collar points of the waist of the white ward uniform. Black shoes and stockings were worn with the blue uniform; white shoes and stockings with both the ward uniform and the outdoor whites.

Under the 1922 instruction, chaplains were permitted to wear all items of clothing prescribed for commissioned officers except the gold laced, full dress trousers, the cocked hat, epaulets and the sword. As authorized shortly after World War I chaplains showed their grade on the sleeves with gold lace, and, as other staff officers, displayed their corps device, the Latin cross in gold, above the lace. The Chaplain Corps lieutenant is wearing a white shirt with the detachable stiff turndown collar specified by the regulations. Shirts could not be worn with soft collars and this remained in effect until just prior to World War II when shirts with attached semi-stiff collars were permitted.

When the 1922 order was released, the working dress for officers assigned to the submarine service remained as it had been under the 1913 instructions—dungarees. Six years after the aviation dress was reinstated, a suitable and serviceable uniform was authorized for submariners. Change 7 of 31 March 1931 permitted a khaki uniform similar to that of aviators but with long trousers and black instead of brown shoes. Originally, the wearing of the khaki uniform was restricted to officers serving in submarines or at submarine bases, but in 1939 it was extended to Chief Petty Officers. The lieutenant, qualified to command submarines, shows the stripes of his grade in black mohair on his sleeves with the star of the Line in black silk above them and the submarine device on his left breast. The device is a bronzed, gold-plated metal pin, showing the bow view of a submarine proceeding on the surface with the bow rudders rigged for diving. The submarine is flanked by horizontal dolphins, their heads resting on the upper edge of the rudders. The device is similar to the embroidered one worn by enlisted personnel qualified for submarine service.