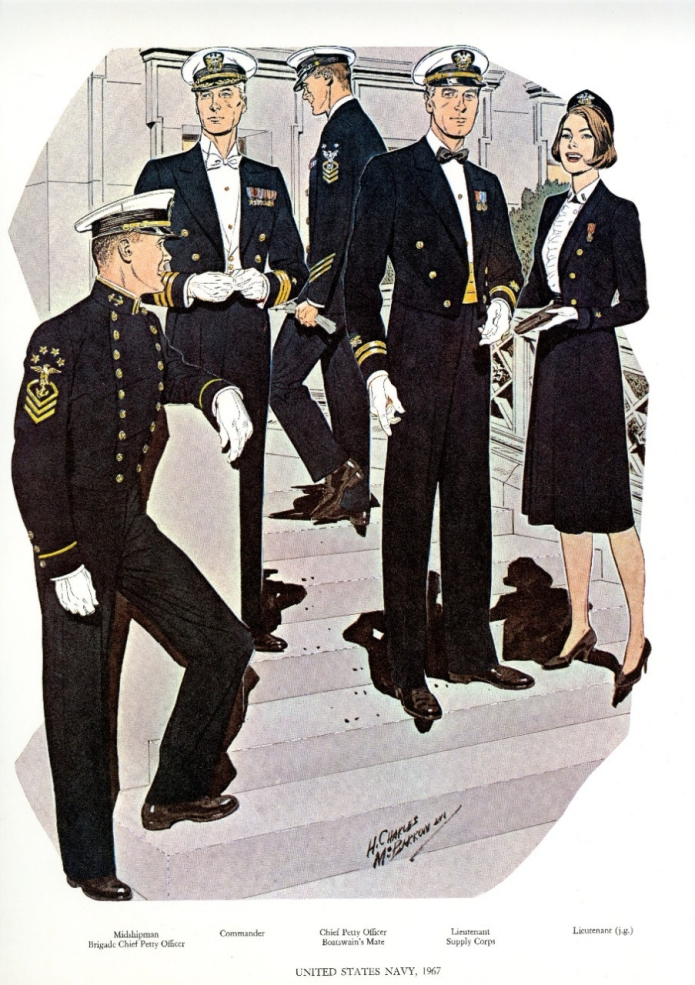 As could be expected, the 1959 Navy Uniform Regulations were modified almost as soon as they were released in printed form, as has been true of the uniform instructions since their inception. Advanced changes to the basic regulations today are issued as required by a Bureau of Naval Personnel “Notice” to all ships and stations; major revisions which include new and substitute pages and possibly a few pen and ink corrections are printed by the Government Printing Office (GPO). The first change was issued on 31 October 1961; Change 2 on 25 January 1963; Change 3 on 1 April 1964; and Change 4 on 16 September 1966.

Uniforms for midshipmen first appeared in the instructions issued by the Marine Committee of the Continental Congress in September 1776. The dress of midshipmen continued to appear in official Navy Department instructions until the 1883 order was released. This regulation covers the dress of “…Naval Cadets who have completed the four year’s course at the Naval Academy.…” When the Naval Academy was established in 1845, the Superintendent was authorized to issue uniform instructions for midshipmen, following in general the existing regulations for other officers. The instructions of 1886 and 1897 included uniforms only for cadets who had completed their education at the Academy and were now awaiting promotion to the grade of ensign. The 1905 and 1913 orders made provision for insignia and devices for midshipmen, leaving the day to day clothing regulations to the Superintendent. Article 18 of the 1922 regulations directed that the uniform for midshipmen, under orders issued by the Naval Academy, conform to the general terms of the official order covering other officers and men. This carried forward in the 1941 instruction, while the 1947 Navy Uniform Regulations referred only to “Aviation Midshipmen” and “Naval Reserve Officers’ Training Corps Midshipmen”, leaving the dress of midshipmen at the Academy to the Superintendent. The 1951 instruction, for the first time in years, included a section, Chapter 4, on “Naval Academy Midshipmen”. The 1959 order included the dress of midshipmen and authorized the Superintendent to prescribe such items of uniform and insignia, in addition to those covered by the official regulations, as might be required within the limits of the U.S. Naval Academy or at activities outside the Academy in which the Detachment of Midshipmen participated as a body.

Midshipmen wear the full dress blue uniform as “Evening Dress, Blue”. The short double-breasted blue jacket with a standing collar and nine gilt buttons on each breast is very similar to the undress jacket introduced in 1802. The nine button arrangement recalls the early dress of officers of the U.S. Navy and the gold lace trim on the top and front edges of the standing collar reverts to the 1852 uniform order. A plain gold anchor, a mark of midshipmen since 1830, is worn in a horizontal position on either side of the collar. Midshipmen Petty Officers wear a rating badge made up of an eagle, anchor, chevrons and stars on the upper right arm. The device to identify a Brigade Chief Petty Officer consists of a spread eagle perched on the stock of a foul anchor, three chevrons and two arcs, connecting the upper chevron ends, forming an arch and four stars above the device. The stars, eagle and anchor are embroidered in gold thread; the chevrons and arc are in gold lace. The stripe of yellow silk around the three buttoned cuffs indicates that the midshipman is of the First Class. The blue trousers are high waisted. The cap, worn with either blue or white covers, shows the cap device of midshipmen, a metal gold foul anchor. The chin strap is 3/8” wide gold lace secured with gilt buttons.

The Navy’s “Evening Dress” uniforms had their origin in 1866 when dress uniforms, discarded during the Civil War, were reinstated. The first uniform instruction after the war not only restored the full dress body coat, but for the first time authorized a uniform for “…Officers in their social intercourse within the United States, (upon occasions requiring them to appear in evening dress).…” The coat was to be cut in the prevailing style of civilian full dress coats with five gilt buttons on each breast. The coat was worn without sleeve lace, shoulder straps or epaulets, and collar devices were employed to indicate grade and specialty. An evening dress coat continued in the uniform instructions through those of 1941 when it was worn with sleeve lace. Under the 1947 order, both the full dress frock coat and the evening dress coat were omitted. The blue service uniform with a black bow tie was to be worn at social affairs when civilians would wear evening clothes. When the 1951 regulations were released, the evening dress uniform was restored and continued under the 1959 order. As in 1866, the blue evening dress coat is a military copy of the civilian full dress coat with three gilt Navy buttons on each side, two small buttons at the waistline in back and with sleeve lace. A stiff, plain bosomed or piqued shirt is worn with plain gold studs, a winged collar and square-ended white bow tie. The commander pictured shows the three stripes of half-inch gold lace of his grade with the gold star of the Line above them. Miniature medals are worn on the left lapel of the uniform. The blue trousers are high-waisted and the white vest of conventional pattern has three Navy buttons. In “Evening Dress, Blue” the standard white cap cover is worn. Under a directive of 18 December 1962, however, the blue cap cover remains as an optional item of uniform apparel.

The dinner dress uniform for chief petty officers consists of the service blue coat, of the same style as worn by commissioned officers, blue trousers and the standard cap with white cover. Instead of the stiff bosomed shirt and winged collar worn by officers in evening dress, chiefs wear a plain white shirt with either a semi-stiff or stiff collar, attached or detachable, and a black bow tie. The rating badge with the specialty mark of a boatswain, the long employed crossed anchors, shows the eagle and mark in silver and the three chevrons and arc in gold. The gold and silver device and the gold lace stripes rather than the usual scarlet stripes on the sleeve indicate that the chief has had not less than 12 years continuous honorable active duty and has qualified for successive awards of the Navy Good Conduct Medal. The chief is pictured wearing his campaign ribbons as required by the original 1959 regulations; change 3 directs the wearing of miniature medals.

The “Dinner Dress Blue Jacket” uniform worn by the lieutenant of the Supply Corps was approved by the Secretary of the Navy in November 1958 and is described in detail in the 1959 Uniform Regulations. The jacket is basically a blue version of the white mess jacket first introduced in 1901. The jacket is cut like the evening dress coat without the tails and with the same button arrangement on the breast. Instead of the shoulder marks used on the 1901 white mess jacket to indicate an officer’s status, grade and specialty are shown by means of gold lace sleeve stripes and an embroidered device. In this case, the two stripes of half-inch gold lace and the gold sprig of live-oak and three silver acorns indicate that the officer is a lieutenant of the Supply Corps. The stiff white shirt is worn with a stiff turn-down collar and black bow tie. The original 1959 instructions directed that a plain, black, pleated cummerbund be worn with the high-waisted blue trousers. Change 1 substituted a pleated gold cummerbund and also permitted the wearing of a soft front white dress shirt instead of the original stiff one. The current regulations also provide a white mess jacket with two navy buttons on each forepart to be worn with shoulder marks. This is the present day version of the 1901 jacket but now is worn with a black cummerbund instead of the original white vest.

An evening dress uniform was authorized for women officers in October 1948 and carried forward under the 1959 order. In the original 1959 order, the blue-black jacket was Eton styled, single-breasted with a rounded collar overlapping the half-peaked lapels. The collar/lapel cut was like that of the women’s blue service uniform. Grade and corps were shown on the sleeves in gold lace and embroidery. Under Change 2, the collar became the narrow shawl type and an inch wide strip of black velvet was employed to show officer status instead of the gold lace with the star of the Line or the appropriate corps device embroidered in gold above the black stripe. Grade and corps insignia are embroidered on the collar points of the white, short-sleeved, ruffled shirt. The necktie is crescent shaped of black velvet ribbon, graduating to each edge from an inch width in the center. The skirt for evening dress was floor length and circular topped by a dark blue cummerbund. Change 2 introduced dinner dress jackets for women officers. The evening dress jacket is worn with a skirt of conventional length. The head piece for both evening and dinner dress jacket is a crescent shaped tiara of black velvet, with an officer’s cap device embroidered in the center of the brim, which is turned up in front. Women officers of the grades of captain and commander have oak leaves and acorns embroidered on either side of the device. In 1963, women officers were given white evening dress and dinner dress jacket uniforms. The patterns are like the blues, but the white jackets and skirts are worn with a white cummerbund and white braid replaces the black velvet worn on the sleeves of the blue jackets.