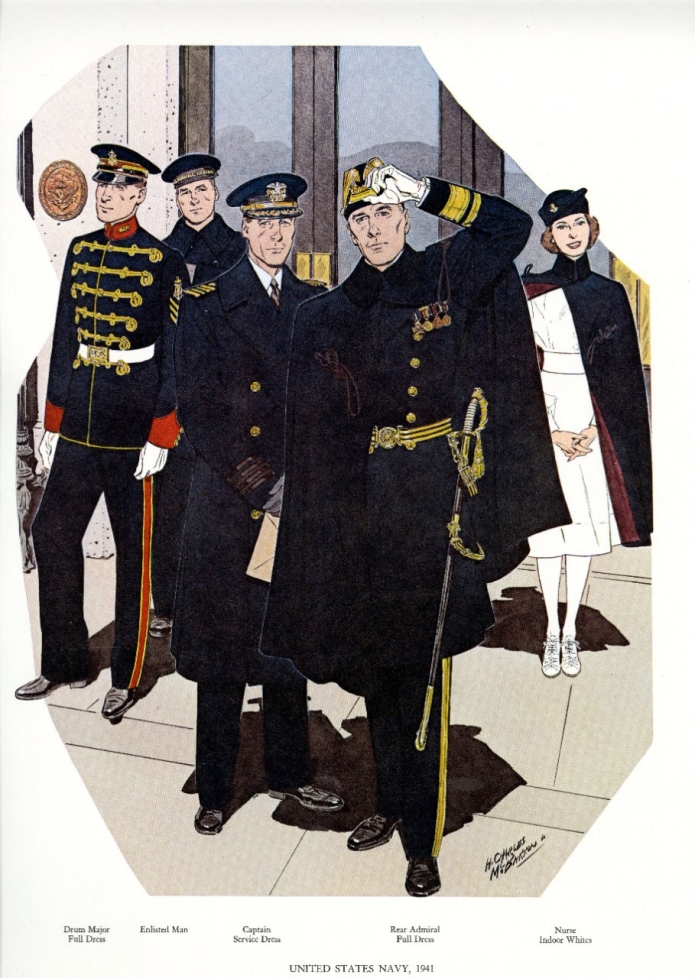 A new edition of the Navy Uniform Regulations, approved by Secretary Frank Knox, was issued on 31 May 1941. In general, the descriptions of the items of the uniform were those of the 1922 instruction for there had been little change in the style of civilian clothing, which usually has some bearing on the cut of the naval uniform. Actually, a new regulation is never truly “new” but is rather a composite of the earlier order and the many changes made since its initial issue.

The Drum Major is shown in the full dress, single-breasted, dark blue coat, trimmed with gold colored frogs and scarlet cuffs and collar which were first introduced in 1933. Although old ships’ logs indicate that bands had been established in the early days of the Navy, an official uniform for musicians did not appear in the Uniform Regulations until 1886. This uniform was blue, the coat trimmed with scarlet frogs and cloth. The 1897 bandsman’s uniform, shown in an earlier painting in this series, consisted of a scarlet tunic trimmed with yellow lace and white braid and skyblue trousers. Under the 1913 instructions, Navy bandsmen wore the full dress uniform of enlisted personnel of the Marine Corps with minor changes to indicate that they were part of a naval unit. The 1941 full dress uniform resembled the one first prescribed in 1886.

Although the musician’s 1941 blue coat was single-breasted, it had three rows of six Navy gilt buttons. The three buttons in each horizontal row were connected by gold colored silk or rayon cord. The scarlet collar showed the letters “USN” in gilt on either side and the pointed scarlet cuffs were closed with three small buttons. The front edge of the coat, the skirts and the back seams from the lower edge to the waistline, were piped with yellow flannel. Two gilt buttons showed on the waistline in back at the seams. The sleeve device for all musicians was a lyre surcharged on an anchor, all in gold colored embroidery. The device was worn on both sleeves between the elbow and shoulder. In full dress, the drum major showed three chevrons below the device, points down, with a gold star below the point. The white leather dress belt had a spread eagle on the waist plate. The dark blue trousers were trimmed with an inch wide stripe of scarlet cloth piped with yellow on the outer seams. The cap was stiff framed, standing and flaring throughout its circumference, with a dark blue cover. The scarlet cap band was trimmed with narrow yellow braid at top and bottom, with a half-inch wide band of yellow silk in the center. The yellow band was broken in front for the cap device—the lyre/anchor of the sleeves. The visor and chin strap were black. In other than full dress, bandsmen wore the blue or white uniforms of chief petty officers.

Until the issuance of the 1886 uniform instructions, the only prescribed outer clothing for enlisted personnel in cold weather was a vest and a short blue cloth overcoat or “pea jacket” introduced in 1866. The 1941 double-breasted, finger length pea jacket with its black buttons was very similar to that of 1886 except that the two lower pockets were omitted on the front. The pockets now were at the side seams. The man’s cap ribbon indicates that he is a member of the Naval Reserve on training duty. Instructions stated that men of the regular component show the words “U.S. Navy” on the cap ribbon, while men of the Reserve, on an inactive status or on training duty, would show “U.S. Naval Reserve.” The lettering on the black bands was in gold.

The captain’s overcoat is basically that of the 1922 order, which in turn was a modification of the World War I bridge coat. The 1913 outer coat had been worn completely buttoned, using black buttons. Gilt buttons were first permitted in November 1919 when the style of the overcoat was modified to bring it in closer agreement with the newly introduced double-breasted sack service coat. The first mention of an overcoat for officers appeared in the 1841 uniform instructions. In 1941, as in 1913, rank was shown on the sleeves with black braid with shoulder marks indicating both rank and corps. The white shirt shown is a modification of the 1913 order, for now white shirts with attached semi-stiff collars could be worn instead of the detachable stiff collars of the earlier orders. The cap with a blue cover, indicates “Service Dress, Blue A.” The gold embroidery on the cap bill is that of a captain or commander.

The frock coat worn by the rear admiral in full dress is the 20th century version of the coat introduced in 1830 for undress. The same coat later was used for dress. When the special full dress coat, cut to the waist in front and with tails, was suspended in 1917 for the duration of hostilities, it was never reinstated. Under the 1922 order, the frock coat was to be used for full dress, dress and undress, and this carried over into the 1941 instructions. The double-breasted coat had five Navy gilt buttons on each side, worn with only the lower four buttoned. Rank was indicated on the sleeves with gold lace, in this case a two-inch wide stripe with a half-inch wide stripe above it. The star of the Line, or the device of a Navy staff corps showed above the lace. In full dress, epaulets were worn. Those of a rear admiral, Line, showed two stars on the pad and a gold foul anchor on the strap. The full dress belt of flag officers was of dark navy-blue webbing, backed with leather, with three one-quarter inch wide gold stripes woven into the webbing. Belts for captains and commanders showed seven stripes of one-sixteenth inch wide gold and for junior officers, five stripes. The sword slings for all commissioned officers were trimmed with three stripes of gold weaving, three-eighths of an inch wide. The full dress trousers for all other commissioned officers, except chief warrant officers, showed gold lace on the outer seams. This practice was initiated in 1852. The width of the lace varies with grade—an inch and three quarters wide for flag officers; an inch and a half for captains and commanders; and one inch for all others. Although a cloak had long been part of an officer’s wardrobe, it did not appear in Navy Uniform Regulations until 1852. The cloak was to be worn “…on boats, or when epaulets are worn, if rendered necessary by cold or wet weather.” The 1941 boat cloak was dark blue, lined with black silk or a similar material, with a black velvet collar. The collar was secured with hooks and eyes and the cloak was secured over the breast by black silk frogs. The trim of the cocked hat indicated rank. Flag officers had inch and a half wide lace on the fans and a loop of the same width lace over the black cockade. The fans of all other officers were trimmed with black silk and the cockade loop was of the width of the trouser lace.

Although uniforms for members of the Navy Nurse Corps had been prescribed by competent authority prior to 1941, they did not appear in an official Navy Uniform Regulation until that edition. Chapter XVII made provision for an indoor or ward uniform and for protective clothing for wear out of doors but did not include a formal street dress. The indoor white uniform was a skirt attached to a bodice at the waistline with a detachable white belt. The corps device was worn on either side of the tips of the opened collar. The device was the earlier one, a gold plated brass oak leaf with an acorn superimposed on a gold foul anchor. Over the device, the letters “N.N.C.” in bright silver were placed. The nurse’s indoor white cap indicated her relative position in the Corps. The black velvet band of the Superintendent showed two stripes of quarter inch wide gold lace with an eighth inch stripe between them; Assistant Superintendents showed two quarter inch stripes; Principal Chief Nurses, one quarter inch stripe and one an eighth of an inch wide; Chief Nurses, one quarter inch stripe; and nurses who had completed their probationary period, an eighth inch wide stripe. Nurses still on probation showed no lace on the black velvet. The outdoor hat was of dark blue fur felt worn with a metal pin on device on the right side of center. The blue cape was lined with maroon cloth and had a black velvet collar. The collar was closed with hooks and eyes and the cape fastened over the breast with black frogs. Under the 1941 instruction, only white shoes and stockings were authorized for nurses. In March 1942, shortly after the United States entered World War II, complete outdoor uniforms, both blue and white, were prescribed for the Nurse Corps.