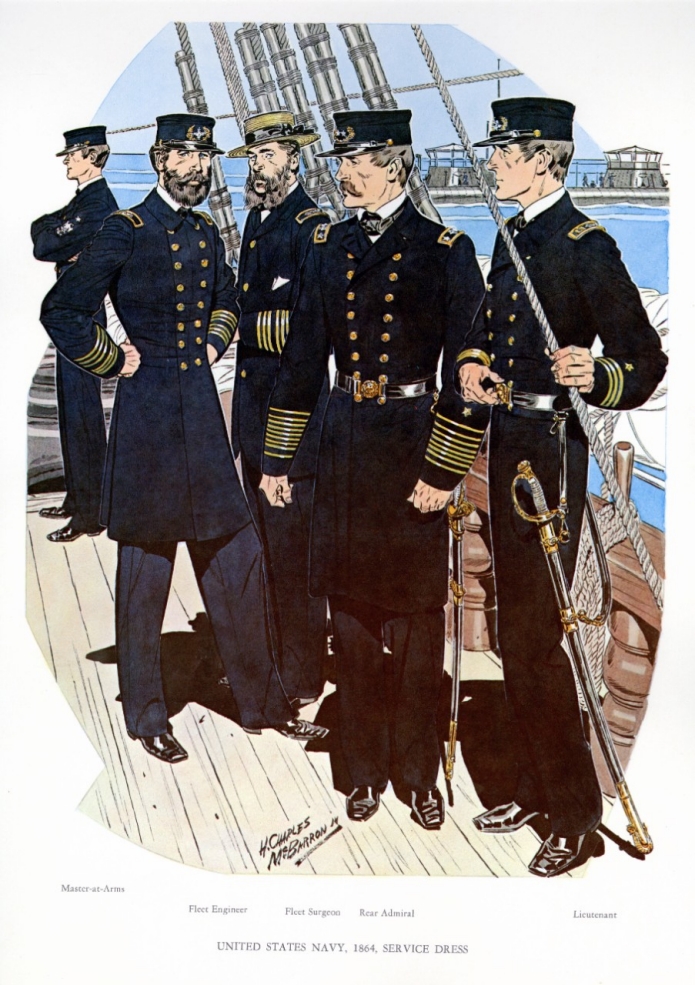 The Regulations for the Uniform of the Navy of the United States, approved by Secretary of the Navy Gideon Welles on 28 January 1864, finally brought all the changes to the 1852 instruction up to date. The instruction of 1862 was but a modification of the 1852 order, not a new regulation. Changes had taken place after the modifications of 1862, so a new complete order was needed to provide a better understanding of what uniforms, insignia and rank designations were to be worn. The Navy had expanded greatly and many of the officers and men were the volunteers so badly needed to supplement the comparatively small regular Navy of 1861 when the war began. Another reason for the issuance of a new uniform order was the granting of relative rank to certain commissioned civil officers, who previously had no form of rank, and the modification of the relative rank of medical officers, paymasters (pursers until 1860) and engineers.

The relative rank granted those officers not previously coordinated with their Line counterparts was established as follows:

Officers, while detailed as chief of a Bureau, were to rank with commodores.

A major modification of the uniform instructions, following the extensive 1862 change, occurred in May 1863. The combinations of three-quarter and quarter-inch lace were replaced by strips of quarter-inch lace, from eight for a rear admiral to one for an ensign. A five pointed star to be worn above the lace was introduced and has remained the device of the Line ever since. Staff officers of the same relative rank as their Line counterparts wore the lace indicated, but without the star.

On 11 November 1863 a uniform change was issued, prompted chiefly by the modification of the relative rank of surgeons, paymasters and engineers, and by the granting of relative rank on 13 March 1863 to chaplains, professors, naval constructors and secretaries. The corps devices for the older groups of staff officers were modified slightly and new insignia provided for the officers who had just been given status with the Line. Medical officers wore the device on the cap only, within the standard wreath of oak leaves and acorns, while other groups had the device on their shoulder straps as well as on the cap. The same order also modified the cap insignia of line officers, two silver stars for rear admirals, and a vertical foul anchor for all other commissioned officers.

When new uniform regulations were issued on 28 January 1864, the previous changes were reflected, and some new features introduced. Although a full dress uniform was included, it was not to be worn during the war, so cocked hats and epaulets remained in storage. The shoulder straps were modified and all combatant officers used the silver foul anchor, introduced as a cap insignia of officers from commodore to ensign, as a device in the center of the strap. Staff officers except for medical officers, who had nothing but rank devices on their shoulder straps, used the corps insignia in lieu of the anchor. The shoulder straps of the Line appear in the 1864 instruction.

For service dress, the frock coat was worn with shoulder straps and cap as indicated by the Rear Admiral and Fleet Engineer. A short jacket could be worn in service dress aboard ship except for more formal occasions such as muster or as “Officer of the Deck”. This comfortable coat is worn by the lieutenant. The Fleet Surgeon is shown in a “sack” coat, not included in the official instructions of 1864 but seen in many photographs of naval personnel. Although the sack coat would not be officially authorized until January 1865, as had happened, earlier, coats were “adopted” and later confirmed by official orders. Straw hats had long been permitted in warm climates and the dimensions had been spelled out in detail. Civil War photographs show many varieties of straw hats from the regulation type shown, to the floppy, wide-brimmed planter type.

Under the 1864 order, certain petty officers were permitted to wear a double-breasted blue jacket, with two rows of medium sized buttons on the breast. The sleeves were slashed with four small buttons in the openings. The master-at-arms, the leading petty officer of the period, is shown in this jacket, with a plain blue cap. As a further indication of petty officer status, the master-at-arms wore the device introduced in 1841, the anchor, eagle and star on his left sleeve.

The ship in the background is one of the ironclads built during the Civil War, an outgrowth of Ericsson’s Monitor with the same low freeboard but with two revolving turrets.