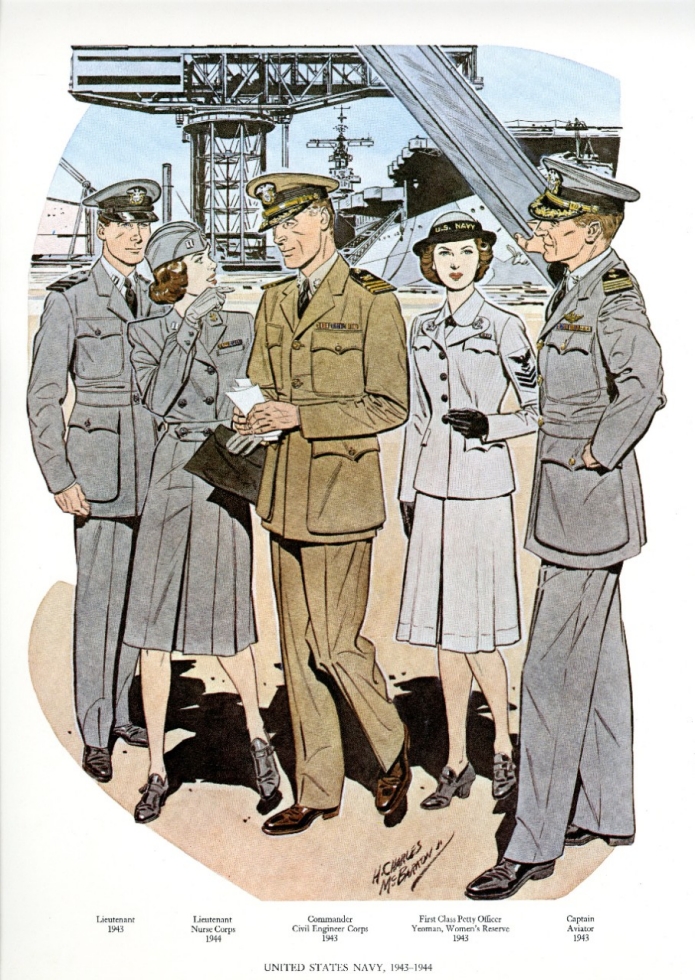 Under the 1922 Regulations, a dungaree working uniform was provided for both officers and men but its use was very limited. Modifications in 1925 and 1931 provided a suitable working uniform for aviators and submariners. Later the order was expanded to permit officers on duty at air stations and submarine bases, other than those qualified as flyers or submariners, to wear greens or khakis. As tension grew prior to the entrance of the United States into World War II, the use of the khaki uniform was broadened to include officers performing duties for which the standard blue or white service uniforms were not suitable. An “AlNav” of 21 February 1941 authorized the wearing of the khaki uniform by all officers, at the discretion of their commanding officers. This change was a boon to all officers and especially to those of the Civil Engineer Corps who were engaged in a world-wide construction program. A message of 25 April 1941 directed that khakis be worn with gilt buttons and shoulder marks, doing away with the bronze buttons and black sleeve markings of the earlier orders. The 1941 Regulations carried forward the recent changes and also permitted officers to indicate their rank and corps on the khaki shirt collar tips. Line officers wore rank insignia on both sides, while staff officers indicated grade on the right and corps on the left side. The metal pin-on devices were 5/8th the size of the embroidered ones shown on the sleeves of the blue coats.

The creation of the WAVES (Women Accepted for Emergency Service) on 30 July 1942 required changes to provide uniforms for this latest addition to the personnel of the United States Navy. The first instructions for women’s uniforms, March 1943, provided blue and white service uniforms and a working dress. An “All Hands” letter of 16 April 1943 initiated a drastic change in the working uniform of both men and women. The letter advised that the khaki uniform would be replaced by one of slate gray with black-blue plastic buttons, flexible gray cloth shoulder marks with grade and corps devices in black. Tradition dies hard and the idea of the new uniform was not too well received! After years of “blue and gold” and a distinct liking for the rather new khakis, any change seemed unnecessary. While the change to grays at first affected male officers, in time it modified the dress of WAVES and Navy nurses.

The lieutenant is shown in the new gray uniform. The basis for the change in color can be found in a letter of 7 April 1943 from the Chief of the Bureau of Naval Personnel to the Secretary of the Navy, via the Commander in Chief and Chief of Naval Operations. Two reasons were given for the proposed change: first, to “conform to the simplicity and utility of officers’ uniforms in the Army and Marine Corps…” and second, “… to obtain a uniform more suitable for our present shipboard camouflage.…” The first reason is a bit difficult to understand for neither the Army nor Marines had gray uniforms. The second is a bit easier to understand. Admiral King in his endorsement, recommended approval “… to stabilize the ‘whole working uniform’ situation…” Secretary Knox approved the change on April 16th. An additional reason was the substitution of plastic and cloth for the metals so vitally needed in the war effort. The slate-gray coat was the same in pattern as the former khaki, except the two lower patch pockets were to be a bit smaller. The blue-black plastic buttons were of the same pattern as the gilt ones they were to replace. The flexible shoulder marks, similar in stiffness to those introduced in 1897, were to be of gray cloth with grade stripes and device in black embroidery. The gray shirt was to be worn with collar devices. The gray covered cap was to have a plain black visor for all grades and a black braid chin strap. Officially, shoes were to be black, but during the transition period, tan shoes could be worn. Until the gray uniform was in full production, khakis could be worn, and officers were advised that a study was being made to determine if khakis could be dyed gray. The latter project did not meet with success!

The nurse, member of whose corps had been granted relative rank in 1942, is shown in the slate-gray uniform authorized on 2 May 1944. It was a one-piece double-breasted dress with notched lapels and a rolling collar. On the right side of the collar is the indication of grade, in this case the two silver bars of a lieutenant. On the left collar tip is the metal miniature device of the Nurse Corps. The device had been modified by an order of 30 June 1944 which removed the silver letters “N.N.C.” leaving the gold spread oak leaf and acorn superimposed on a gold foul anchor. The gray uniform was to be worn with black shoes, beige stockings and gray gloves. The purse was black cordé without a handle. With the gray working uniform, either the standard, circular, visorless cap of the Corps with a commissioned officer’s device, authorized in May 1944, or a garrison cap could be worn. The gray garrison cap had a miniature cap device on the left side and the two silver bars of a lieutenant on the right.

The commander, Civil Engineer, is shown later in World War II wearing the khaki working uniform of January 1941. The blue covered shoulder marks show the three gold lace stripes of his grade with the device of the Civil Engineer Corps above them. The device consisted of two sprigs of live-oak in gold embroidery with a silver acorn at the stem of each sprig. The shape of the device was roughly that of a diamond. The cap visor shows the oak leaf and acorn embroidery of officers of the grade of captain or commander. Under the original 1941 instruction, rank and corps devices were not to be worn on the khaki shirt collar unless the coat was removed. In 1941, either black or brown shoes could be worn with khakis.

The First Class Petty Officer WAVE Yeoman, is wearing the gray and white working uniform prescribed by the Bureau of Naval Personnel in October 1943. The basic uniform was a gray cotton seersucker shirtwaist dress with a matching jacket. The dress had a short collar with rounded ends, the collar being worn over the jacket. The jacket had peaked lapels, but no collar. On the rounded end of the coat lapel is shown the device of the WAVES—a three bladed propeller on which a foul anchor was superimposed. The whole device was of a size to be inscribed in a circle an inch and a half in diameter. On the gray working uniform, the propeller was navy blue and the anchor the lighter shade called “Reserve” blue. The jacket was fastened with four blue-black plastic buttons. The rating badge consists of three chevrons, an eagle and the specialty mark, two crossed quills. All portions of the badge were in navy blue. The badge was worn on the left arm to indicate that the wearer is of other than the seaman’s branch of the Navy. The hat for enlisted women, except chief petty officers, had a brim of navy blue cotton or woolen cloth and was worn with blue, white or gray covers. The brim was turned up in the back, close to the body of the hat, and gradually sloped down to the front. The brim in front was not to be turned up. The dark navy blue cap ribbon was marked in gilt letters, “U.S. Navy.” The cap for officers and chiefs had the brim up on the sides and straight in front and back. Black shoes and beige stockings were prescribed for wear with grays.

A modification of the gray working uniform is shown in the dress of the Naval Aviator captain. Under the change which replaced the khakis with the grays, a transition period was allowed. During this time, either the standard blue shoulder marks or the new ones could be worn. Further, either gilt or blue-black plastic buttons were permitted. A message of 8 June 1943 directed that the gold embroidered visor caps could be worn on formal occasions only; another message of August 1943 made their wearing optional. The Secretary of the Navy on 7 March 1944 directed that gilt buttons could not be worn, only the plastic ones. It was difficult to keep abreast of the changes and modifications of the gray working dress! The captain is shown in the “optional” uniform—gilt buttons, standard blue shoulder marks with four gold lace stripes of his grade and the gold star of the Line; and a cap with an embroidered visor and gold lace chin strap. The cap cover is gray to match the uniform; the shoes, black. On either side of his collar is the insignia of his grade, the silver spread eagle. The gray uniform remained in the official uniform instructions until 1949. Prior to its abolishment, it could be worn either with gilt buttons and standard shoulder marks, or the plastic buttons and gray marks of the original order.