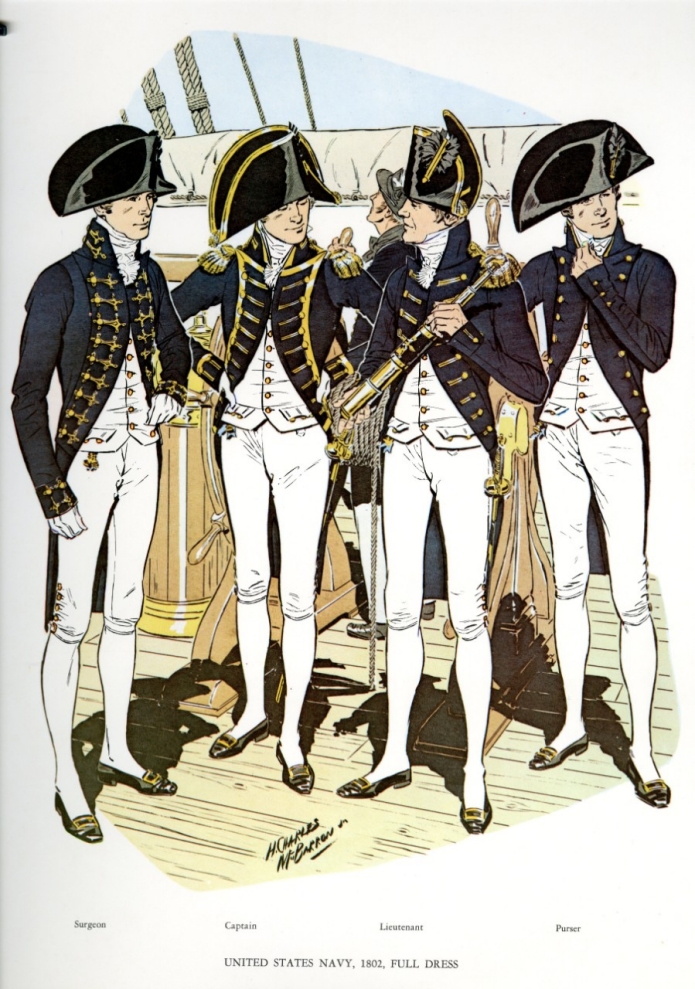 Although the Navy Department had been created by Congress in 1798, it was not until 1802 that a uniform order was issued over the signature of a Secretary of the Navy. On 27 August 1802, Robert Smith signed an instruction which set a pattern for the dress of the United States Navy which is still in effect today—“blue and gold.” Although the first blue uniform coat was worn with white vests and breeches, the current dark blue uniform with rank stripes and devices in gold, is a direct descendant of the coat of 1802. The 1802 uniform reflected the unofficial blue and white dress of the American Revolution.

All combatant officers wore coats of the same basic pattern, and rank was indicated by the presence or absence of gold lace, the number and location of gilt buttons. As under the previous order, only two officers were permitted to wear epaulets, two for a captain and one for a lieutenant. When second in command, a lieutenant’s epaulet was on the left shoulder, but when in command, the epaulet was shifted to the right. For full dress, a captain’s coat was trimmed with gold lace on the upper edge of the standing collar, down the edges of the lapels, around the pocket flaps, and down the skirts of the coat. While the order directed that a captain’s buttonholes be “worked with gold thread,” many contemporary paintings show lace instead of embroidery. A Navy button, described as “the foul anchor and American eagle, surrounded by fifteen stars” reflects the growth of the United States from the original thirteen. A button was worn on either side of the collar, with laced buttonholes. As in 1797, a captain had four buttons on the cuffs and at his coat and vest pocket flaps.

A lieutenant in full dress showed much less lace than his superior officer for only the buttonholes were “laced with such lace as is directed for the captain’s.” From the official wording and use of the word “lace,” it is understandable that portraits usually show lace instead of embroidery. As before, a lieutenant had three buttons on the cuffs, and now three at the pockets. A sailing master’s coat was like that of a lieutenant, but with slash sleeves with three small buttons in the openings and a single button on either side of the collar, with a slip of lace. Midshipmen were again identified by coats of a different cut from that of other combatant officers—a coat with short lapels, six buttons on each breast, and with a diamond formed of gold lace on either side of the collar. The jacket cuffs were slashed with three small buttons in the openings. The coat buttonholes were to be “…worked with gold thread….”

The style of uniforms worn by non-combatant officers was very much like that of the sea officers but with modifications which clearly indicated their status. A surgeon’s full dress coat was quite elaborately trimmed with gold lace frogs at the nine buttons on the lapels, the three at the pockets and on the cuffs and the two on either side of the collar. The surgeon’s mate’s coat was like that of a lieutenant with gold trim at the buttonholes and at the two buttons on the collar. The least elaborate uniform was that for pursers. Although the coat was cut like that of surgeons, the cuffs were slashed, with small buttons in the openings. The gold frogging was omitted, but pursers were directed to wear a band of gold lace not to exceed three-quarters of an inch wide around the top of the standing collar. As usual, no mention was made of a distinctive dress for chaplains.

For undress, the order stated that a captain’s coat would be without lace or embroidery; a lieutenant would omit the lace; and midshipmen would wear a short jacket with a standing collar. On either side of the collar was to be a button and a slip of lace. No mention was made of undress for sailing masters, surgeons or pursers. It must be assumed that they too omitted any gold lace or embroidery. Only captains, lieutenants and midshipmen could wear gold laced cocked hats in full dress, those of other officers being untrimmed. In undress, the round, or high hat of the period was also worn and continued to be an article of attire for some years to come.

The order did not specify a uniform for the forward warrant officers—boatswains, gunners, carpenters and sailmakers—but it is safe to assume that these warrant officers wore a blue jacket and vest, long trousers, topped off by a round hat. Although there was no provision for a standard dress for enlisted personnel, the provision of clothing under contract did make for uniformity. “Internal Rules and Regulations for U.S. Frigate Constitution, 1803—1804,” issued by Captain Edward Preble, Commodore of the Mediterranean Squadron, directed every seaman to have in his possession two blue jackets, waistcoats, pairs of trousers, both blue and white, black neckerchiefs and either a hat, or a hat and cap. For warm weather, each man was to possess a white jacket and vest. This is the clothing of seamen of the earlier periods and would continue to be so for years to come with slight changes in style.