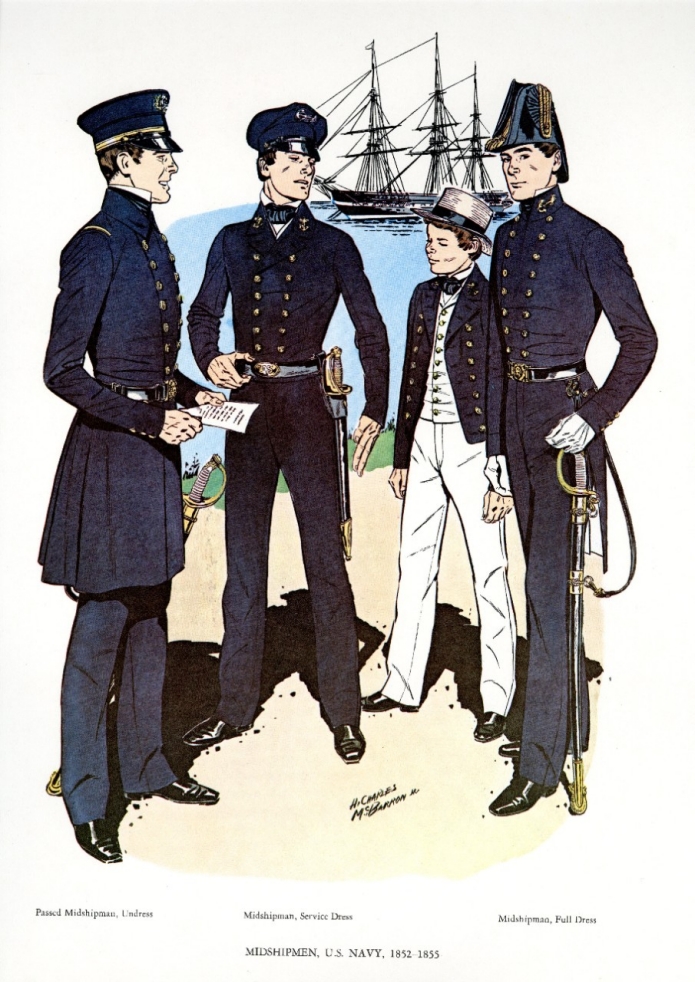 The midshipmen shown in this illustration are dressed in the uniforms as prescribed by the Regulations of 1852 with some modifications as ordered by the newly created Naval Academy. Prior to the establishment of the school at Annapolis in 1843, the young men who would be the future officers of the United States Navy had been educated in a rather haphazard manner. Since the Continental Navy was authorized in 1776, provision had been made for the young men who would in time command the ships of the Navy, but no real provision would be made for their education for many years. With the creation of the Federal Navy in 1797, the rank of midshipman was approved, and young men and, in some cases, mere boys were appointed as warrant officers. Many midshipmen who served in the early Navy had little formal education and, in most cases, no experience at sea or aboard ships. Basically they were supposed to learn their profession by observing their senior officers and doing such duties as might be assigned to them.

The need for educational opportunities was evident and as a stop-gap measure chaplains, when they were available, were supposed to do what teaching their other duties and the shipboard duties of the midshipmen would permit. To provide some small measure of assistance, Congress in 1813 established the rating of “schoolmaster,” but the rate of pay of $25 per month did not attract qualified teachers. In March 1835 the position of Professor of Mathematics was created with the status of a civil officer. With a better rate of pay and a quasi-officer status originally, some good instructors were secured, but the training program, mainly aboard ship, was not adequate for the Navy’s needs.

To supplement shipboard training, a school had been established in 1802 aboard the Frigate Congress, then in ordinary, or in today’s parlance, mothballs, at the Washington Navy Yard. Any midshipmen who had the desire for a somewhat formal education and could be spared from other duties availed themselves of the meager facilities. Three such schools were in operation in 1833 at Boston, New York, and Norfolk. The first truly Naval School was opened in Philadelphia in 1838 at the Naval Asylum, but education for midshipmen was basically still aboard ship at sea when duties permitted attending school. The problem was not solved, so Secretary of the Navy, George Bancroft, historian and man of letters, took matters into his own hands. In 1845, the unused Army facility at Fort Severn, Annapolis, Maryland, was transferred to the Navy with the approval of President James K. Polk. The Naval School was opened in makeshift quarters on 10 October 1845, with Commander Franklin Buchanan as Superintendent. As a staff, Lieutenant John H. Ward was to act as the executive officer and also instruct in gunnery and steam engineering. A Navy surgeon, John A. Lockwood, was instructor in chemistry, Chaplain George Jones taught English, while Passed Midshipman S. Marcy taught mathematics. Three Professors completed the staff, Henry Lockwood in natural philosophy; Arsene N. Girault in French and William Chauvenet in mathematics and navigation. It was a small staff but the beginning of a proper educational system for Naval officers. Congress gave official recognition to the Navy’s school when $28,200 was appropriated for repairs in 1847, and again in 1850 when the name was changed to the Naval Academy.

The early classes at the Naval Academy were made up of midshipmen, some of whom had served at sea or attended the so-called schools ashore and new appointees. In 1850 a new code of regulations was placed in effect and new appointees reported to the Academy as “acting midshipmen” to be attached to the Academy for two years and after this first term to go to sea for two and a half years to become a warranted midshipmen and then attend classes an additional two years. The 1852 Uniform Regulations provided dress and undress uniforms for midshipmen and passed midshipmen, while the Academy established a uniform for acting midshipmen. The various uniforms are shown in the illustration.

Both the foreground figures are shown in the official 1852 uniforms. The Passed Midshipman is wearing the undress frock coat of the senior officers of the Navy but the sleeves of his coat are plain with only the three small buttons in the cuff opening. In 1852 a captain in undress would have three strips of three-quarter inch wide lace on the sleeves of his coat; a commander, two strips, a lieutenant, one, and a master, three medium buttons around the cuff. Commissioned officers in undress could wear either the epaulets or shoulder straps of their rank, while passed midshipmen wore only a strap of gold lace one-half inch wide and four inches long in lieu of the more decorative straps. Midshipmen, not passed, had no shoulder ornaments. As other officers, passed midshipmen wore the blue cap with the same cap device as lieutenants and masters, a wreath of gold oak and olive branches with a silver foul anchor in the center. Under the 1852 order, masters and above had a band of gold lace around the cap but none was specified for midshipmen. Under a uniform change of 11 February 1853, all midshipmen could wear lace bands.

In the right foreground, the midshipman is shown in full dress. The coat is a direct descendant of the one introduced in 1813; tight fitting, with tails and a standing collar. The sleeve lace of the senior officers and the buttons of a master were omitted from midshipmen’s coats, and the amount of lace on the collar was reduced to a minimum, an inch wide band around the top with no lace at the bottom for a passed midshipman, and none for a midshipman. In lieu of collar lace, a midshipman had a foul anchor embroidered in gold thread on either side of the collar. The 1852 order had introduced the use of gold lace along the outer seams of the full dress trousers, the width of the stripe diminishing as the rank went down. For a passed midshipman, instead of flat lace, a gold cord a quarter inch in diameter was used and midshipmen had no seam decoration. The cocked hat was like that of all officers entitled to wear them below the rank of commander, a loop of four gold bullions over the cockade. Captains and commanders had loops of six bullions, the center two twisted.

The midshipmen in the center background are shown in the Academy’s variation of the official 1852 uniform instruction. The 1852 order provided that jackets could be worn by all officers when at sea except at general muster or in charge of the Deck. The double-breasted jackets had the same number of buttons as the full dress or frock coats, and officers entitled to wear epaulets wore the shoulder straps of their rank. A jacket was certainly a more suitable coat for young active midshipmen at an educational institution than the cumbersome frock or full dress coats. The standard undress cap was worn as shown on the left center figure without the grommet so that the cap had a nautical flair. As a substitute for the gold cap band of the 1852 order for warranted midshipmen, the cap was worn with a silver foul anchor. The Academy cap device was introduced at Annapolis in 1855, as was the practice of displaying a gold foul anchor on either side of the rolling collar. Acting midshipmen were not permitted to carry the sword of the 1852 order but instead carried the Model 1842 cutlass as a side arm. The plebe or first year man, right center, is wearing the white trousers permitted in warm weather under the official regulations and the tropical straw hat, a very suitable dress for the very hot weather which sometimes reaches Annapolis.

In the background is shown U.S.S. Constellation which for many years served as school ship at the Academy. The original system of sending acting midshipmen to sea after two years at the Academy was changed in late 1851, and summer cruises provided the sea experience deemed necessary for the education of young naval officers.