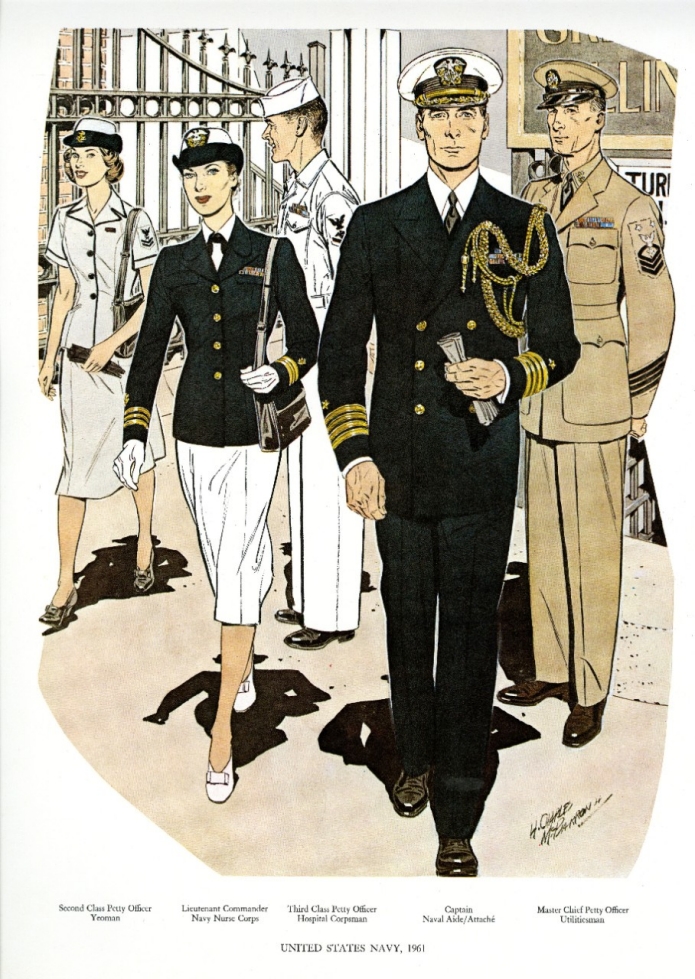 A new, or more properly, up-to-date, uniform instruction was approved on 6 April 1959 to incorporate the many changes to the former 1951 order. In format, the 1959 regulation followed the earlier one, but instead of including illustrations of insignia, devices and uniforms in the pertinent sections, all illustrative material was placed in appendixes. To illustrate the various uniforms in Appendix A, photographs of dressed male and female manikins were used. As a result, in many cases the details of the cut or devices are not clear. The insignia, accessories and awards in Appendix B are indicated by means of line drawings and photographs. In effect, the method of illustrating the instructions reverted to the style employed through the 1941 Regulations.

Under the 1951 Regulations, only two service uniforms were provided for women. The 1959 edition added a light blue uniform for both officers and enlisted personnel. The light blue and white striped, corded dacron/cotton uniform was to be used as a counterpart of the khaki service uniform worn by male officers and chief petty officers. The short sleeved jacket was worn open at the neck with the collar and lapels turned back. No shirt was worn with this jacket which was trimmed with navy blue piping and closed with four blue Navy eagle buttons. Women officers wore pin-on insignia of grade and/or corps on the collar points; enlisted women wore marks or rating badges on the sleeves. The device of the Second Class Petty Officer Yeoman is, as it had been for many years, two chevrons, a spread eagle and the two crossed quills as the specialty mark. On the light blue uniform, the rating badge was embroidered entirely in dark blue and set just ahead of the center line of the left sleeve. The skirt, of the same material as the jacket, according to the regulation, was to come to the middle of the calf of the wearer’s leg. The shoes were black and the stockings the usual beige. The cap is very similar to that introduced for wear by officers of the newly created WAVES in 1943 and was worn with a cover to match the jacket. The cap device for enlisted women other than chief petty officers, was a gold colored foul anchor superimposed on a silver three-bladed propeller. This device was originally used as a corps device by the WAVES. The same device with the anchor in white silk and the propeller in light blue was worn by enlisted women, except chief petty officers, on the navy blue service uniform on the rounded ends of the collar. A plain black handbag of leather or synthetic material was carried when the blue uniforms were worn. A similar white bag was carried when the white uniform was worn. The bags had detachable shoulder straps so they could be slung from the shoulder or carried in the hand.

The blue service coat, prescribed for all women of the United States Navy, both officers and enlisted, is single-breasted, straight backed, easy fitting in front, with a rounded collar which overlaps the half-peaked lapels. The instructions state that the blue coats for officers and chief petty officers are to be of a dark blue cloth, and those for enlisted women, other than chiefs, navy blue. The lieutenant commander nurse is shown in “Service Dress, Blue C” of the 1959 order, now known as “Service Dress, Blue, modified”. The blue coat is worn with a white skirt, hat with white cover, white dress shoes, beige stockings and a black handbag. Grade is indicated in the same way as for male officers, by gold lace on the sleeves, with a star of the Line or a corps device above the lace. In the case of the officer pictured, the cuffs show two half inch wide stripes of gold lace with a quarter-inch stripe between them, and the device is that of the Nurse Corps, a gold spread oak leaf. The white summer coat is similar in cut to the blue one shown, but instead of gold sleeve lace, white braid is used with the device embroidered in yellow. The hat is the basic one for all Navy women. Officers display the standard cap device, two crossed gold foul anchors, surmounted by a silver shield with a silver spread eagle above. The white shirt has short sleeves and is worn with a black tie, tied with a square knot.

The third class petty officer of the Hospital Corps is depicted in the long, white tropical uniform. This modification of the earlier white tropical uniform of shorts and undershirt to be worn by enlisted personnel, provides a practical dress for work in warm areas where shorts would not be suitable. The trousers are those specified for use with the white service uniform. The short sleeved shirt has an open notched collar, forming a Vee neck. There are pockets on either side of the shirt and the rating badge is worn on the left sleeve so placed that the rear edge coincides with the center line of the sleeve. Only chief petty officers have their rating badges centered on the sleeve. The rating badge of the Third Class Petty Officer Hospital Corpsman, is made up of a single chevron, a spread eagle and the caduceus is employed as the specialty mark. All embroidery is in blue on the white shirt. The use of the caduceus as the specialty mark for hospital corpsmen is a reversion to the device used to identify apothecaries under the 1897 Uniform Regulations. When the Hospital Corps was established in 1898, the red Geneva Cross was adopted as the corps device for all rated men. The use of the caduceus for members of the Hospital Corps began with the 1951 Regulations. A white belt with a brass buckle is used with white trousers and black shoes are worn with all uniforms by enlisted men, except chief petty officers. Male enlisted personnel except chief petty officers, wear a white hat with all uniforms. Until 1 April 1963, a blue flat hat had been authorized for wear with Service Dress, Blue A, Full Dress, Blue A, and Working, Undress, Blue A uniforms.

The blue service uniform for male officers in 1961 was basically the same as the one introduced at the end of World War I, except for modifications in cut to stay in reasonable conformity with civilian styling. The officer shown in Service Dress, Blue B, blue coat, blue trousers and a white cap cover, displays the grade of captain on his sleeves, four stripes of half-inch gold lace with the gold star of the Line above them. The four aiguillette loops on the left shoulder indicate he is serving either as naval attaché or as a naval aide. Normally aiguillettes are not worn outside of the area of accreditation, but can be worn at the request of the officer to whom assigned. Dress aiguillettes, worn with the blue service uniform, consist of four loops of aiguillette cord, two of which are covered with gold or gilt thread and dark blue silk by means of braiding, and two loops of unplaited yellow cord. On the plaited cords, the dark blue is so inserted that it forms spiral bands approximately 3/16ths of an inch wide, at intervals of 7/16ths of an inch. The blue and gold cords end with gilt metal pencils on which silver anchors have been mounted. The only naval officers to wear aiguillettes on the right shoulder are the Aide to the President and Aides to the White House. The aiguillettes of these officers are entirely gold, the blue plaiting being omitted.

The Master Chief Petty Officer, Utilitiesman, is shown in the khaki service uniform. Of particular interest is the standard rating badge of a chief petty officer, but the addition of silver stars above the eagle’s wings. Pay grades E-8 for Senior Chief Petty Officer and E-9 for Master Chief Petty Officers were established by Congress in 1958 by an amendment to the Career Compensation Act of 1949 to provide for the recognition and promotion of outstanding chiefs. The 1959 Uniform Regulations describe the special devices to be employed to identify the newly created ratings for superior petty officers. Their rating badges were to be identical with those long used for chief petty officers with the addition of stars. For a master chief, two stars are used, one above each wing of the eagle; a senior chief shows one star above the eagle’s head. Under the 1959 order, all chief petty officers were to wear metal insignia, miniature cap devices, on the tips of the collars of khaki, blue flannel and tropical white shirts. A change of 31 October 1959, directed that a master chief show a silver star on either side of the ring of the gold foul anchor and a senior chief have a single star directly above the anchor ring. The device, like that of the cap, had the letters “USN” in silver on the anchor. On service dress khakis, the three chevrons and arc are in blue and the eagle, specialty mark and stars in silver. When a Chief Petty Officer Construction Electrician is promoted to Master Chief, he is designated Utilitiesman although he retains the device for a construction electrician, namely a telephone pole with an electric spark superimposed. The chief shows four navy blue stripes, set at an angle on the left sleeve cuff, indicating sixteen years service. The cap is covered with khaki to match the uniform and is identical with the cap worn by commissioned officers except that the chin strap is black patent leather instead of gold lace. The cap device, the foul anchor with USN, is basically that introduced in 1897 as a means of identifying the then newly established rating of Chief Petty Officer.