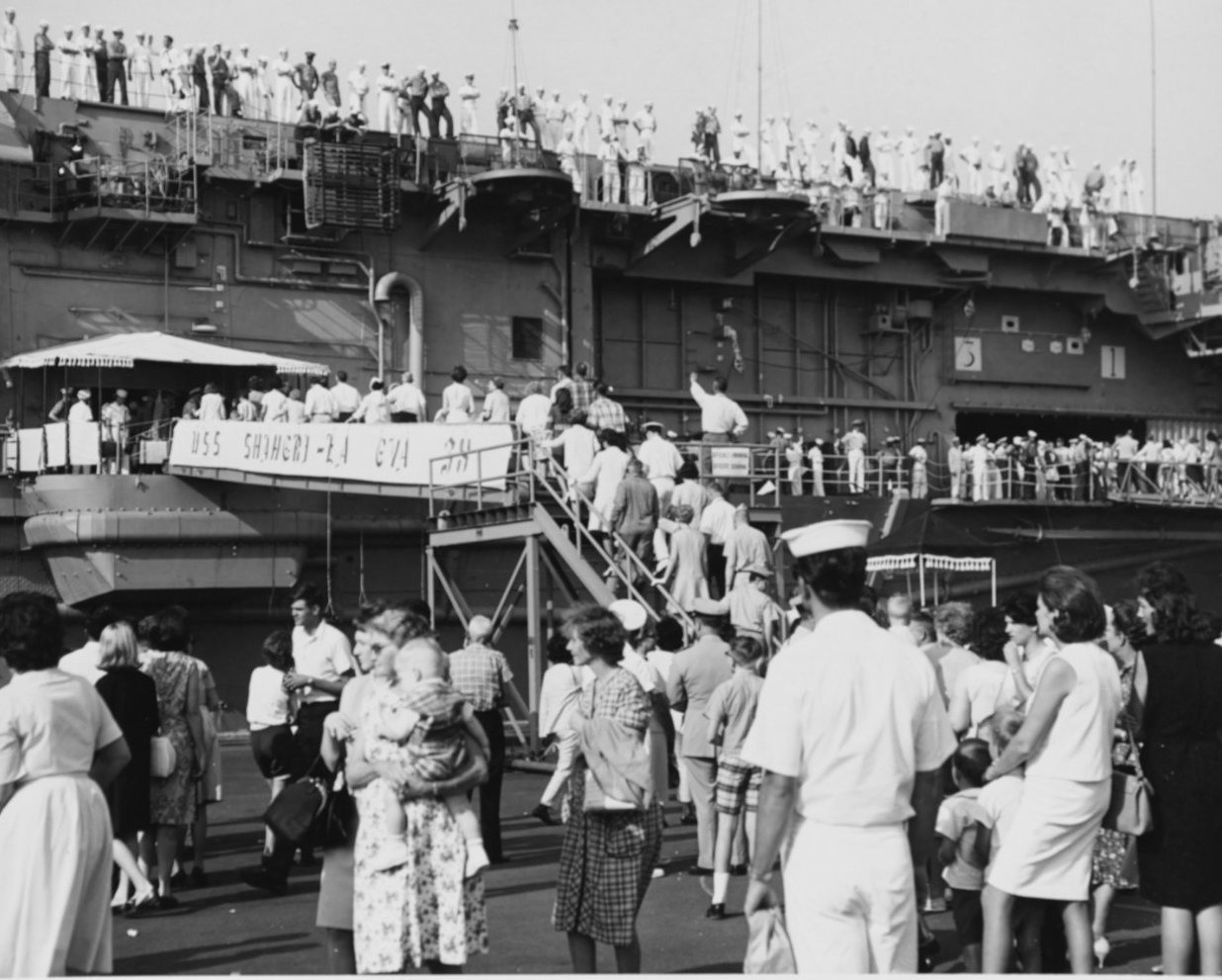 May 1967: Friends and relatives crowd the gangways of USS Shangri-La (CVA-38) to welcome home their loved ones as the carrier returns to Mayport, Florida, following an eight-month deployment with Sixth Fleet in the Mediterranean. About 1,600 people were waiting on the pier to greet the ship (NH 97591).

In April 1939, the Navy Department initiated plans for a facility in the Duval County, Florida, area, which included a site for the development of an aircraft carrier basin. In December of that year, on the basis of a report made by Commander Carl Cotter, officer-in-charge of construction, Ribault Bay was selected as the location for such a basin. The basin was dredged to 29 feet and used by patrol craft, target and rescue boats and escort carriers during World War II. At war’s end, funding had been appropriated to build a carrier pier on the north side of the basin. This appropriation, with many others, was cancelled and no improvements were made. The station was commissioned as a U.S. Naval Section Base in December 1942. On 1 April 1944, the air facility at Mayport was commissioned a Naval Auxiliary Air Station (NAAS). At the same time, the Sea Frontier Base was maintained in the bay area. The next year, the Naval Auxiliary Air Station took over the entire site including the pier and docking facilities. During World War II, the U.S. Naval Section Base and Naval Auxiliary Air Station provided vital support to the country’s war effort in terms of personnel and logistics. Following the war, both the Naval Section Base and NAAS were decommissioned and placed in a caretaker status. The Coast Guard took over the base and operated a small basic training facility there for several years, but the service vacated Mayport in late 1947 due to budget cuts.

Mayport was reactivated again in June 1948 as a Naval Outlying Landing Field under the cognizance of the Commanding Officer, Naval Air Station, Jacksonville. Three years later, the land area of Navy Mayport facilities was increased to 1,680 acres and work began on extending the runway. Through the late 1940s and mid-1950s, the Mayport base continued to grow to accommodate new classes of ships and extended runways for the increasing air traffic.

In 1953, the U.S. Corps of Engineers re-dredged the basin to 40 plus two feet so Midway-class carriers could enter the basin. By 1955, a master jet runway 8,000 feet long and a 4,200-foot-long runway were in use at the station and many new structures including an operations building had been built at Mayport. On 1 July 1955, in appropriate ceremonies, Mayport became once again a Naval Auxiliary Air Station. The following year the aircraft carrier USS Franklin D. Roosevelt (CVA-42) arrived in Mayport, its new homeport, from Bremerton, Washington. This was also the first time Navy families moved to Mayport with their ship. For the remainder of the twentieth century, Naval Station Mayport continued to expand to accommodate more ships, Sailors and their families, and improvements in base facilities. As a reflection of growth, Mayport Naval Air Facility was re-designated as a naval air station in 1988.

The 21st century finds Naval Station Mayport thriving with activity and well positioned to serve as a vehicle for mission readiness. While the face of the base is familiar to many who have watched it grow for years, the infrastructure has evolved with, and anticipated, developments in technology, service, and family needs. The Navy at Mayport covers 3,409 acres and the base is the third largest naval facility in the continental United States. As a major surface and air warfare organization, Mayport remains dedicated to providing “The Finest Service to the Finest Fleet.”