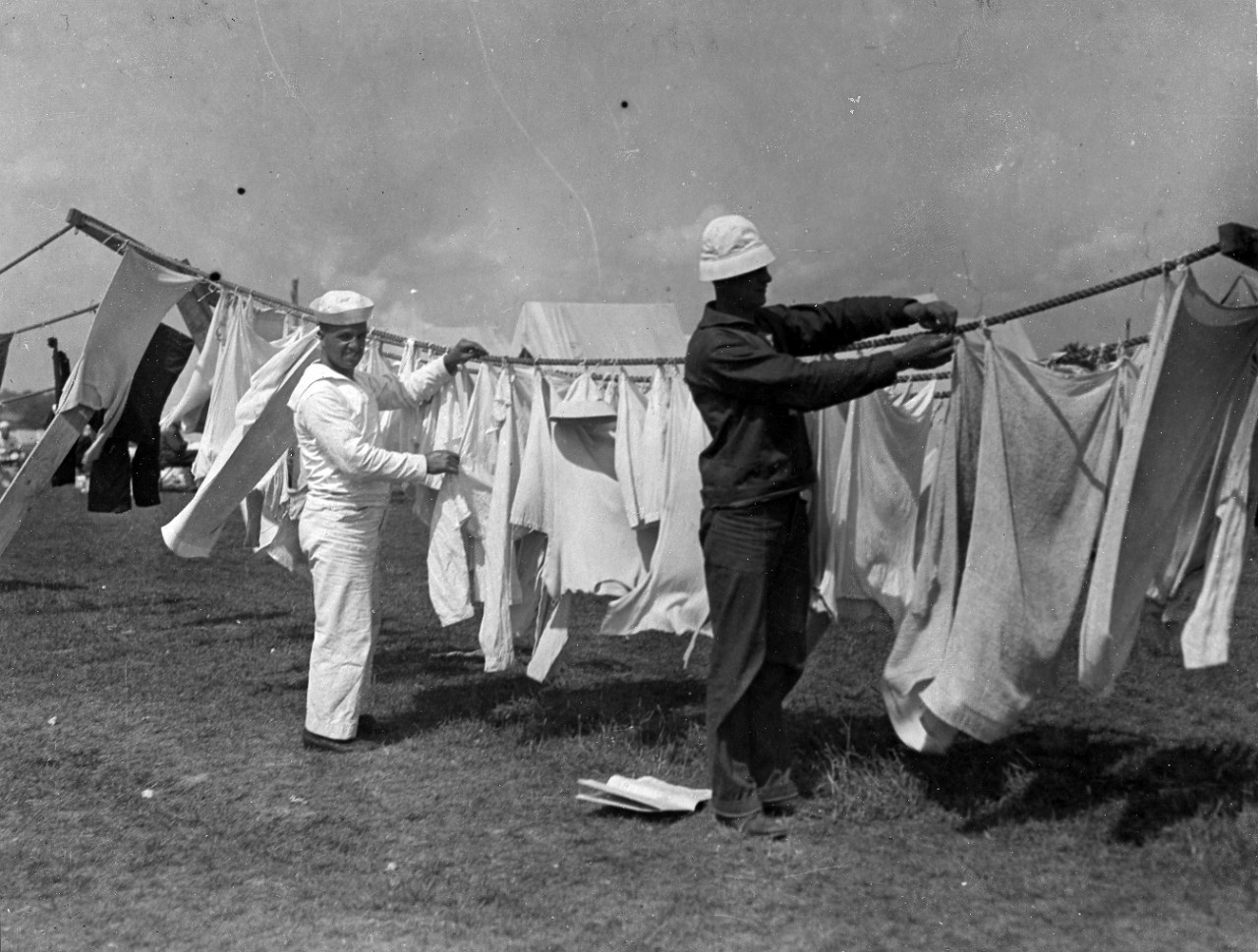 Sailors doing their own laundry at Great Lakes Naval Station, Illinois, circa 1919 (NH 2884).

The building of Great Lakes didn't happen overnight. In the early 20th century, it was a novel idea to train enlisted sailors before they got to the fleet. The Training Station at Newport, Rhode Island, only got started in 1881. Before that, enlisted sailors joined the Navy and went directly to a ship. All their training took place underway. Not long after the Spanish-American war, in 1902, U.S. Navy leaders noticed a remarkable fact: Many of their best seamen came from the American Midwest. Why not train sailors in the same part of the country? In 1902, a board of Navy officers concluded that “Naval Training Station Great Lakes” should be located on the southwestern shore of Lake Michigan, in Illinois—in short, exactly where it is today.

Great Lakes opened its gates on 1 July 1911. For six years after its commissioning, training at Great Lakes moved at a slow, steady pace, with approximately 2,000 recruits cycled through per year. At the beginning of 1917, Great Lakes boasted 39 permanent brick buildings, on 165 acres, with about 1,500 sailors. With American entry into World War I, the base was expanded with tent cities. In January 1917, 618 recruits arrived at Great Lakes. In February, the intake totaled 922. By April, when war was declared, more than 9,000 arrived. By the time peace was declared in November 1918, 45,000 sailors were in training, and Great Lakes had 776 buildings, with 1,200 acres at its disposal.

During the war, over 125,000 sailors had been trained at the station. The post-war era saw training activities scaled back. In 1923, only aviation activities expanded with the commissioning of the Naval Reserve Air Base, Great Lakes. Recruit training slowed to a crawl, and was even halted for a time.  Late in 1936, the Navy decided to move aviation training from Great Lakes to nearby Glenview. The increasing size of the new planes, and their demand for more runway length and numbers, made it essential.

With the outbreak of World War II in 1939, the lean interwar period ended. By the end of 1940, Congress had approved a doubling of the Navy's strength, with 170,000 sailors to sail it. In tandem with the expansion of Great Lakes, the ancestor of Training Support Center Great Lakes was founded. On 9 December 1940, the first class of the newly established Class A Service School started its studies. Between the 7 December 1941 attack on Pearl Harbor and the 14 August 1945 surrender of Japan, over four million Americans served in the Navy. One million of those sailors were trained at Great Lakes.

In 1950, the Korean War again brought Great Lakes on a war footing. In one week in 1951, the station graduated 98 companies of recruits, matching its World War II record. The Vietnam War era also saw a heightened operations tempo.

In 1988, boot camp at Great Lakes became smokeless. As of 1 April of that year, and ever since, recruits trained in smoke-free spaces.

In 1993—in the wake of the drawdown after the 1990–91 Iraq War—the Navy hosted recruit training in three facilities: Naval Training Centers Orlando, San Diego, and Great Lakes. The Base Realignment and Closure (BRAC) Commission concluded only one training facility—Great Lajkes—would continue to transform recruits into sailors. The other two would be closed. Recruit Training Command Great Lakes was subsequently rebuilt into a modern facility using the savings from the two other base shutdowns.