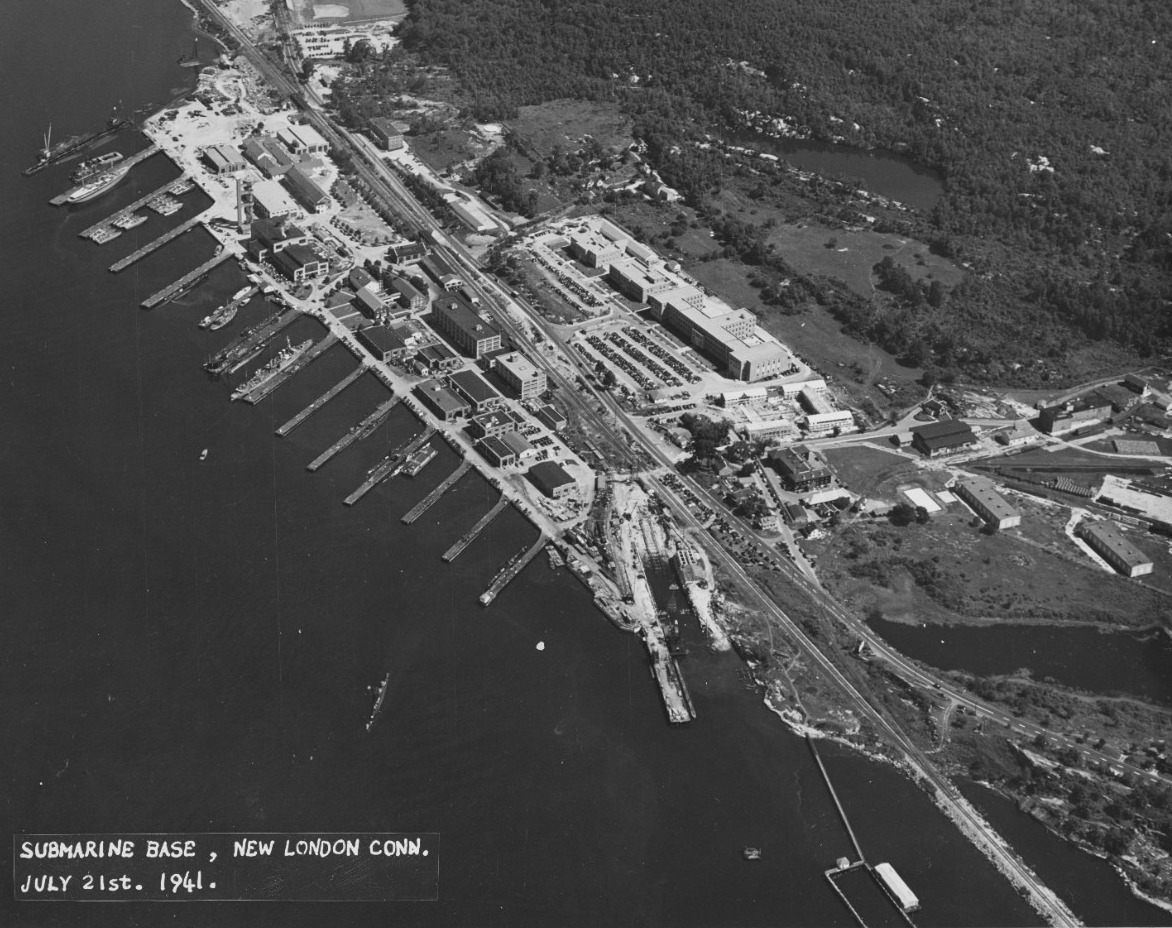 Naval Submarine Base New London is the Navy's first submarine base and the "Home of the Submarine Force."

The base’s beginnings were as a naval yard and storage depot. Established on 11 April 1868. The navy yard was first used for laying up inactive ships. In 1898, Congress approved a coaling station be built at the yard for refueling small naval ships traveling through the waters of New England. By 1912, oil had replaced coal in warships and the yard was repeatedly scheduled for closure. However, the 18 October 1915 arrival of the submarines G-1, G-2, and G-4 under the care of the tender USS Ozark (BM-7), and submarines E-1, D-1, and D-3 with the tender USS Tonopah (BM-8) gave new purpose to the yard’s existence. On June 21, 1916, the mission of the yard was changed forever when Commander Yeates Stirling assumed command of the newly designated Submarine Base, the New London Submarine Flotilla, and the Submarine School. The base property expanded during the latter part of World War I. By the end of the war, 81 buildings had been built to support 1,400 men and 20 submarines. The expansion of the base was slowed through much of the 1920s. However, during the Great Depression era, President Franklin D. Roosevelt created a series of federal government employment programs that contributed significantly to the Submarine Base. Over 26 high-quality warehouses, barracks, and workshops were built at the base under these programs. The Submarine Escape Training Tank, long known as the “Dive Tower,” was a constructed during this period and became a prominent feature to the local landscape from 1930 to 1992. Generations of submariners practiced escaping from sunken submarines through the Dive Tower by ascending in a 100-foot column of water.

The second largest expansion of Submarine Base New London occurred during World War II when it grew from 112 acres to 497 acres. Immediately after the war, the Submarine Force was significantly reduced. Most of the wartime fleet was sold for scrap metal during the early 1960s. The capabilities of the remainder were upgraded and these boats were to serve until the early 1970s.

The arrival of USS Nautilus (SSN-571), the world’s first nuclear-powered vessel, created changes at the base. Commissioned in 1954, and home-ported at New London, Nautilus became the first vessel to transit the North Pole during an historic trip across the Arctic in 1958. Retired from service in 1980, Nautilus became an historic exhibit at the Submarine Force Museum, adjacent to the base, in 1985. Technological changes contributed to a cycle of renewal and reconstruction of the various physical facilities that supported both submarine operations as well as the Submarine School. The Fleet Ballistic Missile Program further expanded the base.