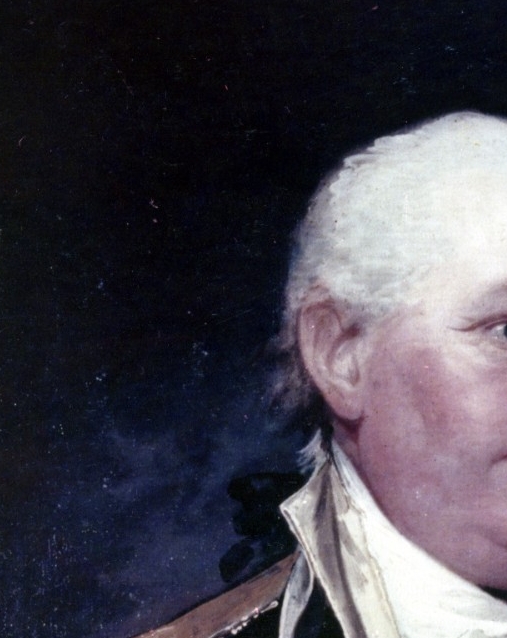 John Barry was born in Wexford, Ireland, in 1745, and died in Philadelphia on 13 September 1803. At the breaking out of the hostilities between England and the American colonies he offered his services to the Continental Congress. His ship, Black Prince, was purchased by the colonial government and was renamed Alfred. Later, on 3 December 1775, with John Paul Jones as a lieutenant, Alfred first hoisted the American (Grand Union) flag in Philadelphia.

Captain Barry was given command of Lexington on 7 December 1775. Lexington sailed 31 March 1776. On 7 April 1776, off the Virginia Capes, she fell in with Edward, tender to the British man-of-war Liverpool, and, after a desperate fight of one hour and twenty minutes, Edward was captured and brought into Philadelphia as a prize. Barry continued in command of Lexington until 18 October 1776, during which time he captured several private armed vessels.

The Continental Congress appointed him to Effingham on 6 June 1776. On 10 October 1776, Congress established the relative rank of officers of the Continental Navy and placed the name of John Barry as number 7 on the list of captains.

In December 1776, Barry, having recruited a company of volunteers for land service, took part in the Battle of Trenton. These volunteers and the Marines cooperating with them were commended by General Washington. Barry acted as an aide to General Cadwalader, and was sent on several occasions as a bearer of important dispatches. His next duty was assisting in the defense of Philadelphia and operations in the upper Delaware. When the British took possession of Philadelphia in September 1777, Captain Barry was ordered to take the uncompleted Continental frigate Effingham up the Delaware River to a place of safety. In October, the ship was ordered sunk or burned to deny her use to the British. She was sunk on 2 November, near Bordentown, New Jersey.

On 7 March 1778, Barry captured the armed schooner Alert and two ships loaded with supplies for the British Army. Barry next commanded Raleigh. He sailed from Boston on 25 September 1778, and two days later was chased and attacked by three of His Britannic Majesty's vessels. After a nine-hour running fight, he was obliged to run Raleigh ashore on an island near the mouth of Penobscot Bay, but escaped to the mainland with most of his crew. Though he lost his ship, Barry was highly commended for his gallantry.

The privateer Delaware was the next ship assigned to Captain Barry. In November 1780, Barry was ordered to command Alliance and took John Laurens, Special Commissioner, to France. Due to difficulty obtaining a crew, the ship did not sail until 11 February 1781. On the passage to France, she captured the Privateer Alert. On the return voyage, Alliance also captured the privateer Mars, and Minerva.

On 29 May 1781, after several hours of fighting, Barry captured H.B.M.S. Atlanta and later Trepassy. Barry was wounded during the engagement with Atlanta. He continued in command of Alliance and captured numerous prizes in 1782.

In March 1783 the last naval engagement of the Revolutionary War was fought by Barry in Alliance against the British man-of-war Sybylle. Though the ship surrendered to him, he was obliged to abandon his prize to escape the rest of the British squadron. At the time of the fight with Sybylle, Barry was convoying Duc de Lauzane, carrying money and supplies from the West Indies to the United States. His action enabled Duc de Lauzane to escape and reach port safely.

Upon reorganization of the Navy on 5 June 1794, Captain Barry was appointed number one on the list of captains. His commission was signed by General Washington, dated 22 February 1797. He was ordered to superintend the building of the frigate United States, and to command her when finished. He was actively engaged in the Naval War with France, 1798−1801, and captured a number of French vessels in the West Indies. By the direction of the Navy Department, he brought United States to Washington, where she was laid up. This ended Barry's active service. He was employed in testing cannon for the government in 1801−1802, and was selected to command the Mediterranean Squadron but was too ill to take the duty. He died at his country residence near Philadelphia (Strawberry Hill). 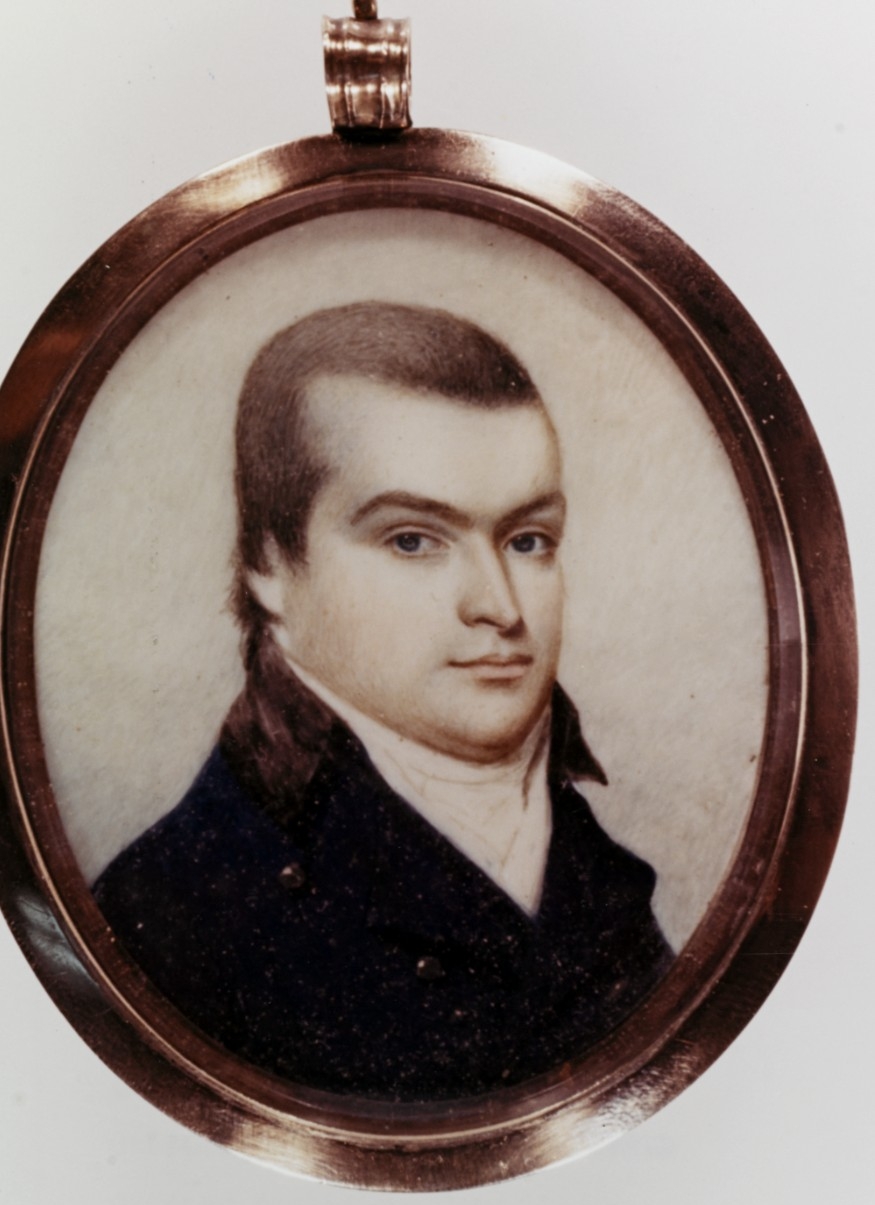 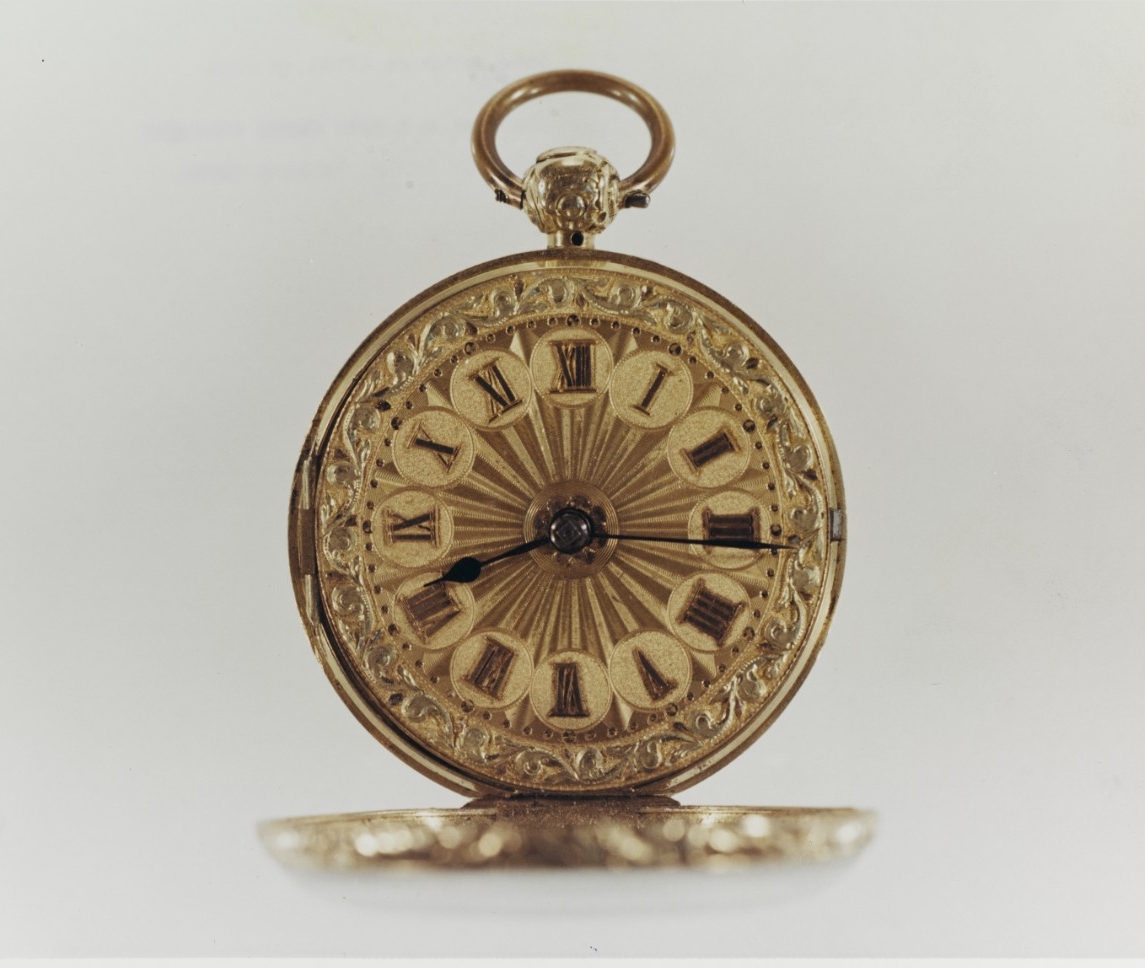 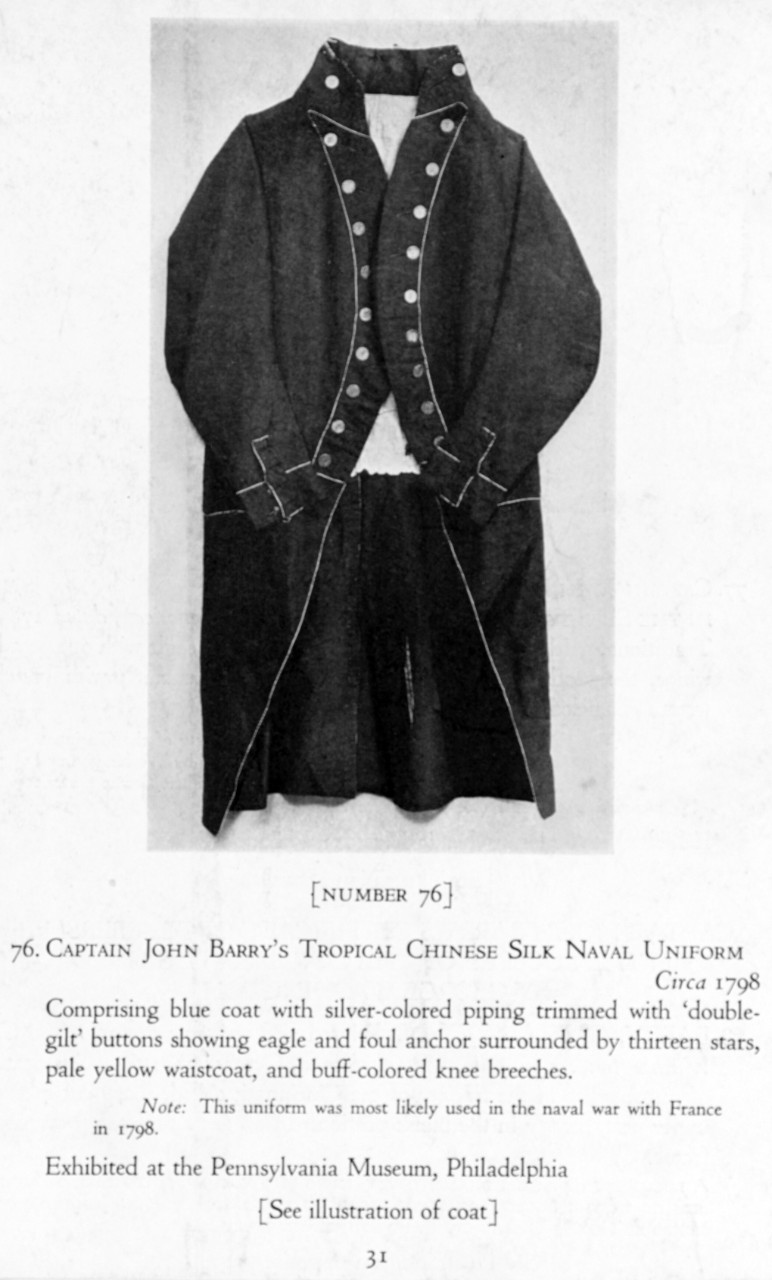 Naval uniform worn by Barry circa 1798. Exhibited at the Pennsylvania Museum, Philadelphia. (NH 56858) 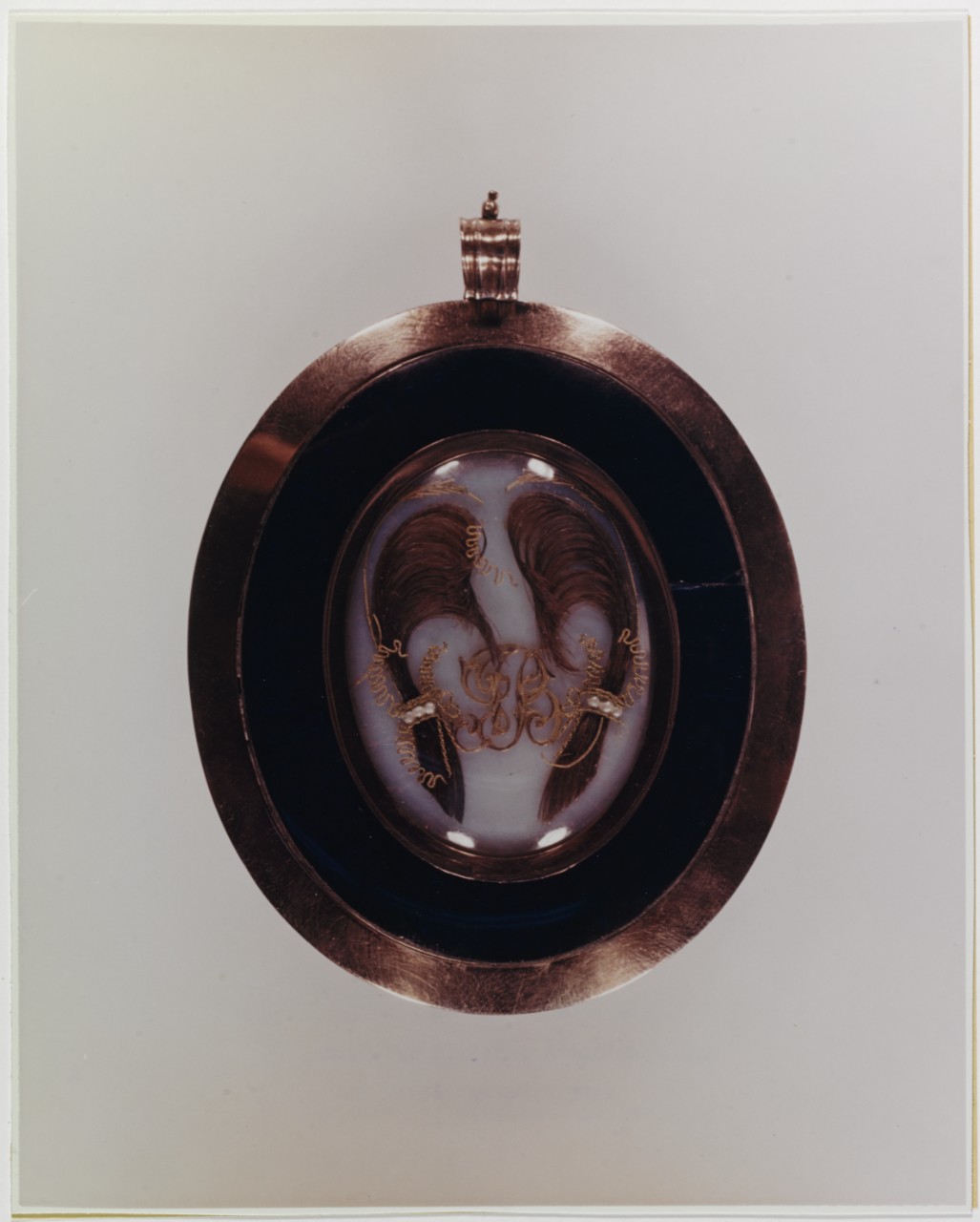 John Barry's hair encased and framed; the reverse of the miniature portrait of Barry. (NH 51517-KN) 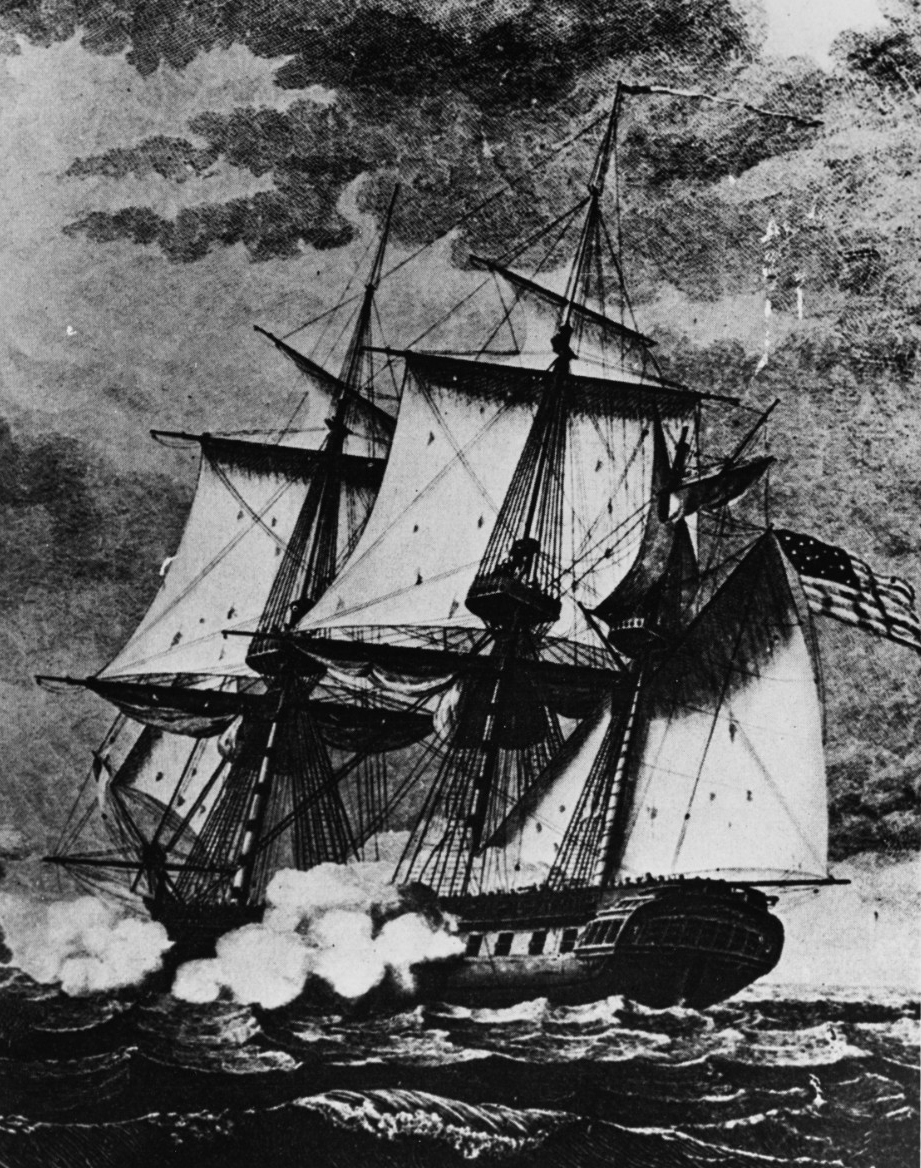 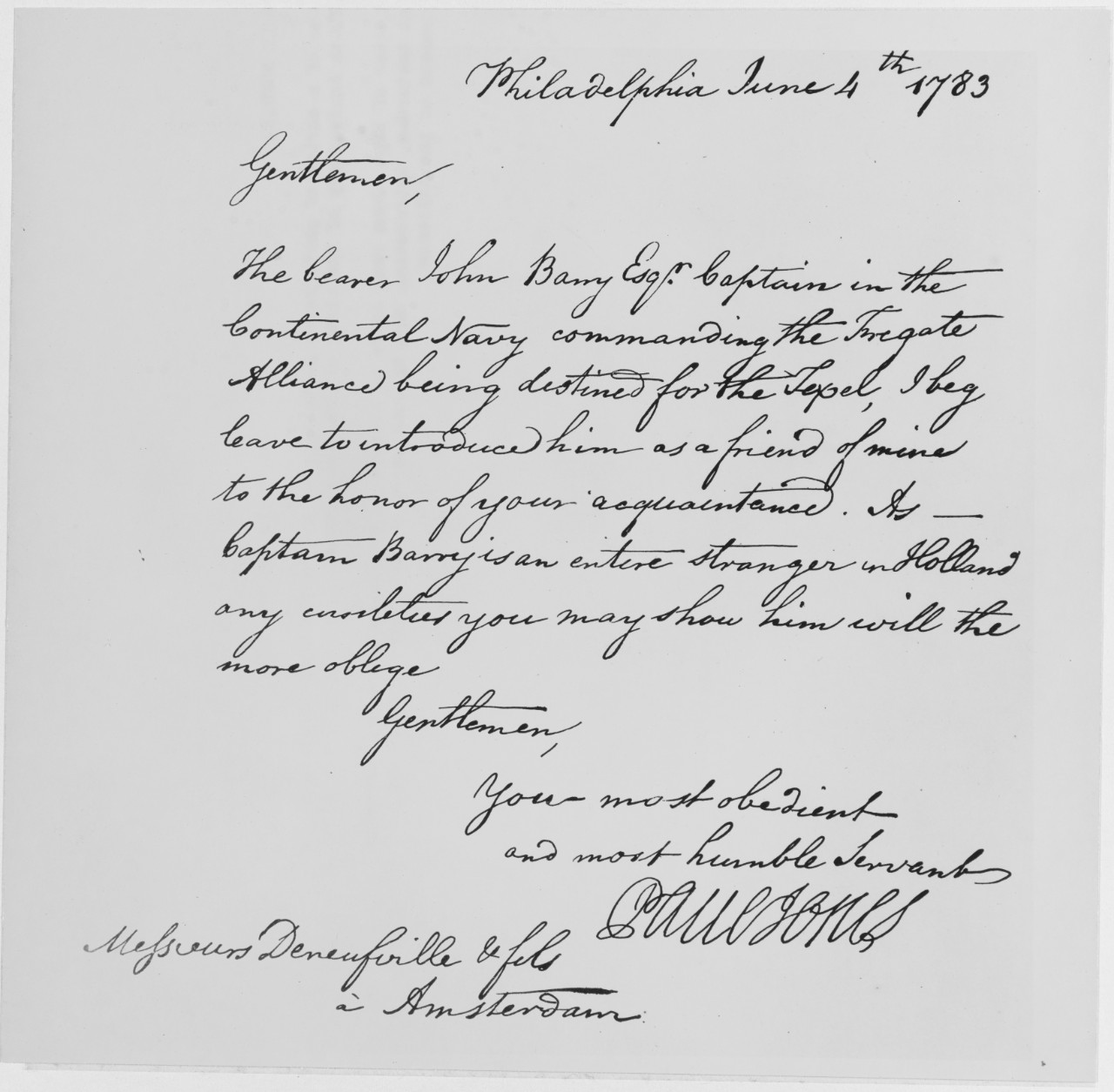 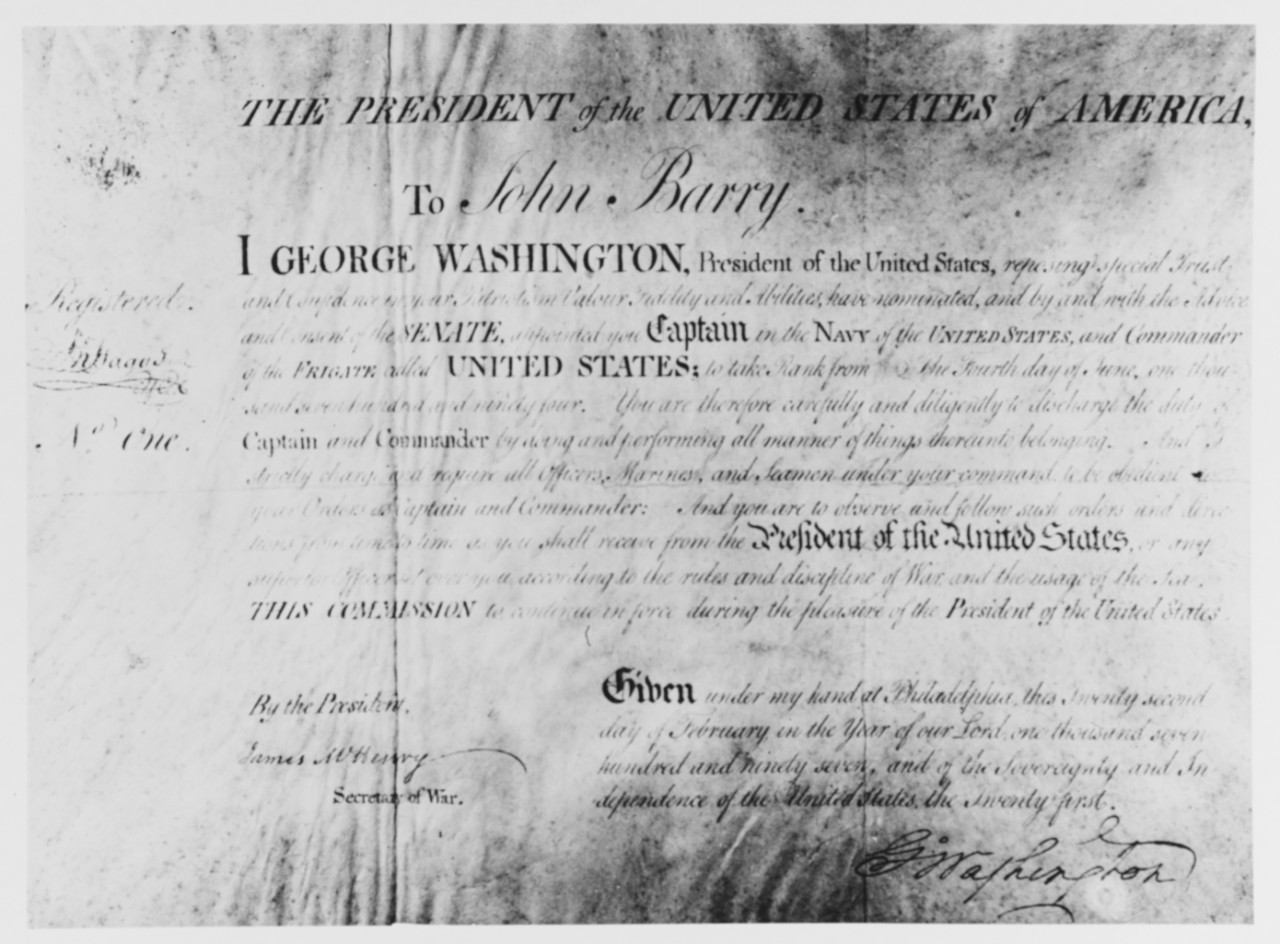 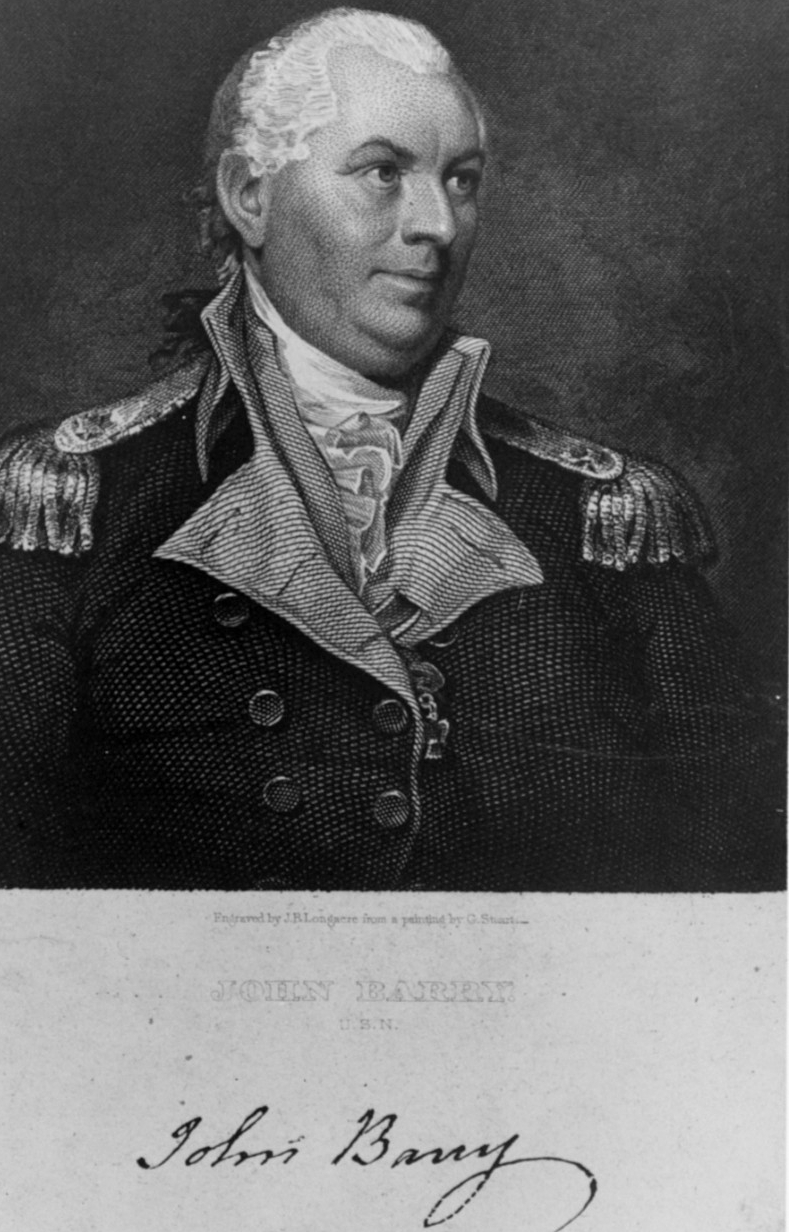 Engraving by J.B. Longacre, after the painting by Gilbert Stuart, published in National Portrait Gallery of Distinguished Americans, by James Herring and James Longacre, 1859. (NH 56857) 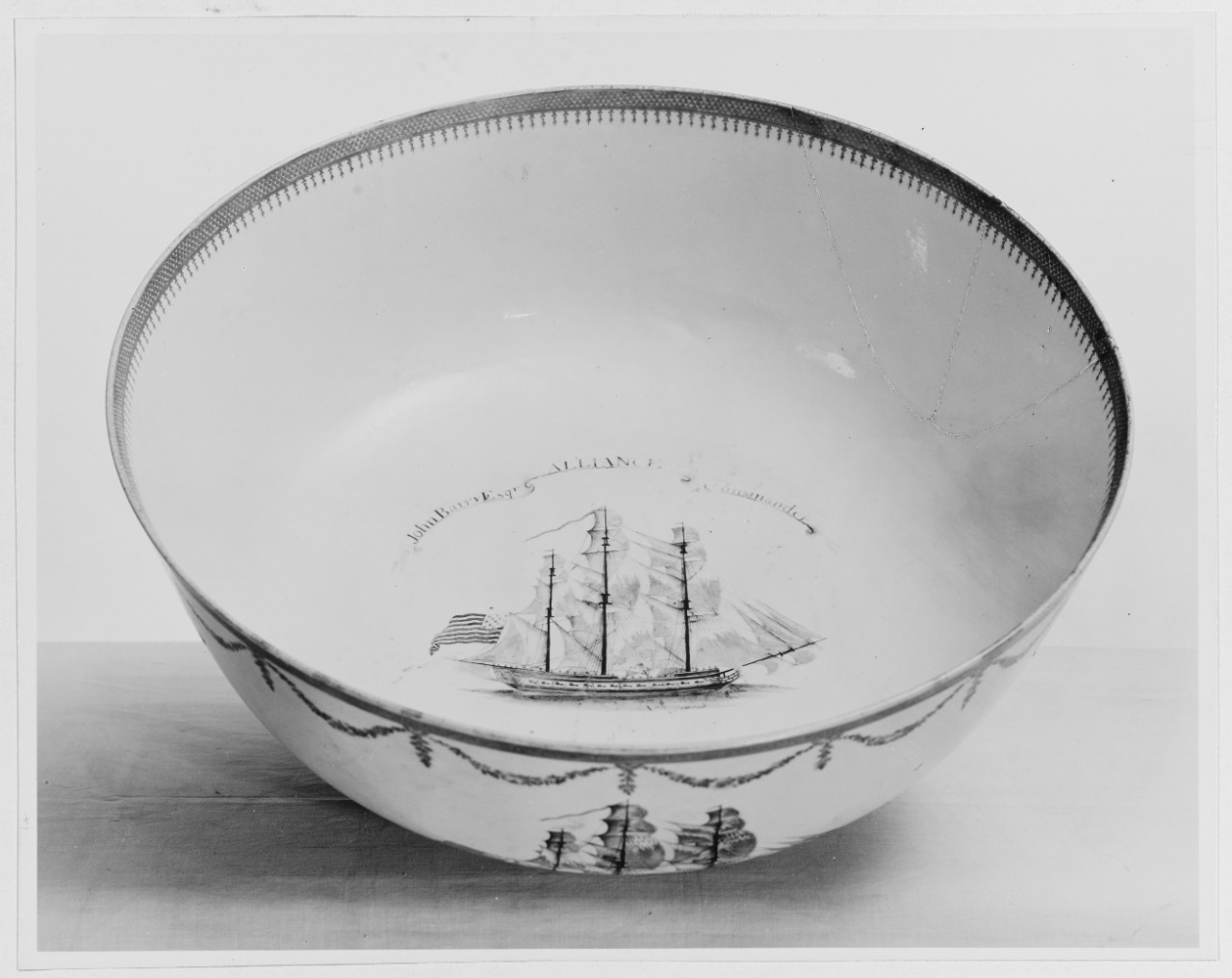 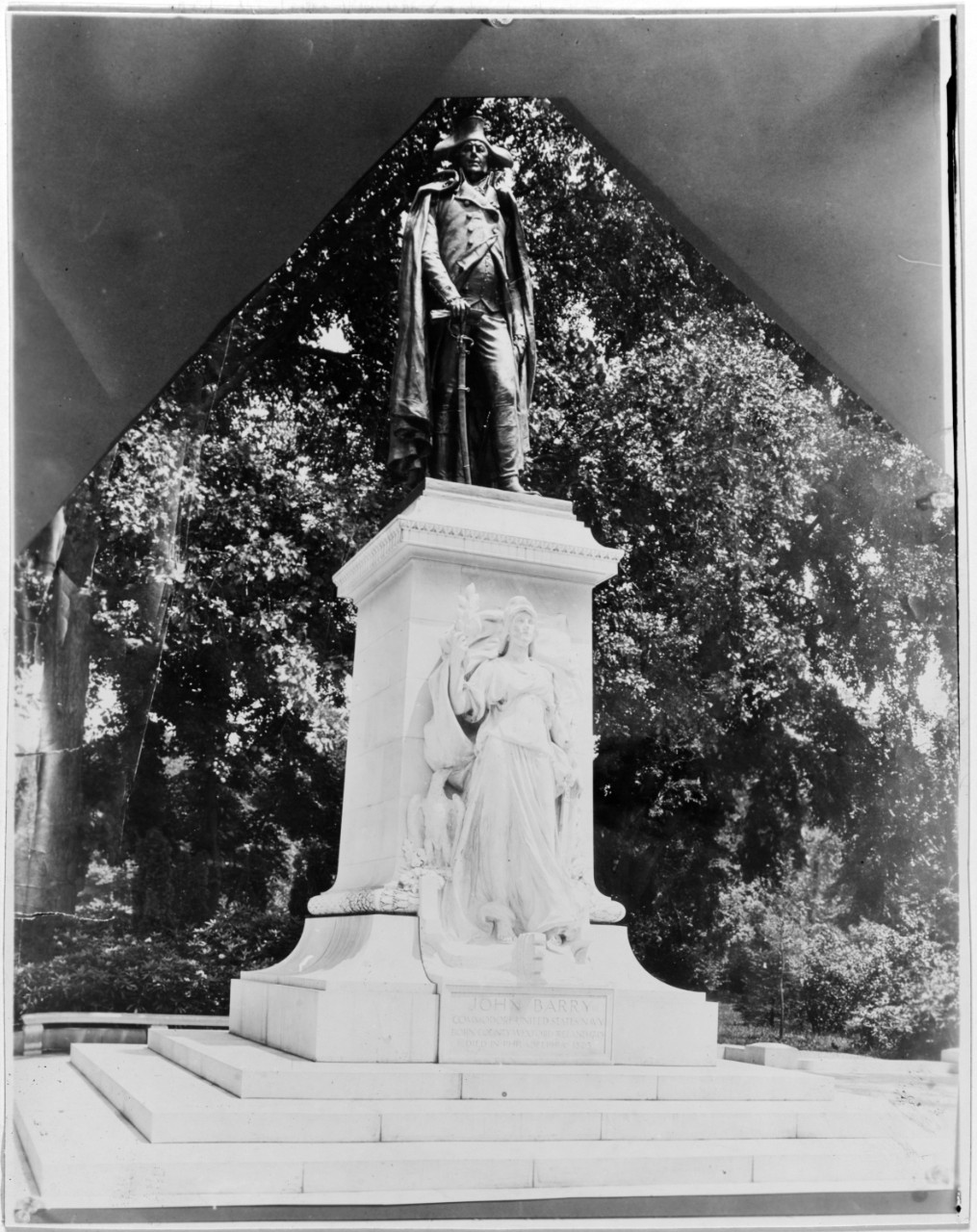 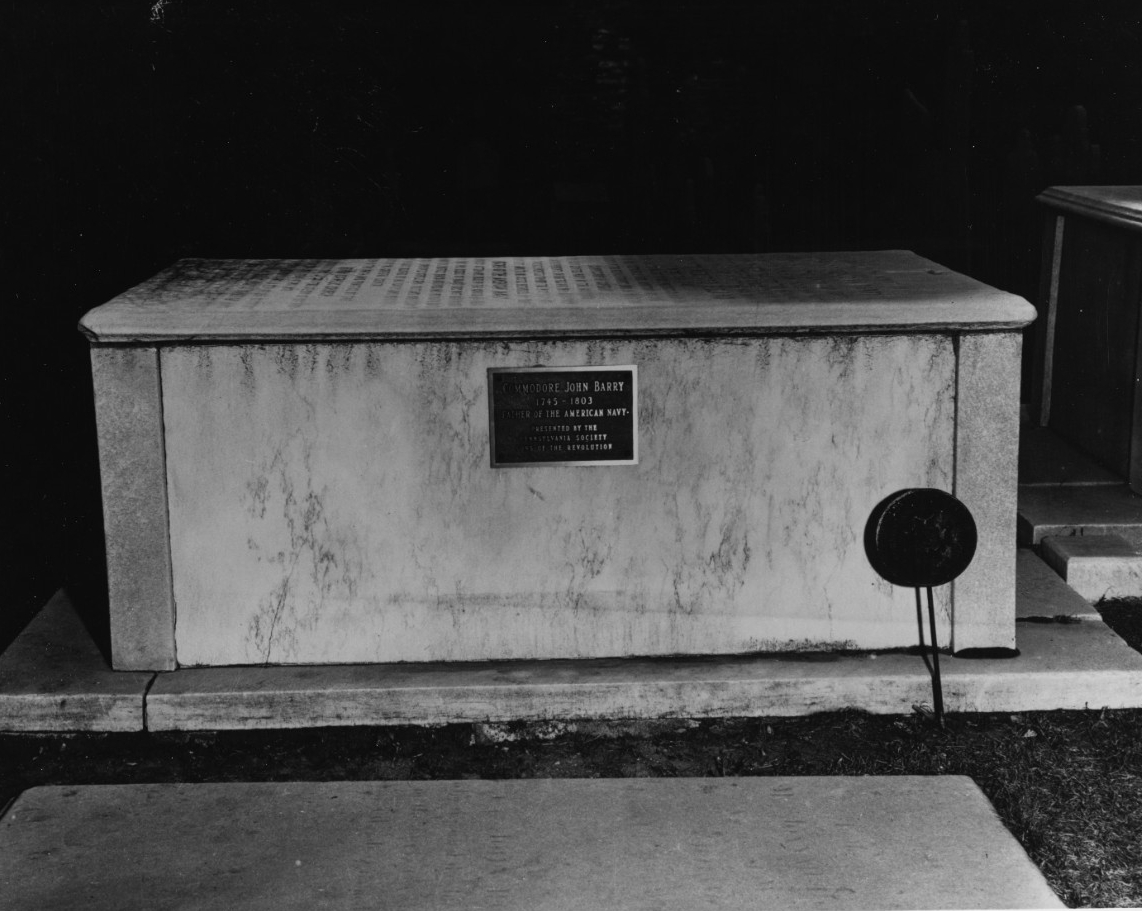 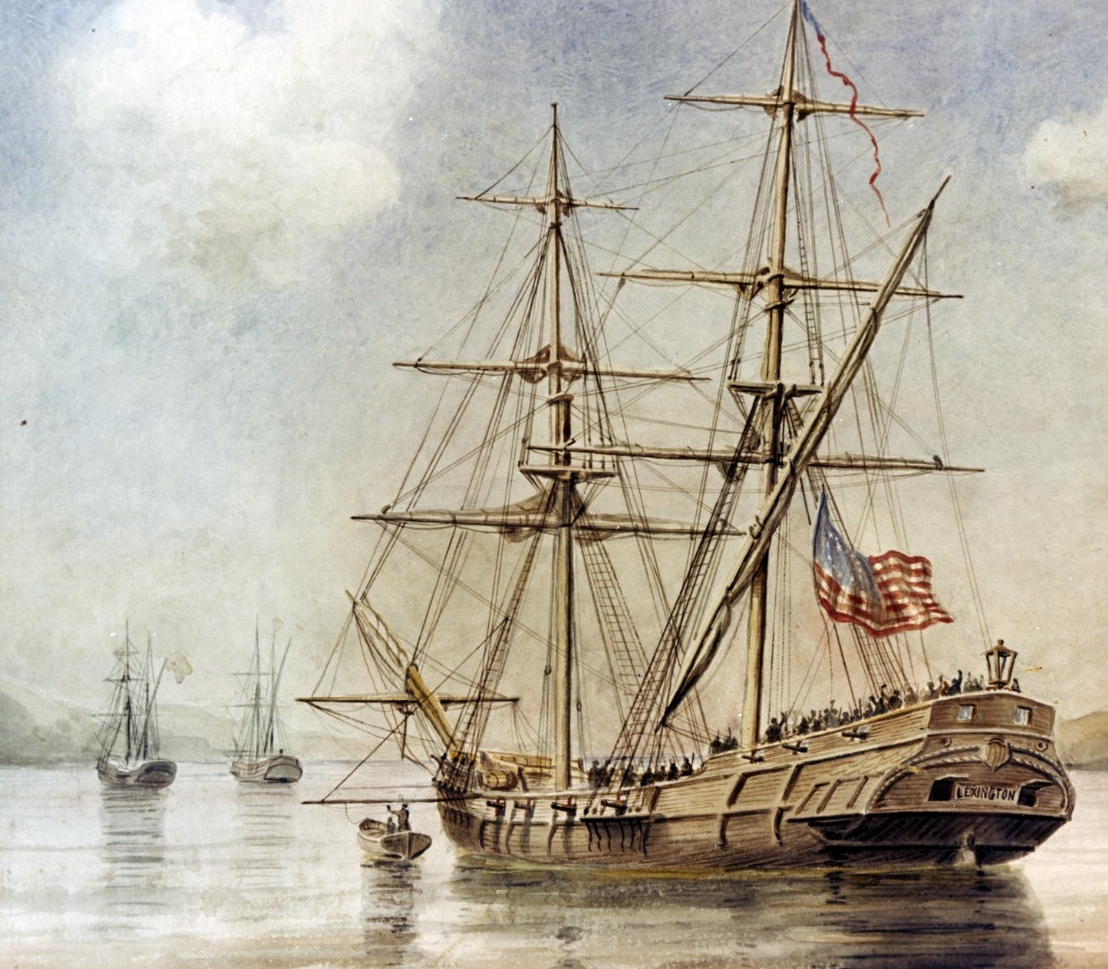 "Raising the Stars and Stripes for the first time in home waters." Painting by F. Muller, circa 1900, depicting the raising of the Continental Ensign on board the brig Lexington, commanded by John Barry, 1776. (KN-457) 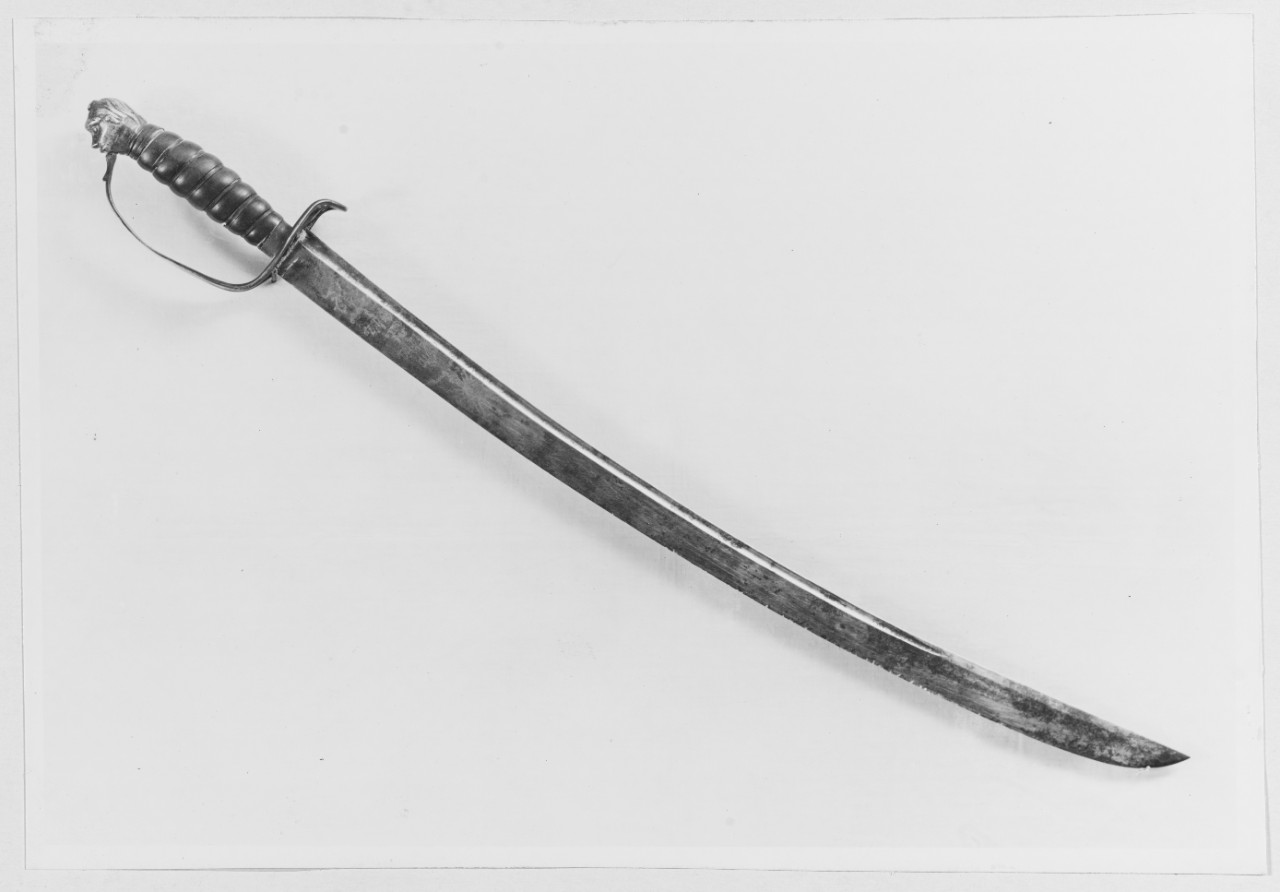 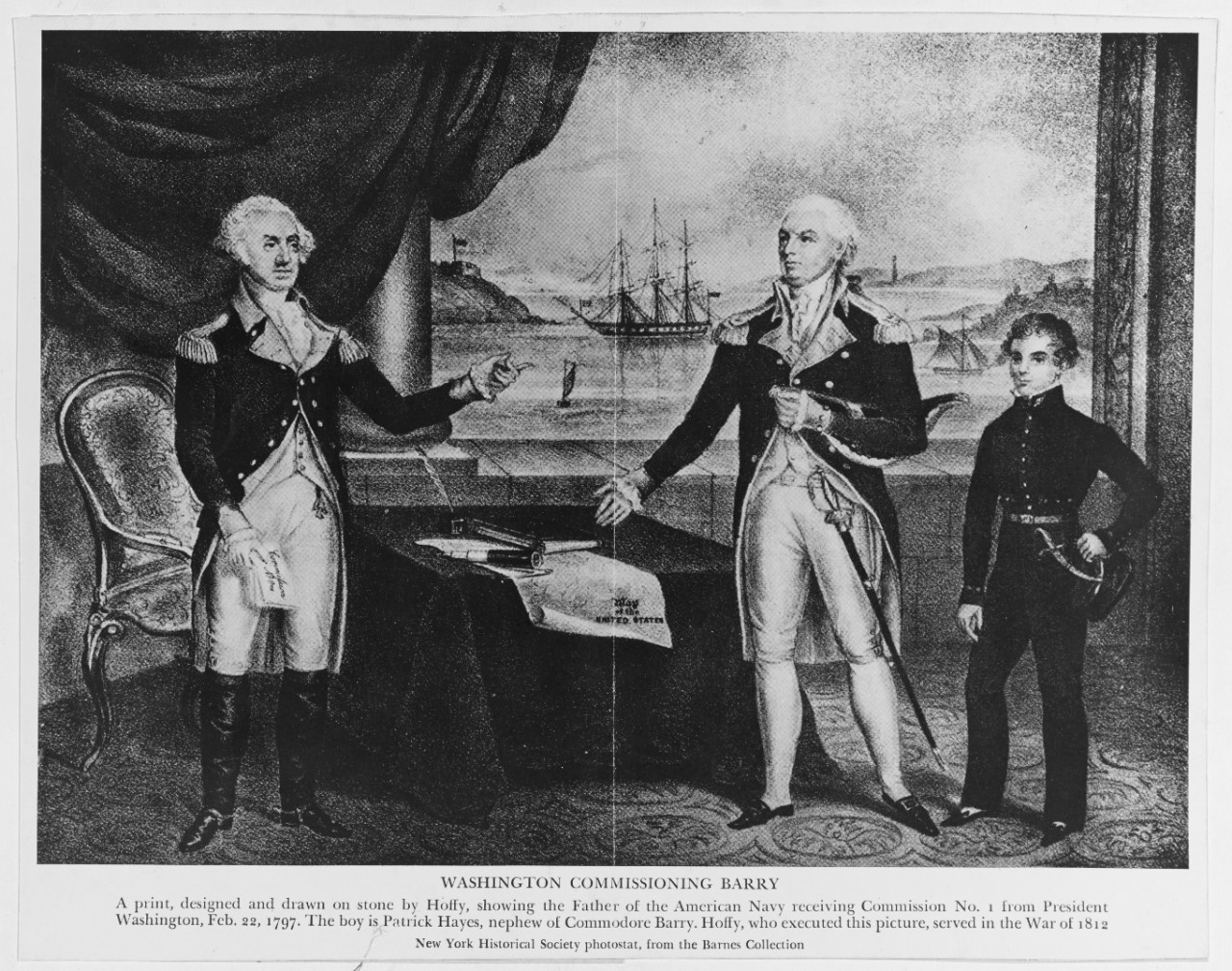