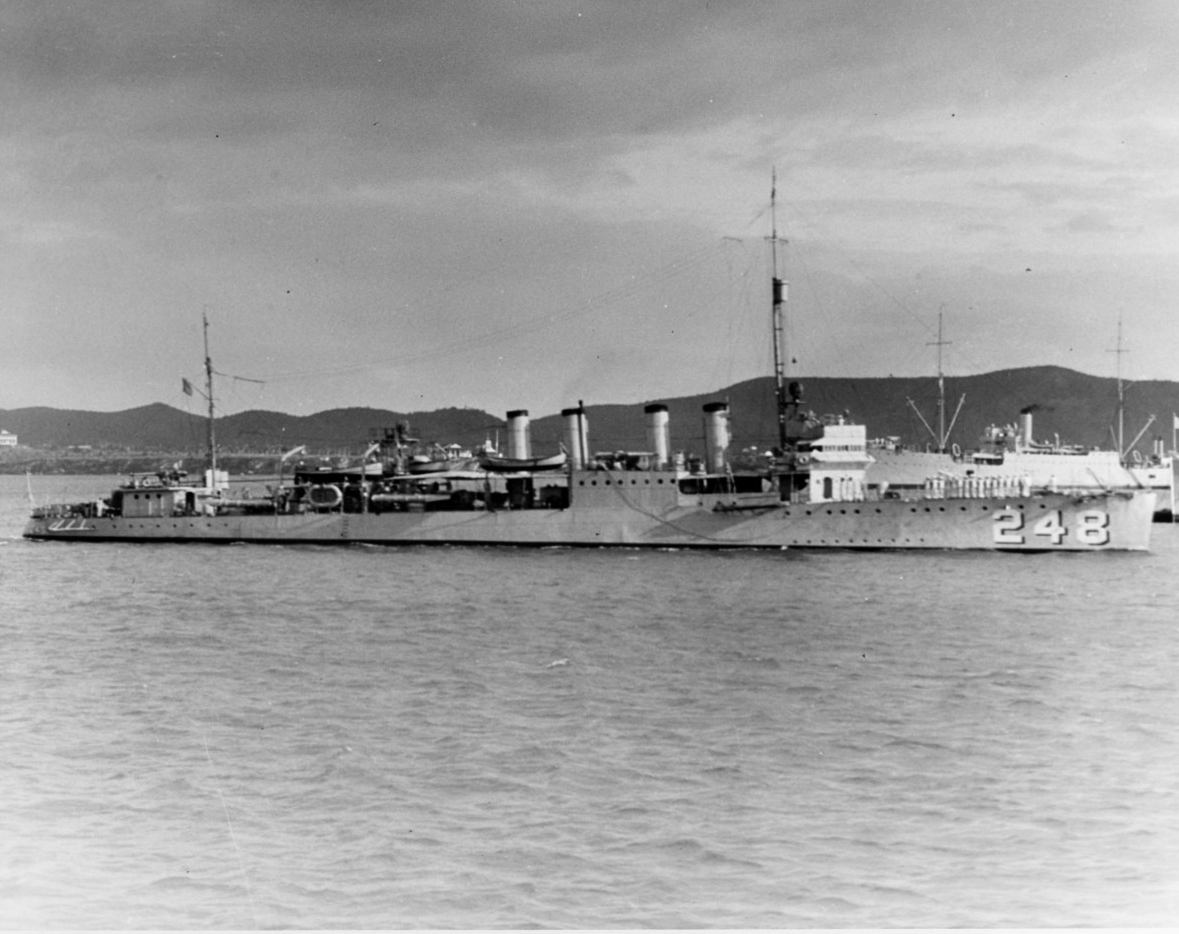 Born in County Wexford, Ireland, in 1745, John Barry was appointed a Captain in the Continental Navy 7 December 1775. He commanded Lexington and Alliance. He was seriously wounded 29 May 1781 while in command of Alliance during her capture of HMS Atalanta and Trepassy. Appointed senior captain upon the establishment of the U.S. Navy, he commanded the frigate United States in the Quasi-War with France. Commodore Barry died at Strawberry Hill, near Philadelphia, 13 September 1803 and was buried in St. Mary's Cemetery, Philadelphia.

Barry was held in reserve commission until 15 November 1921 when she was placed in full commission and reported to the Atlantic Fleet. In October 1922 she departed Hampton Roads, Va., for the Mediterranean where she served with the U. S. Naval Detachment in Turkish Waters until July 1923. Returning to the east coast 10 August 1923 she joined Destroyer Squadron 14, Scouting Fleet. Later in August and in September, Barry operated on "plane guard" in the Atlantic for the U.S. Army's "Around the World Flight" and was stationed between Labrador and Nova Scotia, Canada. When one of the three Army planes ditched owing to engine trouble, Barry transported the pilots to Pictou, Nova Scotia, where they boarded a replacement plane to continue their flight home to Seattle via Boston and across the United States.

Barry joined Destroyer Division 67 in the Canal Zone 18 October 1940. Still on duty there when the United States entered World War II, she was assigned escort and anti-submarine warfare missions against the German submarine menace in the Atlantic. Early in 1942 Barry operated in the Caribbean escorting convoys between Guantanamo Bay, Cuba, and Panama; and Curacao and Trinidad. Later in the year and throughout the first half of 1943 she performed escort duties in the South Atlantic, operating from Trinidad.

Between July and November 1943 she served as a unit of TG 21.14, a hunter-killer group which operated along the North Atlantic convoy lanes. The group conducted two sweeps (30 July-10 September and 28 September- 8 November) during which aircraft from Card (CVE-11) sank eight German submarines. Barry and Goff (DD-247) rescued survivors of Borie (DD-215) after she was mortally damaged 1 November while sinking the German submarine U-405 by ramming.

Between 15 and 20 August 1944 she landed her troops on the Islands of Levant and Port Cros, as well as on the mainland of France. Between August and December Barry served on escort duty in the western Mediterranean and then returned to the United States, arriving at Norfolk 23 December 1944. After brief repairs Barry departed for the Pacific and arrived at Pearl Harbor 24 March 1945. After training in the Hawaiian Islands, she arrived off Okinawa 16 May and performed patrol and escort duties during the occupation of the island.

On 25 May she was attacked by two kamikazes while on patrol 35 miles northwest of Okinawa. One was shot down, but the other broke through the barrage and struck Barry below her bridge. Twenty-eight of her valiant crew were wounded by shrapnel. The explosion of the plane's gasoline tanks and bomb ignited fuel oil escaping from Barry's ruptured tanks. The fire threatened the forward magazine which could not be reached to flood. At 1340, 40 minutes after the plane struck, the commanding officer gave the order to abandon ship. Barry's boats were lowered and all hands safely cleared the side.

At 1500 the water had risen until the forward magazine was covered, minimizing the danger of explosion. A skeleton crew, together with parties from Sims (APD-50) and Roper (APD-20), then reboarded Barry and the last fires were extinguished at 0630 the next day.

Barry was towed to the anchorage at Kerama Retto 28 May and found too extensively damaged to warrant repair or salvage. Stripped of useful gear, she was decommissioned 21 June 1945. Later in the day she was towed from the harbor of Kerama Retto to be used as a decoy for the kamikazes. While under tow she was attacked by Japanese suicide planes and sunk along with her escort, LSM-59.

Barry received the Presidential Unit Citation as a unit of TG 21.14 and four battle stars for her actions in the Atlantic and Pacific during World War II. 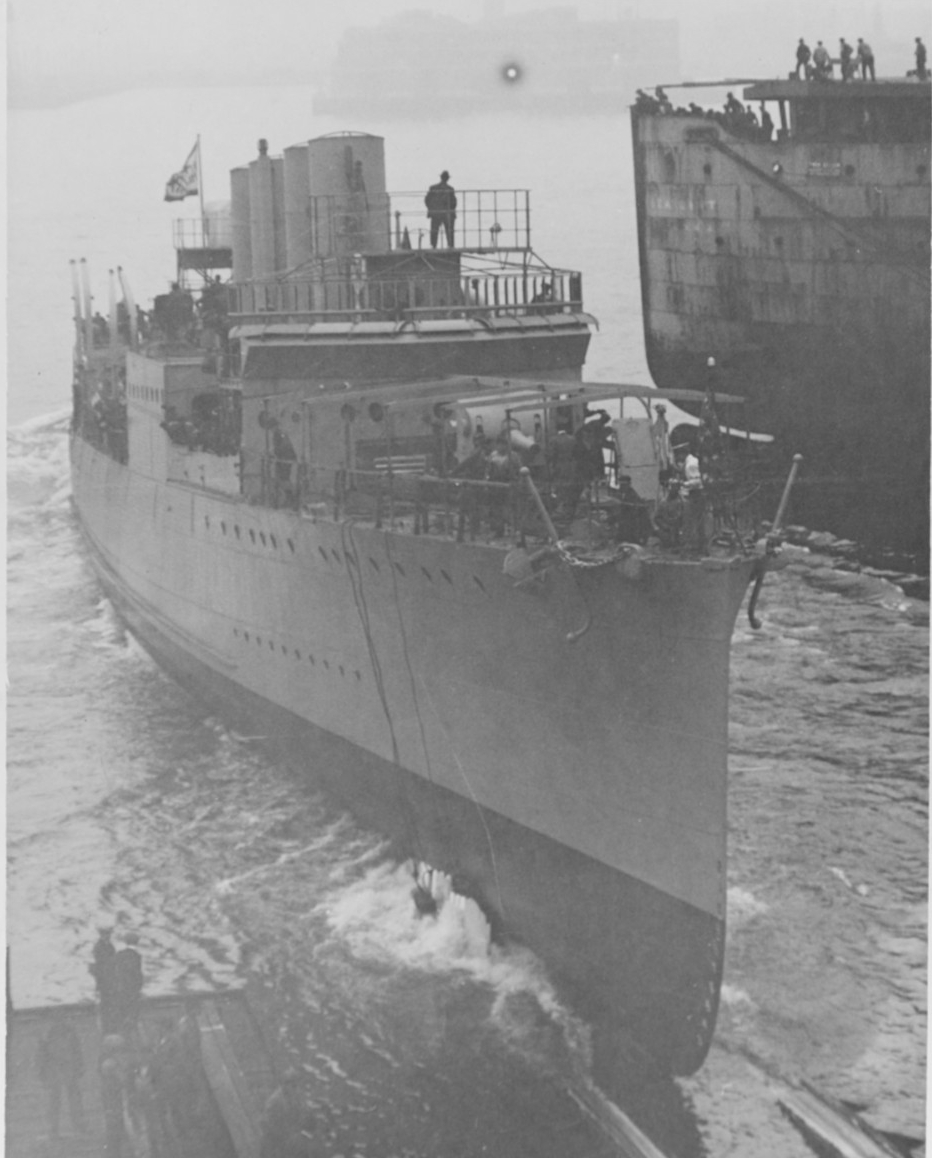