The Birth of the U.S. Navy 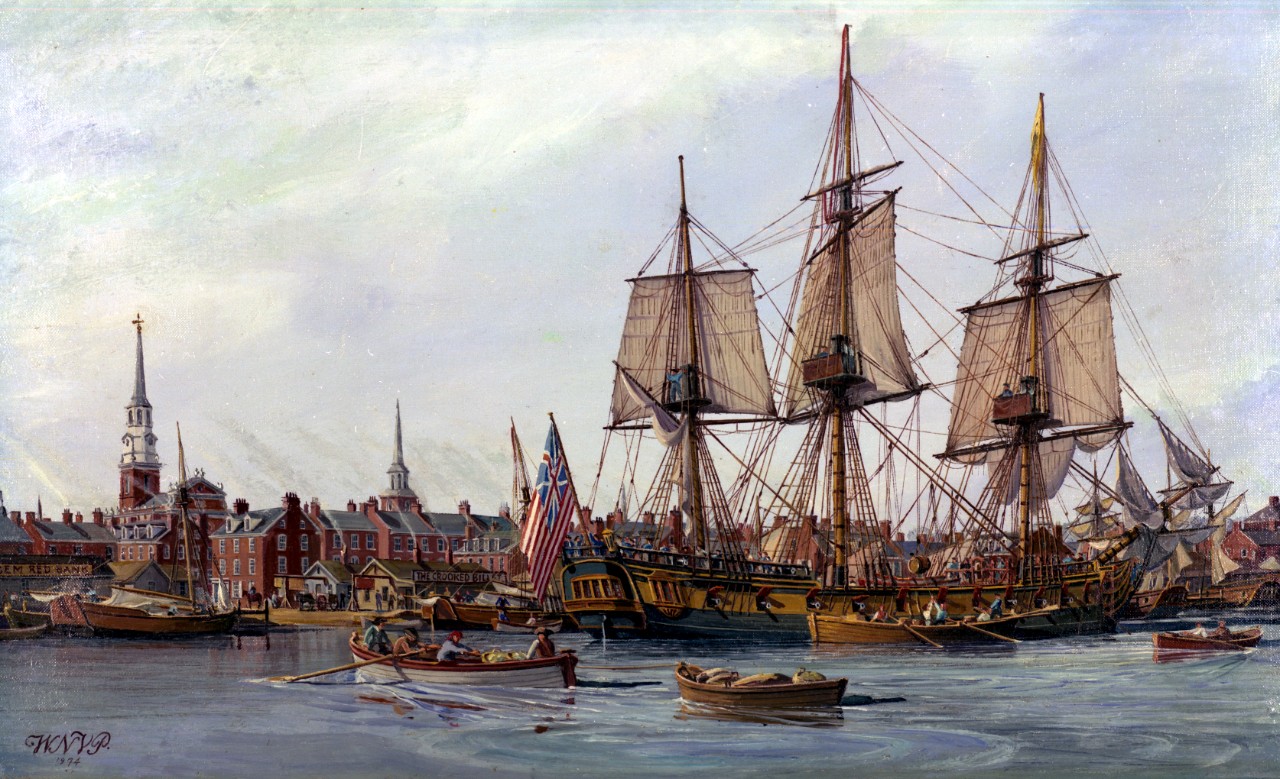 “Let Americans disdain to be the instruments of European greatness! Let the thirteen States, bound together in a strict and indissoluble Union, concur in erecting one great American system, superior to the control of all transatlantic force or influence, and able to dictate the terms of the connection between the old and the new world!”1

So ended Alexander Hamilton’s essay (no. 11 of the Federalist Papers, 1787) on the crucial role a navy would play in safeguarding America’s commerce and reputation. The essay also laid out all the hopes of the new nation: peace, prosperity, and respect from the mighty nations of Europe.

Yet the Navy’s creation and development proceeded piecemeal and haltingly in face of seemingly intractable political, ideological, and economic obstacles. It took a quarter century for the Navy to emerge as a stable institution, and although we now celebrate the birthday of the Navy on 13 October, that date in 1775 is but one of several important steps on the way to a permanent naval defense force for the American people.

The origins of the Navy actually predate independence by almost a year. On 26 August 1775, the assembly of the colony of Rhode Island sent its delegates to the Continental Congress in Philadelphia to request that “a fleet of sufficient force for the protection of these colonies” be established.2 Although the Congress had already urged individual colonies to mount their own naval defenses, the Rhode Island Assembly understood that securing American ports and waters would be a bigger job than any one colony could handle.

Philadelphia agreed on 13 October 1775 and created an advisory committee staffed by John Langdon of New Hampshire, Silas Deane of Connecticut, and John Adams of Massachusetts. (Adams would become a lifelong champion of the Navy.) In addition to protecting American trade from British blockade and predation, the committee also made recommendations for intercepting British ships laden with supplies for the king’s forces in North America.3 Within hours, the Congress approved the committee’s recommendation that Massachusetts supply General George Washington, then stationed in Massachusetts, with an armed schooner and a sloop for the purpose of seizing British supplies.4 At the same time, Connecticut and Rhode Island would arm merchant vessels to patrol the near North Atlantic for British transports.5 These small forays found immediate success.6

On the heels of these successes, the Continental Congress committed itself to naval expansion in three key ways. First, the Congress authorized the purchase of four more ships of war. Second, it enlarged the Naval Committee to seven men. And third, it extended the committee’s brief to building up a naval force south of New England waters, all the way to Georgia, “for the protection and defense of the United Colonies.”7

As plans materialized, the Congress received some bad news from London—news that would push the delegates to commit even further to the establishment of an American navy. On 9 November 1775, word arrived that George III of Great Britain had refused the Olive Branch Petition, the Congress’s last-ditch effort to preserve peace with the mother country, and that the king had declared the colonies to be in a state of open rebellion. The Continental Congress now geared itself up for a protracted struggle on the seas.

In the ensuing weeks, the Congress passed a series of resolutions to purchase more ships; to allocate funds to the naval committee; to call up “American Marines,” the country’s first; to approve the set of rules and regulations, modeled on those of the Royal Navy and penned by John Adams, for this new “American Navy”; and to authorize the capture of all British vessels involved in the suppression of the colonies’ nascent revolt.8

Taken between 13 October 1775, and the end of that year, these actions served to establish the first American navy.

When the American Revolution ended, however, the Navy passed into disuse and oblivion. The Articles of Confederation, which came into force in 1781 and bound the former colonies into a loose arrangement of sovereign states, did not provide the central government with powers of taxation sufficient for the maintenance of anything as expensive as a national navy.9 Moreover, peace with Great Britain removed the force that had called the Continental Navy into existence in the first place: imminent danger to American commerce from British blockade and predation.

Nevertheless, dangers persisted. In 1785, Barbary (North African) pirates seized their first American vessels and tried to ransom 22 passengers and crew.10 Many Americans, Thomas Jefferson included, believed that the British were behind these misfortunes.11 At any rate, the states were helpless without naval power.  “The Americans cannot protect themselves,” an English politician quipped, for “they cannot pretend to a navy.”12

Relations among the United States, Great Britain, and France ultimately caused Congress to reestablish a navy but only after the constitution had been ratified and the federal powers of taxation had increased.

In the course of the French Revolutionary wars (1792–1802), which quickly spilled into the Atlantic world, Americans’ neutrality on the seas became difficult to support, and American merchants in particular began to press Congress for a standing naval force that could defend against ships of war and privateers, often hired by France or Britain for the express purpose of depredating American merchant vessels.

As Britain and France began to wage economic war on each other, the British government blocked American ships from the French West Indies, a crucial source of sugar and other commodities for United States merchants. On the high seas and in nearby waters, British war ships also harassed and attacked American merchant vessels as part of a wider effort to choke the economy of the French empire and diminish its war-making capabilities. On behalf of President Washington, Secretary of State Edmund Randolph implored Congress to do something about British violations of Americans’ rights as neutrals to trade with those countries presently at war with each other.13

Yet Congress still waffled on the issue of a navy. Where the president, his supporters, and most Federalists saw a navy as essential to prosperity at home and prestige abroad, the president’s detractors and most Anti-Federalists had serious reservations.14 Americans against the establishment of a navy were worried about the enormous debts it would rack up, the federal overreach it would portend, and the devastating retaliation it might provoke from Britain.15

Events in the Mediterranean ultimately forced the issue in early 1794. Algerine (Barbary) pirates, having signed a truce with Portugal and been paid off by the British, began to attack American ships in full force and not just in the Mediterranean. On 2 January 1794, Congress resolved to create “a naval force, adequate to the protection of the United States against the Algerine corsairs.”16 A committee formed and recommended that a fleet of six frigates be constructed. The committee, as well as the fifty congressmen who voted for the subsequent Act to provide a Naval Armament of 27 March 1794, which finally re-established the United States Navy, mostly represented maritime trading cities of the north and east, where the first calls for a naval force had originated back in 1775.

In order to spread the economic favors that the construction of a navy would bring, Congress had no two frigates built in the same yard. Portsmouth, New Hampshire, got Congress; Boston, Constitution; New York City, President; Philadelphia, United States; Baltimore, Constellation; and Gosport (now Norfolk), Virginia, Chesapeake. The oak came from as far away as Georgia.17

Also a veteran of the Revolution, Henry Knox, now President Washington’s Secretary of War, assumed responsibility for the new Navy and perhaps did more than anyone else to ensure its survival. When in late 1794 the Washington administration managed to come to terms with Britain and the Barbary pirates, the need for a navy appeared to have evaporated before the fleet even materialized. Moreover, Congress had approved the construction of the Navy for one purpose and one purpose only––to counter the Barbary threat. Nevertheless, Knox proceeded with construction, and he did so to higher standards—and at greater expense—than Congress had authorized.18 In his own words, Knox was trying for nothing less than a fleet of frigates, “superior to any of the European powers.”19

Knox’s energies and the efforts of his successors could only take the project so far, however. The immediate danger to American maritime trade having subsided, Congress hesitated to authorize the continuation of construction. Looming conflict, this time with France, would speed their decision.

Although the Navy originated in 1794 amid worries about the British and the Mediterranean, it was concern over France and the Caribbean that made the Navy a permanent institution.

Caught up in the geopolitics of the French Revolutionary wars, the United States found itself after 1794 on the wrong side of France, now a republic.20 Diplomatic relations between the United States and France, the colonists’ crucial ally in the American Revolution, had so deteriorated by 1797 that French leaders refused even to receive the American minister to Paris.21 For the better part of a year, already, French warships and privateers had been attacking merchant vessels in the West Indies.22

These attacks and the mounting diplomatic tensions between France and the United States produced pressure on President Washington and Congress to resume work on a United States navy.23 In spring of 1796, Congress finally authorized completion of three of the six frigates commissioned back in 1794. By the end of 1797, United States, Constellation, and Constitution, the Navy’s first purpose-built warships, were ready for service.24

When John Adams assumed the presidency on 4 March 1797, the Navy now had its staunchest defender yet. Indeed, the Navy was fast becoming the centerpiece of Adams’s foreign policy, which sought stability in the West Indies, now in the throes of revolution, and an end to French predation on American commercial shipping.25 With the French threat in the West Indies growing, Congress allowed Adams to man and employ the Navy’s three completed frigates and authorized a several-fold expansion of the fleet.26 Work soon resumed on the other half of the original six frigates––the Congress, Chesapeake, and President, each of symbolic importance as the first ships commissioned by the United States Navy.27

Yet the Navy still lacked an adequate bureaucracy to oversee its expansion and operations. Members of congress were already complaining in March 1798 about cost overruns and mismanagement by the Department of War, which, for its part, did not have the resources to oversee the naval buildup now underway, according to Secretary of War James McHenry.28

Congress’s solution was an act establishing a new Department of the Navy with the power to make contracts, disburse funds, and manage the fleet. President Adams signed the act into law on 30 August 1798, just as chances for peace collapsed under the strain of the “XYZ” affair, the diplomatic incident that sent the United States into undeclared naval war with France. For this conflict, Congress authorized the purchase of more vessels to defend American interests against the French in the West Indies, and by the end of May, the United States Navy, with the crucial support of its brand-new government Department, was engaged in battle in the Quasi-War (1798–1801), the first large-scale naval engagement in United States history.29

At the end of Adams’s presidency in 1801, the Navy now boasted fifty vessels, a count it maintained down to the Civil War.30

1 Alexander Hamilton, “The Federalist Papers, No. 11: The Utility of the Union in Respect to Commercial Relations and a Navy,” Avalon Project, Yale Law School, accessed February 12, 2019, http://avalon.law.yale.edu/18th_century/fed11.asp, accessed February 11, 2019.

2 Raymond G. O’Connor, Origins of the American Navy: Sea Power in the Colonies and the New Nations (New York: University Press of America, 1993), 15.

16 Crawford and Hughes, Reestablishment of the Navy, 7.

21 Crawford and Hughes, Reestablishment of the Navy, 7.

23 Crawford and Hughes, Reestablishment of the Navy, 7.

26 Crawford and Hughes, Reestablishment of the Navy, 8.

Palmer, Michael A. “The Navy: The Continental Period.”