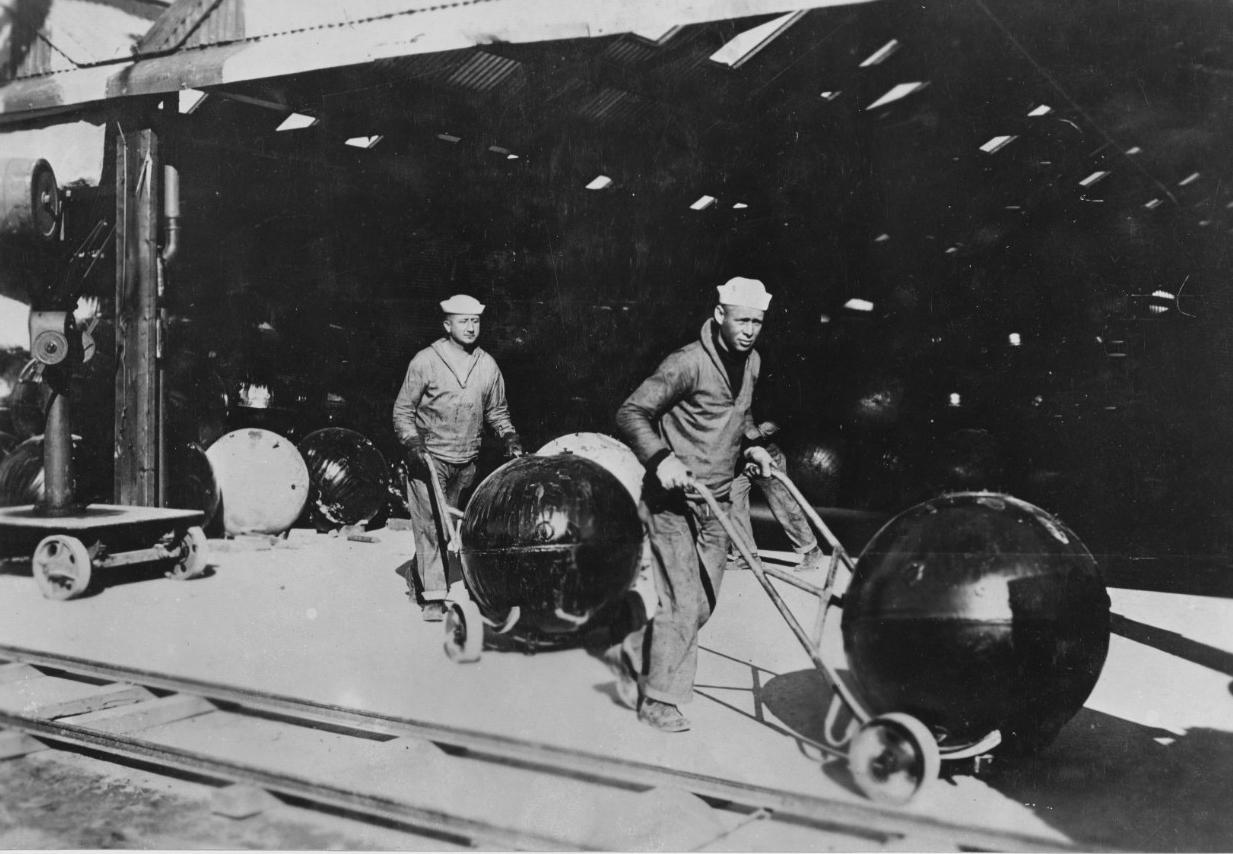 Trucking mine spheres from the bulk stores to the assembly shed. Naval History and Heritage Command photograph, NH 123955.

A naval mine is a self-contained explosive device placed in the water deemed to destroy submarines and surface vessels. Mines are also used to deny the enemy access to areas and to quarantine the enemy into specific locations. The use of sea mines dates back to the American Revolution when David Bushnell, while a student at Yale, discovered gunpowder could be exploded while underwater. In 1777, a portion of the British fleet was stationed at the Delaware River off Philadelphia. Bushnell was authorized by General George Washington to attempt to destroy some of them by the use of the newly invented sea mine. The mine consisted of a charge of gunpowder in a keg, which was supported by a float on the surface. In the keg with the gunpowder was a gunlock rigged, so that light impact would release the hammer of the gunlock and explode the gunpowder. Although the device failed to damage any British ships, the invention sparked considerable excitement among the Continental Navy and even the British.

During the Civil War, the Confederates used mines that ultimately sank a good number of Union vessels, and in World War I, they were used to restrict German submarines to the North Sea. In World War II, mines were used extensively to starve the Japanese economy. U.S. aircraft laid more than 12,000 mines in Japanese shipping routes and harbor approaches, sinking roughly 650 Japanese ships and disrupting all of their maritime shipping.

There are three different types of mines. Drifting mines are placed in the water and move with the current. Moored mines are free to move, but are restricted within the limits permitted by a rope and anchor that is attached to the mine. Bottom mines are not expected to move at all. Mines also differ in the way they are designed to be laid. Early on, most mines were laid from surface vessels that were carried on special tracks. Beginning in World War I, submarines started laying mines, and in World War II, aircraft laid mines in great numbers. Mines can also be modified to be laid by PT boats. Mines also differ in how they detonate. Contact mines require contact by a vessel for them to explode. Influence mines are detonated by the presence of a ship─be it magnetic, acoustic, or pressure. Controlled mines are detonated from a shore station and are designed to be either be offensive or defensive. Until World War II, mines were generally considered defensive in nature to prevent the enemy from accessing certain areas, but during the war, thousands were laid in enemy waters as an offensive weapon.

Mine countermeasures are also an important element of naval mine warfare. For instance a minefield—a large amount of mines in one area—can be neutralized by two surface ships, at a safe distance apart, dragging a cable across the minefield that cuts the mooring cable of the mines and then they are detonated at a safe distance away by the use of gunfire. Bottom mines can be detonated by artificially using an influence that is designed to mimic a ship’s presence, which is used to “trick” the mine into detonation. Mine countermeasures are commonly referred to as minesweeping.

Today, the U.S. Navy has two different types of mines in-service—the Quickstrike mine (Marks 62, 63 and 65) and the Submarine Launched Mobile Mine (SLMM) (Mark 67). The Quickstrike family of mines are used in shallow waters and are designed for use against surface and subsurface craft. They are laid by aircraft. The SLMM was developed as a submarine-deployed mine for use in areas that are inaccessible for other mine-deploying techniques, usually in hostile areas. The SLMM is also for use in shallow waters and is equipped with MK37 torpedo with a mine target detection device. Mine counter-measures today use a myriad of modern technology such as unmanned systems, sonar, and advanced weaponry. 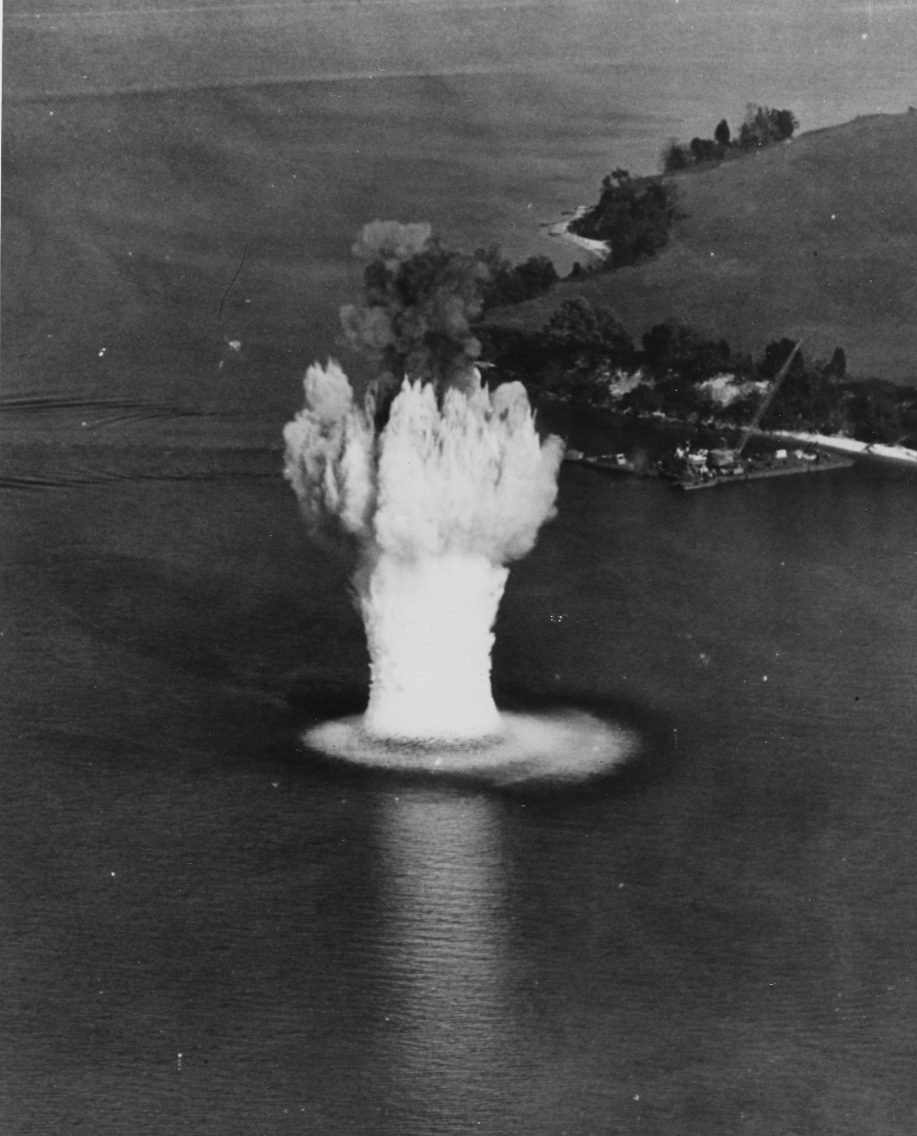 Explosion of a 500-pound underwater charge, in a test, at the Mine Warfare Test Station, Patuxent River, Maryland, circa 1950. Depth not given. This view shows the water being forced up by the explosion. National Archives photograph, 80-G-702740. 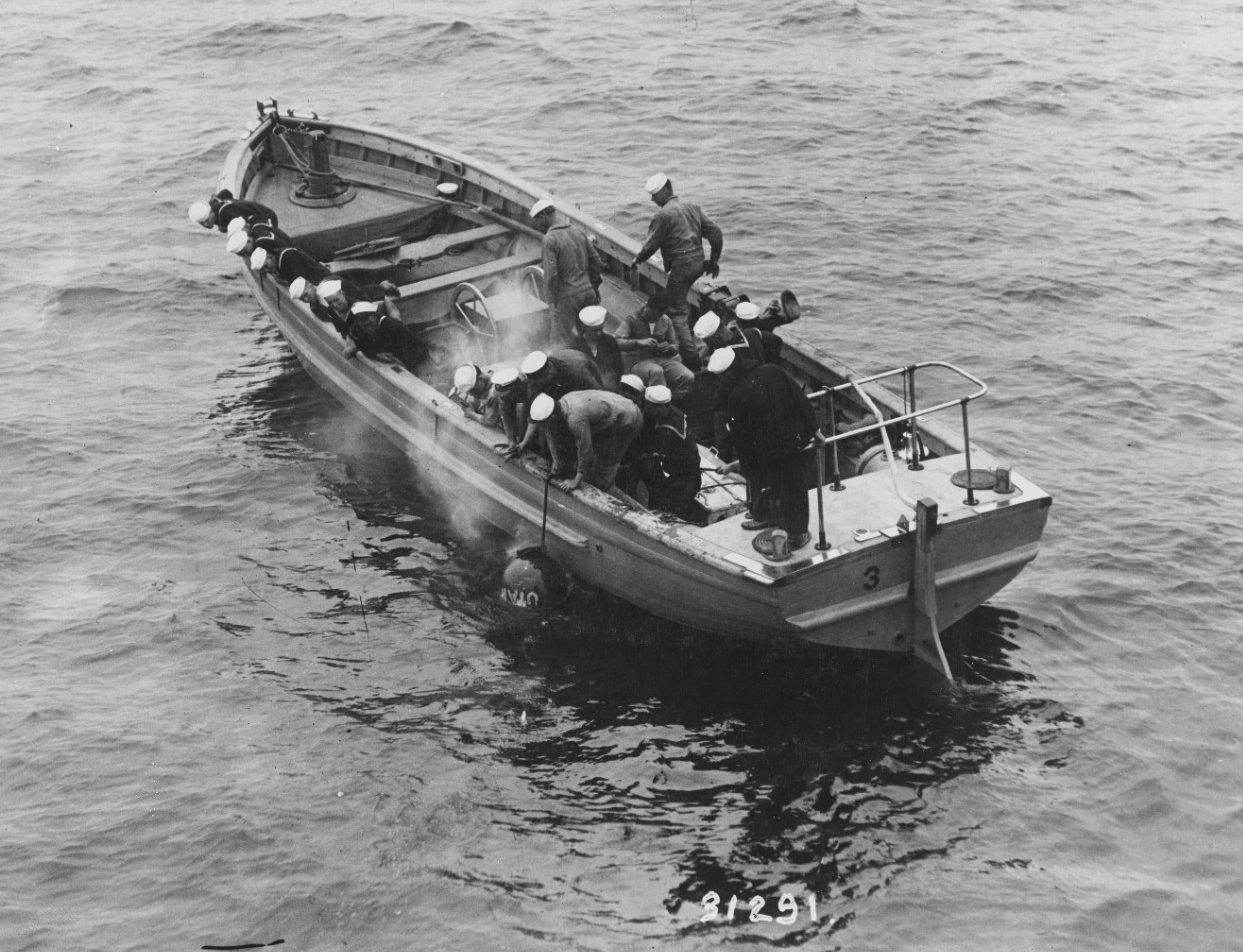 Mine laying crew of USS Utah raising mine that had been planted for practice. Naval History and Heritage Command photograph, NH 123948. 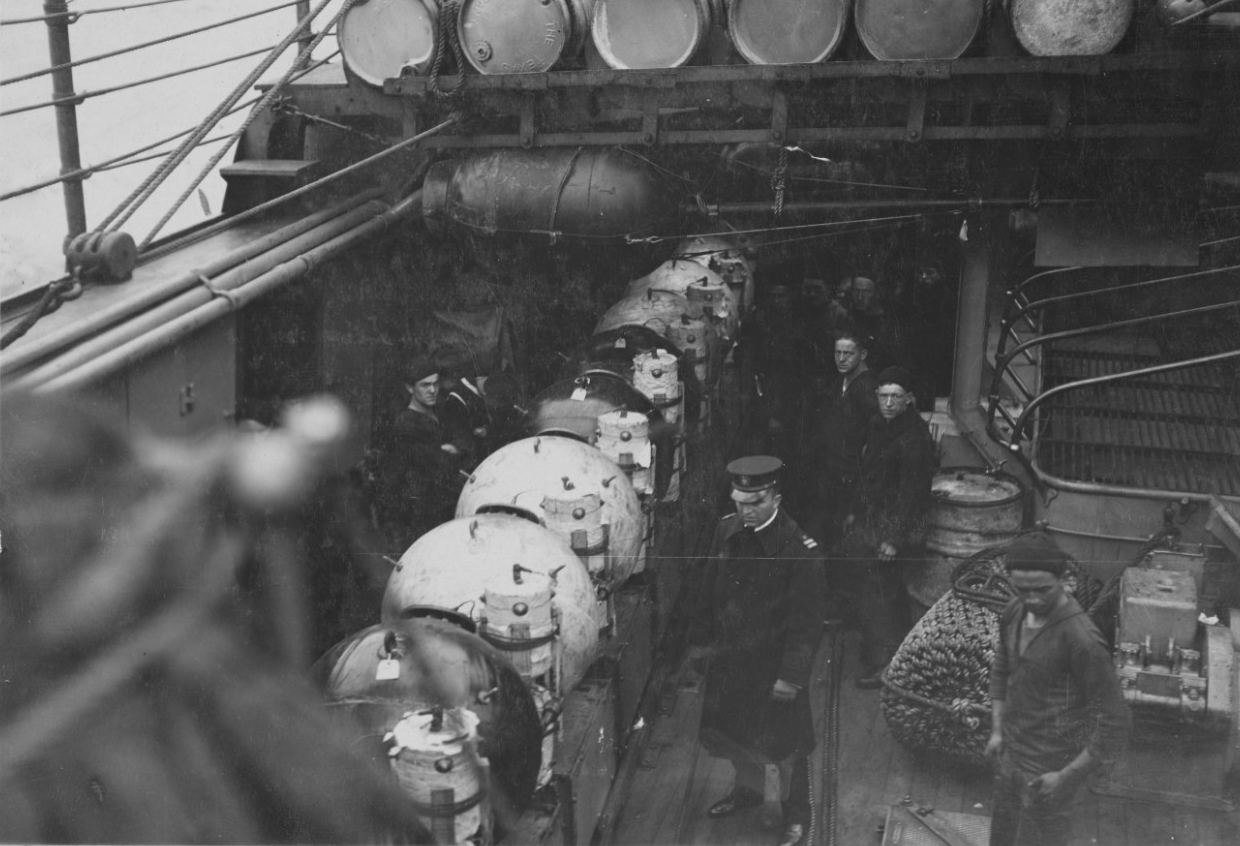 Steam winches are used to haul trains or fleets of 20 to 40 mines each, aft to the feeding section. There the mines are seized by gangs of four men, who push each mine in turn up to the trap at the stern of the ship. Each time the trap is released to go overboard. Above the mines are a marker buoy used by the mine squadron to mark the end of a minefield when it was intended to resume that line on a subsequent expedition. Naval History and Heritage Command photograph, NH 123953. 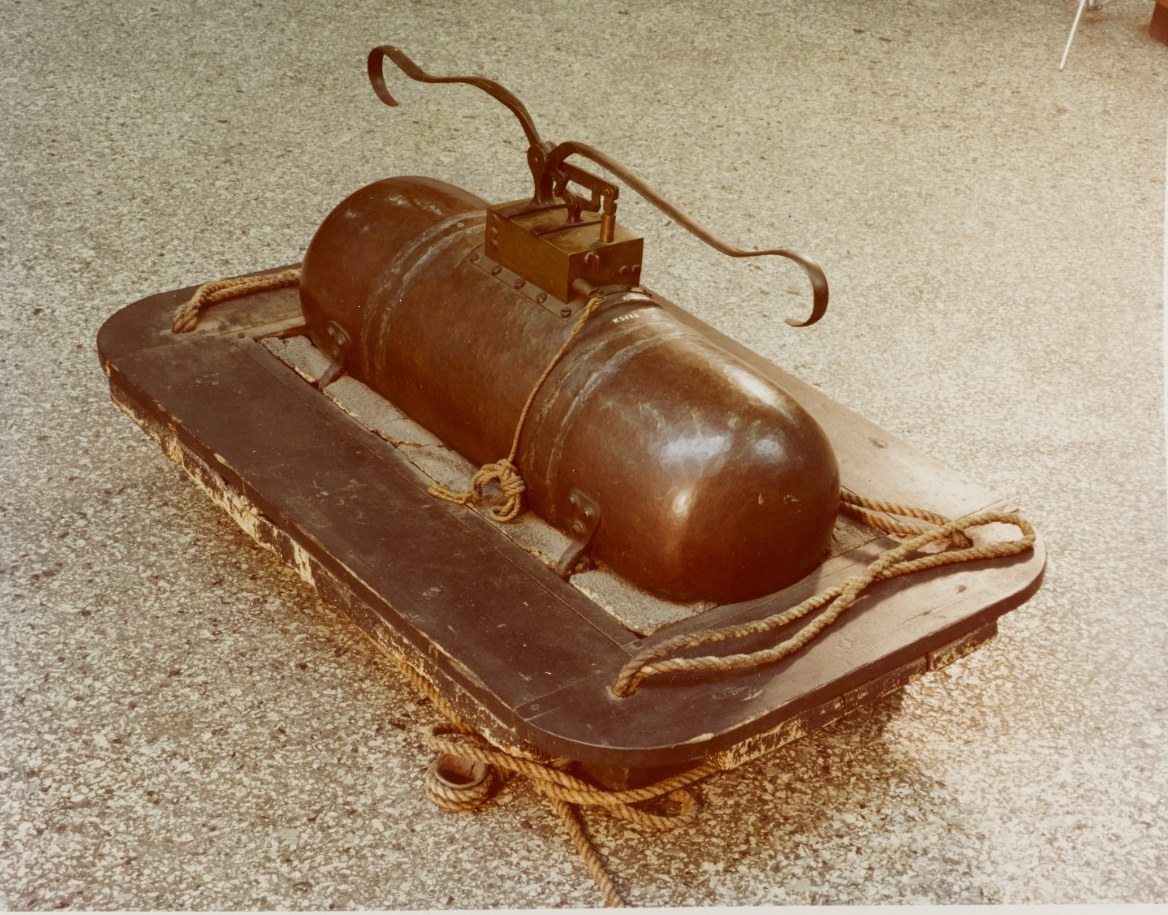 Model of underwater mine made in Sweden, based on designs of Robert Fulton. During a visit to the U.S. in 1818, Swedish Lt. Col. Kinckowstrom studied Fulton's experiments with this type of mine. His reports are preserved in Swedish Archives and provided technical data for the manufacture of these mines in Sweden. Naval History and Heritage Command photograph, NH 85684-KN. 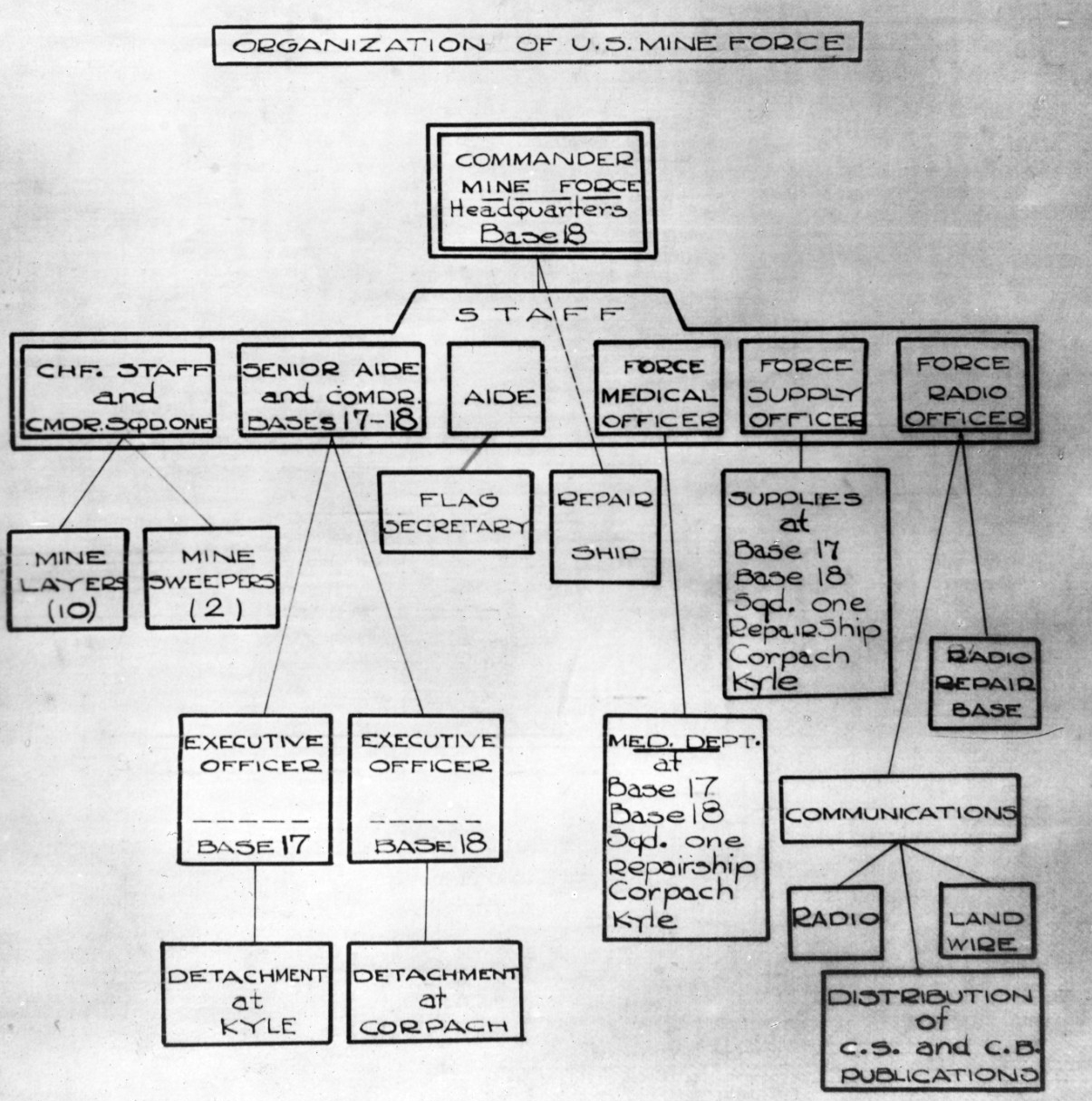 U.S. Navy Mine Force, English waters, World War I organization chart, circa 1918, during the period of planting the North Sea mine barrage. Naval History and Heritage Command photograph, NH 2588. 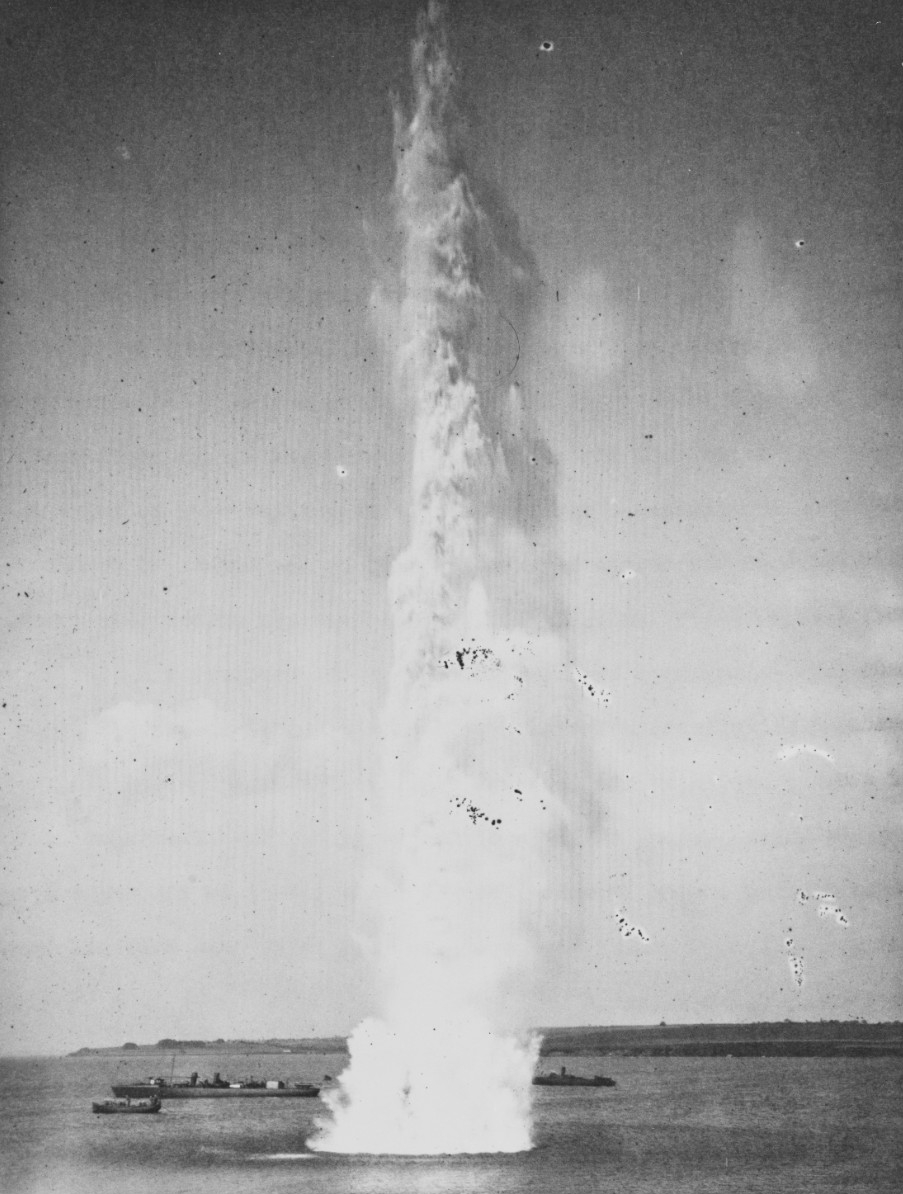 Explosion of a naval defense mine, 1907, near the Newport Torpedo Station, Rhode Island. This mine contained 161 lbs. of wet gun cotton and was submerged 8 feet underwater. Ship at left is USS Morris (TB-14). Naval History and Heritage Command photograph, NH 84488. 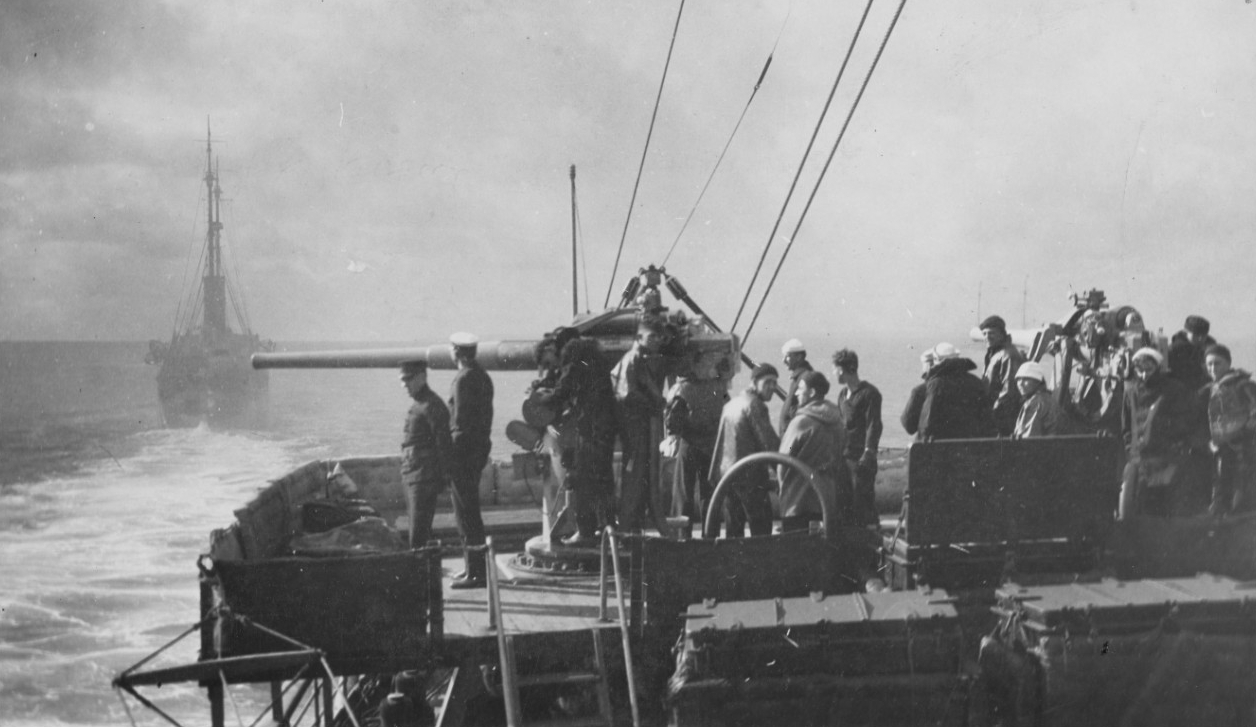 Mine layer laying a mine barrage protected by the guns of accompanying ships. Between the Orkney Islands and Norway, the U.S. Navy bottled up the waters with some 60,000 mines strewn at various points to the great discomfort of the U-boat commanders, 30 March 1919. Naval History and Heritage Command photograph, NH 123978. 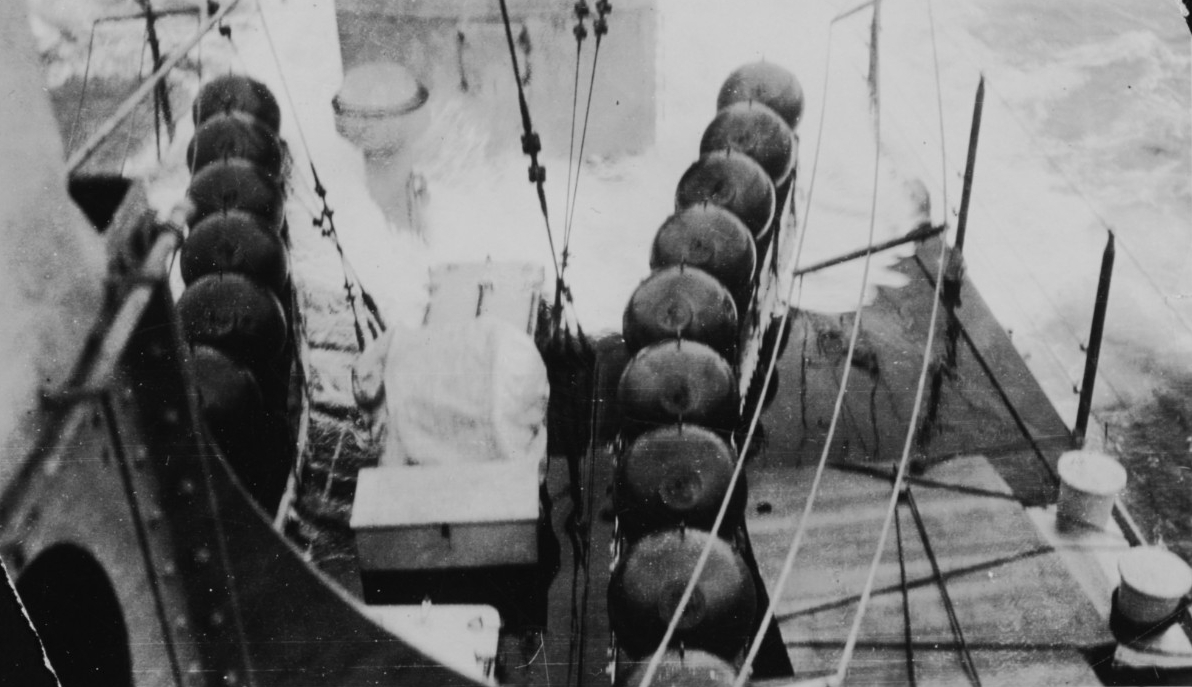 Mines on an Omaha class (CL 4-13) light cruiser taken while the ship was underway at sea, looking aft, showing the very wet conditions that were typical on these cruisers' after decks when they were operating in a seaway. Photographed circa 1923-1925, prior to the addition of a deckhouse just forward of the ships' after twin six-inch gun mount. Donation of Ronald W. Compton, from the collection of his grandfather, Chief Machinist's Mate William C. Carlson, USN. U.S. Naval History and Heritage Command photograph, NH 99637. 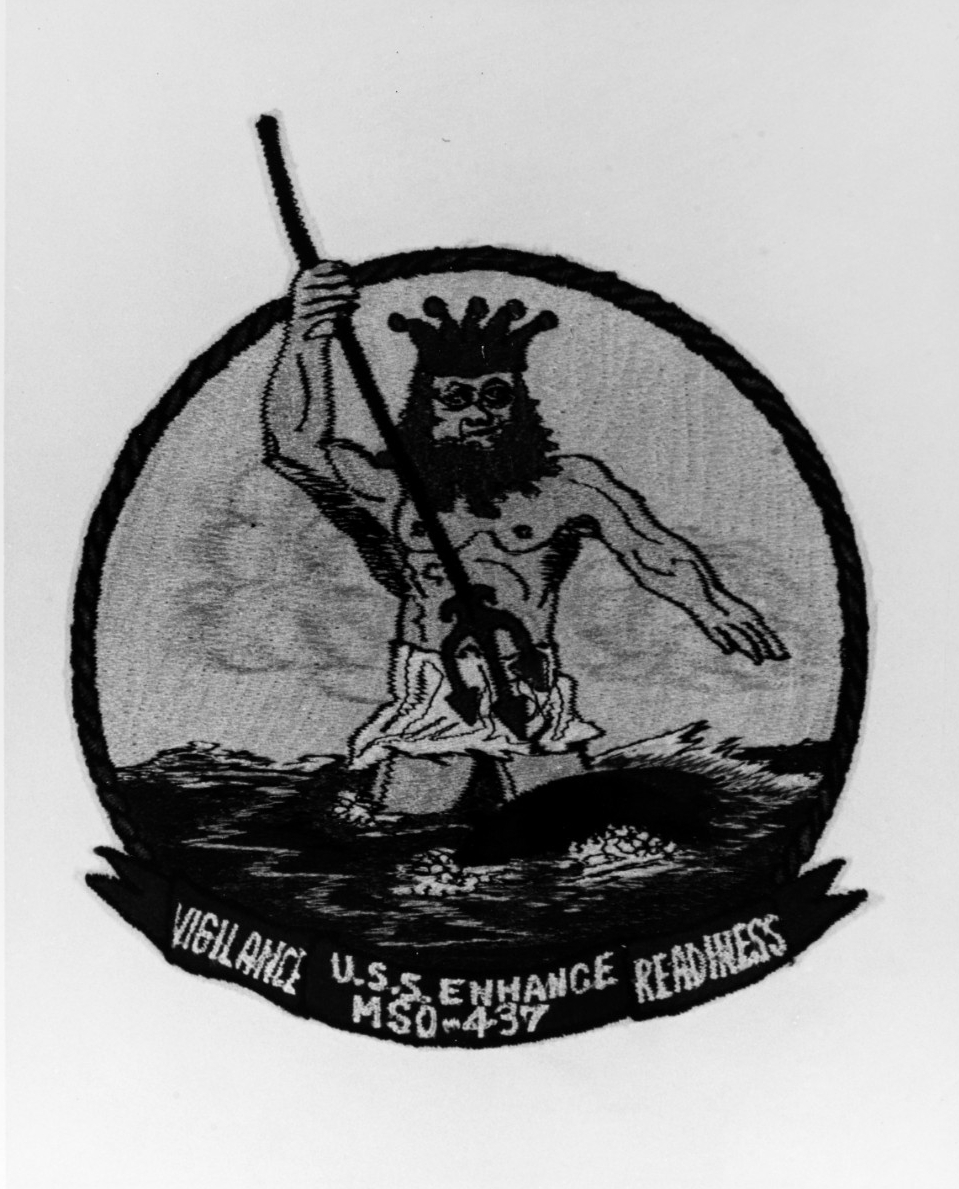 This insignia was adopted in 1961 as the result of a contest held among the crew of USS Enhance (MSO-437). The figure of Neptune spearing a mine, and the motto "Vigilance-Readiness," are representative of the capabilities and aspirations of the mine force to rid the seas of enemy mines, wherever and whenever encountered. Date of Photo: 1968. Naval History and Heritage Command photograph, NH 65272-KN.