Share
Connect
Manuscripts
»
B
»
Certificate of Enrollment in the Mine Force, U.S. Atlantic Fleet to Admiral Arleigh Burke

Certificate of Enrollment in the Mine Force, U.S. Atlantic Fleet to Admiral Arleigh Burke 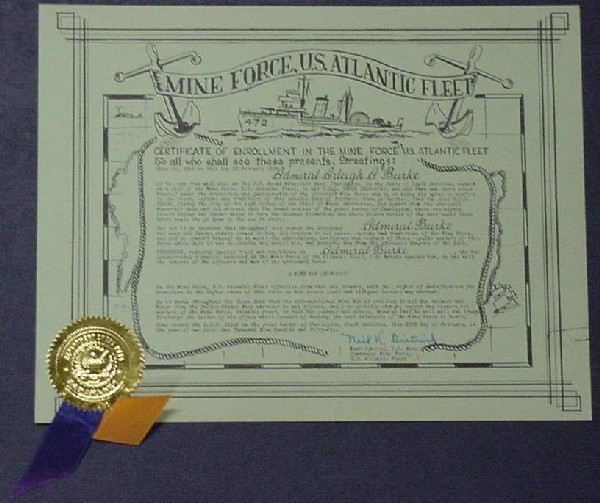 Certificate of enrollment in the Mine Force U.S. Atlantic Fleet
to all who shall see these presents, Greetings:

Know ye, that on this day of 25 February 1956
Admiral Arleigh A. Burke
of his own free will did, at the U.S. Naval Minecraft Base, Charleston, in the State of South Carolina, embark
in a ship of the Mine Force, U.S. Atlantic Fleet, to wit U.S.S. Valor (MSO-472), and did then and there place
himself under the protection and guardianship of the aforesaid Mine Force and in so doing did agree to conform
to the rules, customs and traditions of this exalted Band of Brothers. Know ye further, that the said U.S.S.Valor, flying the flag of the high office of the Chief of Naval Operations, did depart from the aforesaid
Minecraft Base and did proceed into the broad reaches of the great harbor of Charleston, where the mighty
rivers Ashley and Cooper unite to form the Oceanus Atlanticus and where divers perils of the deep await those
hardy souls who go down to the sea in ships.

And let it be recorded that throughout this voyage the aforesaid Admiral Burke
did obey all lawful orders issued to him, did conform to all rules, customs and traditions of the Mine Force,
and did so comport himself as to merit the approbation, confidence and respect of those regular members of this
Force whose duty it was to observe and assist him, and preserve him from the aforesaid dangers of the deep.

Therefore, reposing special trust and confidence in Admiral Burke, who has
demonstrated a special interest, in the Mine Force of the Atlantic Fleet, I do hereby appoint him, by and with
the consent of the officers and men of the aforesaid Force

A Mine Man (Honorary)

in the Mine Force, U.S. Atlantic Fleet effective from this day forward, with full rights of qualification for
promotion to the higher ranks of this Force as his future loyal and diligent service may warrant.

Be it known throughout the Seven Seas that the aforementioned Mine Man is entitled to all due respect and
honor from the United States Navy wherever he may proceed, and I do strictly charge, enjoin and require all
members of the Mine Force, Atlantic Fleet, to heed his counsel and advice, knowing that he will well and truely
discharge the duties of his office which consist of keeping the best interests of the Mine Force at heart.

Done aboard the U.S.S. Valor in the great harbor of Charleston, South Carolina, this 25th day of February, in
the year of our Lord, One thousand Nine Hundred and Fifty-Six.