For extraordinary heroism and outstanding performance of duty during operations against enemy forces in the Republic of Vietnam from 6 December 1968 to 31 March 1969. Conducting devastating raids into enemy strongholds and sanctuaries located in and about river mouths, inlets, coves and canals of coastal South Vietnam, men of SWIFT RAIDER forces were highly successful in harassing and severing enemy lines of supply and communications. The lightning attacks carried out by SWIFT RAIDER units confronted hostile forces in the most serious challenge for control of IV Corps and the Cua Dai River in the history of the Vietnamese conflict. Time and again, friendly patrol craft on swift and daring raids penetrated enemy strongholds in the face of concentrated hostile fire to inflict extensive personnel and material casualties. Enemy vessels were intercepted and destroyed, thus denying him freedom of waterways he formerly controlled. By their outstanding courage, professionalism, and inspiring dedication throughout this period, the officers and men of the units of Task Force 115 participating in Operation SWIFT RAIDER reflected great credit upon themselves and upheld the highest traditions of the United States Naval Service. 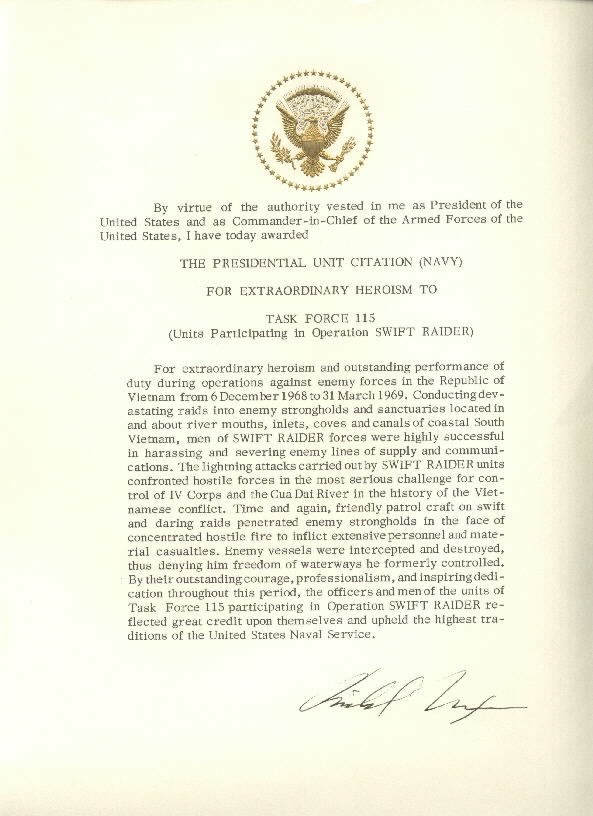