Three autographed letters signed by Elisha Harsen from the U.S. steamer Mahaska and the frigate Wabash. 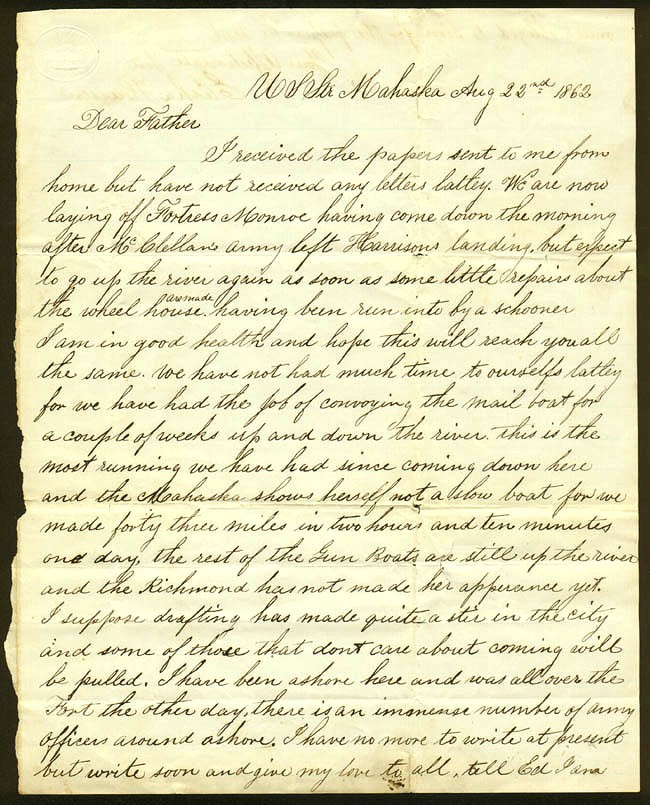 US Str Mahaska Aug 22nd 1862
Dear Father
I received the papers sent to me from
home but have not received any letters latley [sic]. We are now
laying off Fortress Monroe having come down the morning
after McClellan's army left Harrisons landing, but expect
to go up the river again as soon as some little repairs about
the wheel house are made having been run into by a schooner
I am in good health and hope this will reach you all
the same. We have not had much time to ourselfs latley [sic]
for we have had the job of convoying the mail boat for
a couple of weeks up and down the river. [T]his is the
most running we have had since coming down here
and the Mahaska shows herself not a slow boat for we
made forty three miles in two hours and ten minutes
one day, the rest of the Gun Boats are still up the river
and the Richmond has not made it her apperance[sic] yet.
I suppose drafting has made quite a stir in the city
and some of those that dont care about coming will
be pulled. I have been ashore here and was all over the
Fort the other day, there is an immense number of army
officers around ashore. I have no more to write at present
but write soon and give my love to all, tell Ed I am

much obliged to him for the papers he sent.
Your Affectionate Son
Elisha Harsen 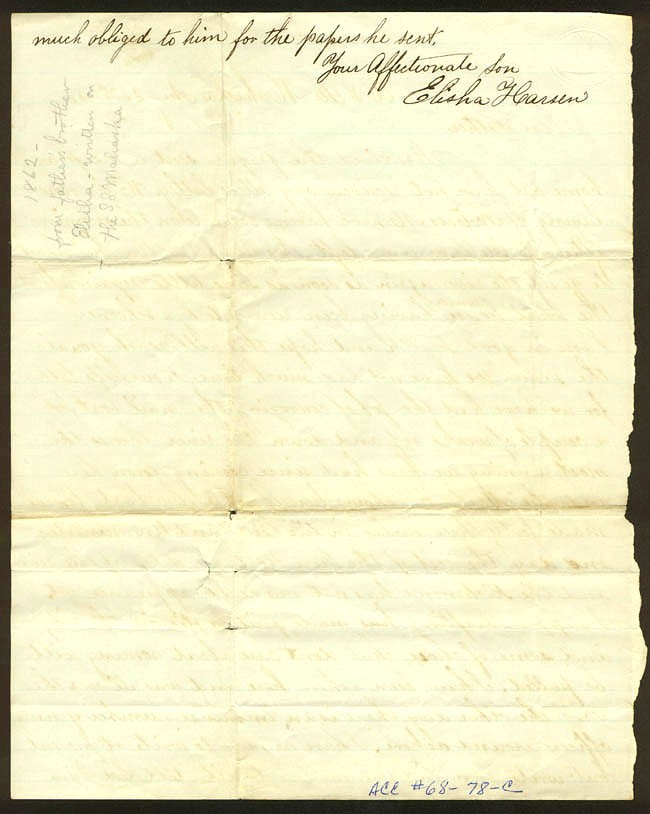 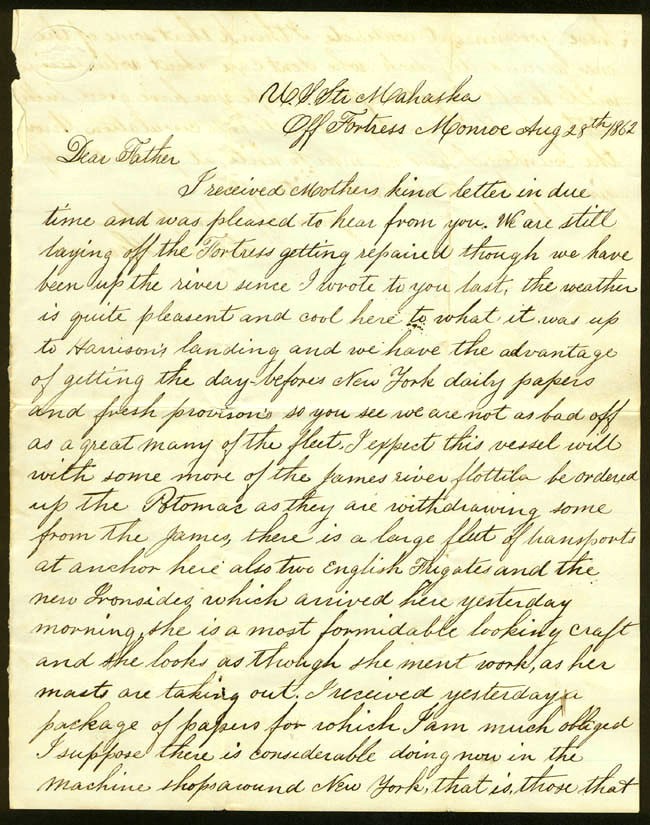 USS Mahaska
Off Fortress Monroe Aug 28th 1862
Dear Father
I received Mothers kind letter in due
time and was pleased to hear from you. We are still
laying off the Fortress getting repaired though we have
been up the river since I wrote to you last, the weather
is quite pleasant and cool here to what it was up
to Harrison's landing and we have the advantage
of getting the day before's New York daily papers
and fresh provision's so you see we are not as bad off
as a great many of the fleet. I expect this vessel will
with some more of the James river flottila be ordered
up the Potomac as they are withdrawing some
from the James, there is a large fleet of transports
at anchor here also two English Frigates and the
new Ironsides which arrived here yesterday
morning, she is a most formidable looking craft
and she looks as though she ment [sic] work, as her
masts are taking out. I received yesterday
a package of papers for which I am much obliged.
I suppose there is considerable doing now in the
machine shops around New York, that is, those that 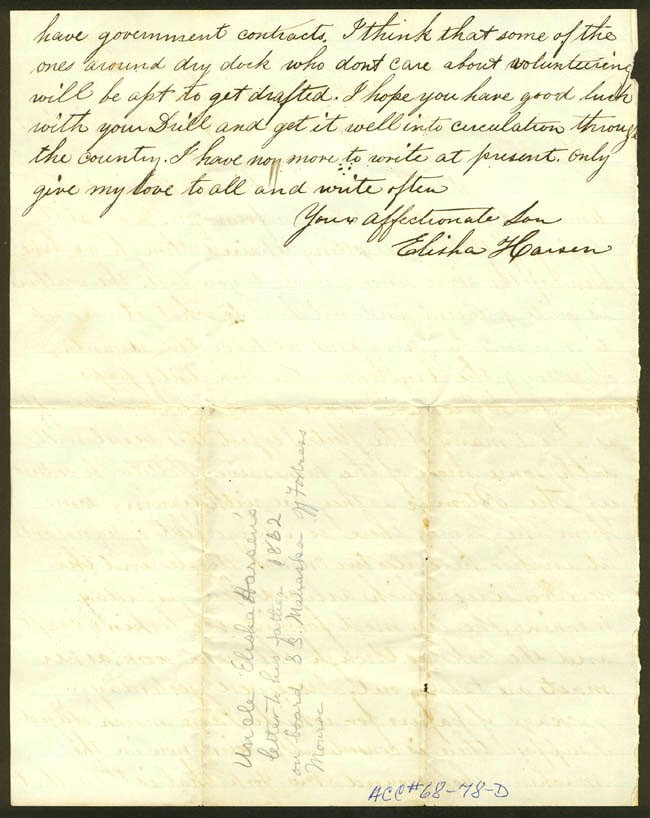 have government contracts. I think that some of the
ones around dry dock who don't care about volunteering
will be apt to get drafted. I hope you have good luck
with your Drill and get it well into circulation through
the country. I have no more to write at present, only
give my love to all and write often.
Your affectionate Son
Elisha Harsen

[Written in pencil accross the back of the letter: Uncle Elisha Harsen's letter to his father 1862 on board SS Mahaska off Fortress Monroe] 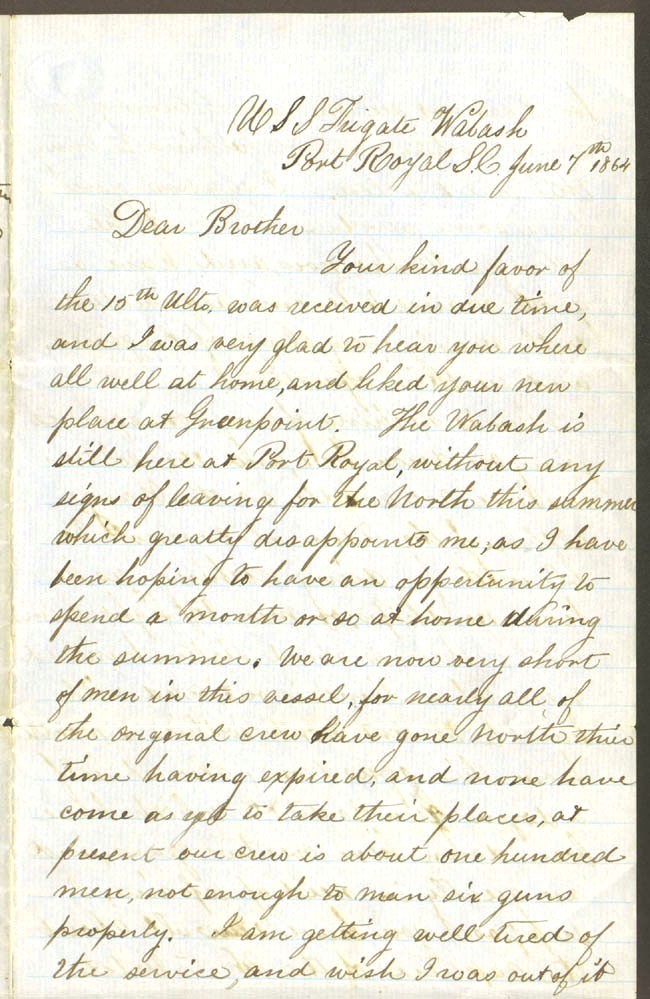 USS Frigate Wabash
Port Royal S.C. June 7th 1864
Dear Brother
Your kind favor of
the 15th Ulto. was received in due time,
and I was very glad to hear you where [sic]
all well at home, and liked your new
place at Greenpoint. The Wabash is
still here at Port Royal, without any
signs of leaving for the north this summer
which greatly disappoints me, as I have
been hoping to have an oppertunity [sic] to
spend a month or so at home during
the summer. We are now very short
of men in this vessel, for nearly all of
the original crew have gone north their
time having expired, and none have come
as yet to take their places, at
present our crew is about one hundred
men, not enough to man six guns
properly. I am getting well tired of
the service, and wish I was out of it 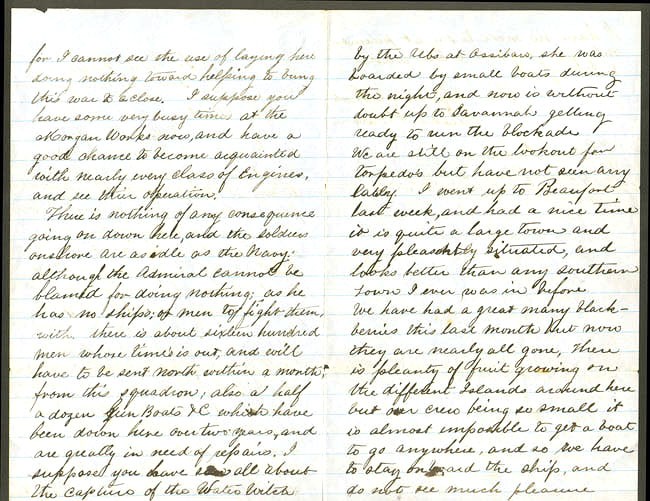 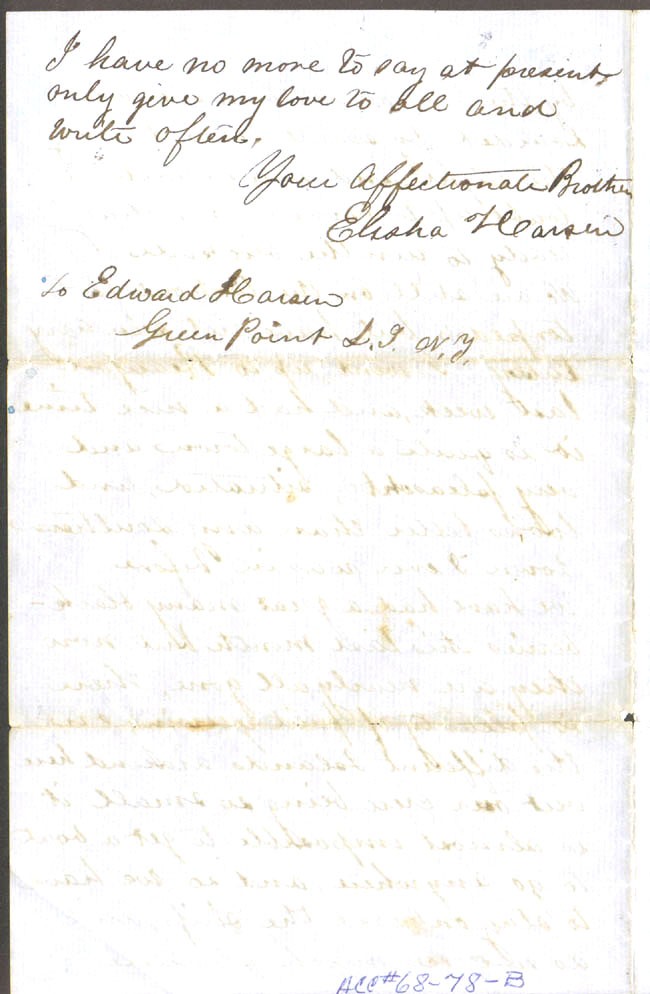 [Page 4]
I have no more to say at present
only give my love to all and
write often.
Your Affectionate Brother
Elisha Harsen
To Edward Harsen
Green Point, L.I.N.Y.