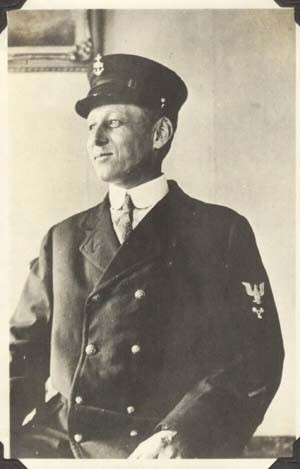 On 5 December 1917, Rose along with ten other machinists working at the torpedo factory volunteered for "Duty for Torpedo Overhaul and Repair for the Navy, operating in European waters," under the condition that they would have to enlist in the Navy. Rose was officially sworn in on 13 December and assigned the rating of Chief Special Mechanic (CSM). The CSM rating was a new one created by Congress to obtain various technical specialists needed by the Navy in World War I.

Rose left Newport on 17 December 1917, traveled to New York City by steamer with the rest of his party, sailed to Europe on the steamship St. Louis on 19 December, and arrived at Liverpool nine days later. He reached Queenstown on 30 December and began work at the United States Navy's Torpedo Repair Station, Base Six located on Haulbowline Island on 3 January 1918. He continued to work at the station through December 1918. In January he sailed for home on board the Melville, which departed Southampton on 8 January 1919 enroute to New York City via Bermuda, West Indies.Melville dropped anchor in New York Harbor on 25 January 1919.

Rose stayed with the ship until he was discharged by special order from the Secretary of the Navy on 24 February 1919 under the condition that he immediately return to work at the United States Naval Torpedo Station in Newport, Rhode Island.. He reported there on 1 March 1919 and requested thirty days leave, which was granted. Rose remained at the Torpedo Station until November 1919, when he was transferred at his request to the he United States Naval Torpedo Station at Alexandria, Virginia, which had just opened for business. He continued to work there until June 1923, when he resigned.

The bulk of the collection is arranged by subject in individual folders arranged in a standard archival box. The mechanic's notebooks are housed separately in a small box.

Base Six Diary, 1908-1919
Ninety-nine page type written manuscript documenting Rose's training as a machinist, his employment at the United States Naval Torpedo Factory in Newport, Rhode Island, and his subsequent enlistment in the Navy and his assignment to the United States Torpedo Repair Station, Base Six, Haulbowline Island, Queenstown, Northern Ireland. The manuscript contains a rich description of the travel and living conditions encountered by Rose during his journey to the repair station, the living conditions in and around Haulbowline Island, and the work that he was engaged in while there.

Alexandria Torpedo Station Diary, 1919-1923
A sequel to Rose's Base Six Diary containing a detailed description of his experiences while employed at the United States Torpedo Factory, Alexandria, Virginia from October 1919 through its closing at the end of 1923. Includes background information about those with whom he worked: Jere Reeves, Alex Carnahan, and Francis A. Hobart.

Station Record Book (Haulbowline) Base Six, 1918
Ledger containing a record of the work done on torpedoes from 31 May 1918 to 23 November 1918 (pages 2-17). Included in the remaining pages are copies of various documents concerning the station and its operation written in Mr. Rose's hand that appear to have been added at a later date.

Base Six Post Card Index
Detailed descriptive index of 70 photographic post cards (Note some post cards can be found in Rose's photographic collection listed in the Related Collections section of this finding aid.).

"The Irish-American Port"
Five-page type written manuscript providing details about the facilities and operation of the American naval base at Queenstown, Northern Ireland.

- Ration Card issued to Frand Rose for weekly purchase of 2 pounds of sugar.

"Pictures of the Past"
Poem written by Frank Rose about "The Yankee Fleet in Queenstown Bay."

Worlds Work Articles
Articles on the Navy and Naval Operations during World War I taken from the magazine World's Work..

Manuscripts are unavailable for loan and must be consulted in the library. Photocopying of manuscripts is generally prohibited, though the use of digital cameras by researchers to reproduce non-copyrighted materials is permitted. Permission to photocopy a limited number of pages may be granted by the reference staff, contingent upon the physical state of items. All photocopying of materials shall be done by the reference staff, or under their close supervision. The use of personal scanners by non-library staff personnel must be approved by the reference staff on a document-by-document basis (Reference: Naval History and Heritage Command Instruction [NAVHISTCENTINST] 5070.1C.).

The collection was processed and a finding aid prepared by Thomas Wildenberg in March 2007.