Images from His Collection at the Navy Department Library 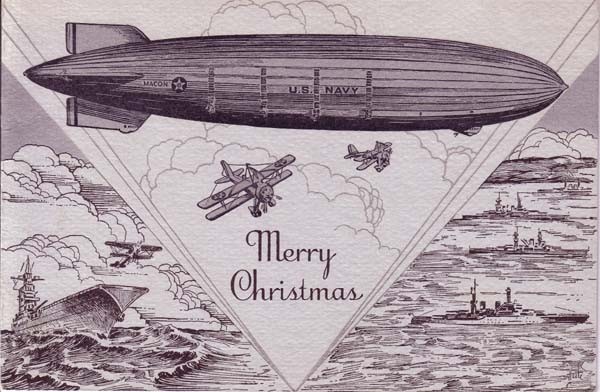 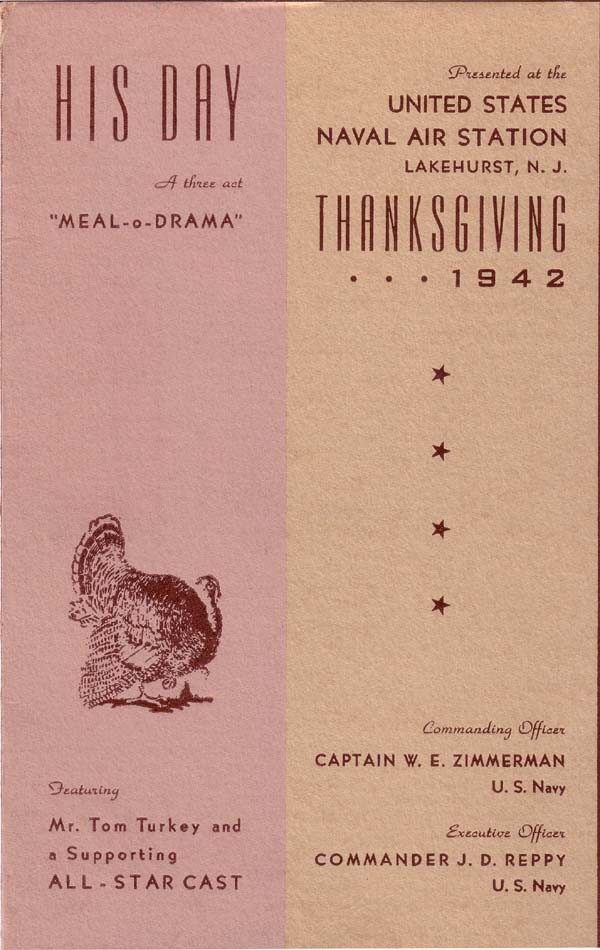 IN CHARGE OF PRODUCTION

A WORD ABOUT THE PLOT

This play concerns Mr. Tom (Corn-Fed) Turkey, a big feather and duster man from
the "wide open spaces." In line with the increased naval expansion program -- this
delectable character and his gang decided to visit the United States Naval Air Station,
Lakehurst, NJ, this Thanksgiving Day to be "stowed away" for a short hop.

The scene of action is the USNAS, Lakehurst, NJ, on Thanksgiving Day, at high noon.
An enthusiastic committee, (all hands), welcome "Tommy" and "His Gang" aboard, with
knives and forks at "Present Arms!" . . . . Now the fun begins!

The various members of the cast are listed in the order that they come over the gangway.
If our star appears a bit uneasy, the management knows that our audience will not judge
him to harshly . . . . . . . Let's go on with the show!

"Celery Soup and Crackers," a Symphony, sung by the entire audience, without silencers.
. . . . Let joy be unconfined!

Mr. See Pickles and his sweetheart, Miss Celery Hearts, who is is well stuffed -- Relished
by all. Followed by a solo by that appetizing California celebrity .......... Miss Ripe Olives.

Upon arriving at this point our audience will find it advisable to take time out for a short
period before attempting Act III.

A Siesta is now in order. "All Hands," not on watch, to their bunks until
the effects of the play have partially subsided.

WE HOPE YOU LIKED IT

Statement of E. R Morris, AMM 1/c on the Loss of the USS Macon

At the work "emergency landing stations," I went to my station 125 starboard (No. 7 engine unit). Hall F 3/c was on watch in the engine room at the time.  Muller, ACMM was also there.  Mr. Thurman was standing in the keel near the unit.  Water temperature of engine was as high as the gauge would register.  Mr. Thurman asked me if there was any water left in the reserve tank.  I told him I thought there was, at that time we noticed water leaking from a hole in bottom of the tank. I brought friction tape and piece of rubber from engine room with assistance of Mr. Thruman, we stopped the leak. Ship was rising nose up, must have been at an angle of 35 or 40 degrees, in a heavy fog or clouds.  Mr. Thurman who was then on the phone at frame 136 starboard -- altimeter read 4000 feet -- told me to go to each engine room on that side and tell them to throw over the side all weight that could be moved.  I carried this out and when I came back, ship was almost level.  Mr. Thurmon said, "We must keep the engines going.  I went into the engine room, water temperature was down to 95 degrees C.  Hall was still in the engine room.  Mr. Thurman came and told me to tell each engine room to be ready to abandon ship.  I carried this out.  When I came back, I looked through open pressure hatch just aft of No. 7 unit and water seemed to be very close.  I then felt a jar and heard a crash, which must have been the tail hitting the water.  I stopped at No. 7 unit.  Hall was in outrigger doorway looking down, evidently getting ready to jump.  I went forward to hatchway at frame 147.5 starboard.  Mr Rippy, Mr. Thurman, Mr Buckley and Davis, CPM were there, a life raft had been dropped and someone had just jumped.  Mr. Rippy said, "I think there is still a life raft in the nose and started that way.  I followed him to the nose.  There were about 12 or 15 other men there, as far as I could make out.  Ship aft of the control car was under water.  We were in a nose up position, seemed to remain stationary for some time.  When the last gas cell blew out we settled some and girders underneath us started to buckle and snap.  We moved outside onto the cover to escape the gas fumes.  The life raft had been lowered just previous to the gas cell bursting.  A few minutes after the cell burst we went into the water and made for the life raft and stayed with it until the Richmond's motor launch picked us up.  I did not notice the time during any of the proceedings.