Asa Curtis proof of US Citizenship

DS dated 2 October 1822. To provide proof of US citizenship signed by John Steele, Collector of the District of Philadelphia. 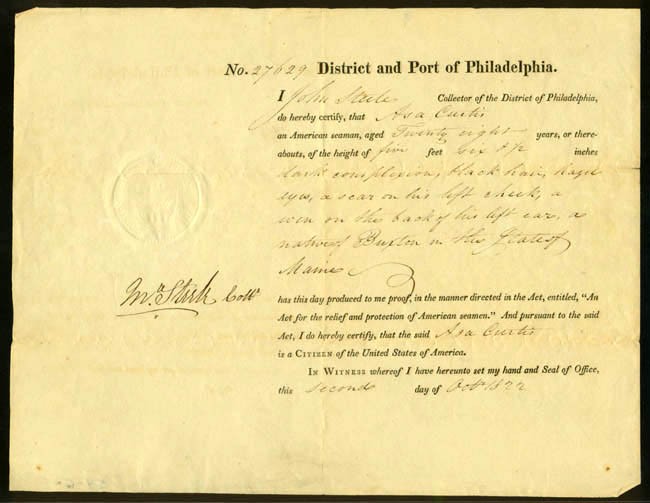 No.27629 District and Port of Philadelphia

I John Steele Collector of the District of Philadelphia,
do hereby certify, that Asa Curtis
an American seaman, aged Twenty eight years, or there-
abouts, of the height of five feet six and ½ inches
dark complexion, black hair, hazel
eyes, a scar on his left cheek, a
nick on the back of his left ear, as
native of Buxton in the State of
Maine

has this day produced to me proof, in the manner directed in the Act, entitled, “An
Act for the relief and protection of American seamen.” And pursuant to the said
Act, I do hereby certify, that the said Asa Curtis
is a CITIZEN of the United States of America.
In WITNESS whereof I have hereunto set my hand and Seal of Office,
this second day of Oct 1822
Mr. J Steele Coll[ector]