Letter to his mother, dated 11 December 1941, on board the USS Pompano, assuring her that he and his family are well following the Japanese attack on Pearl Harbor and to keep her spirits up. This is the third attempt to write a letter,
and this time I am going to have to stick to practically nothing in the
way of news. On the other two attempts I found myself putting down
things that wouldn't meet with the Censorship requirements. So much
has happened that you would be interested in that it is hard to keep
from mentioning various incidents.

In the first place, Anne and Fran are safe. The closest thing
that fell around our house was a small bomb in Mrs. Taft's yard
across the street. I do not think that the attack will be repeated
as the element of surprise is lacking, and that was the only thing
that made the affair successful. It was a serious blow, but not at all
as bad as one might think. The main thing that worries me is that I
cannot get Fran and Anne off the island for quite some time. I can't
think of allowing them to make the hazardous trip across to the West
Coast yet. When we find out just how many subs the Japs have between
Honolulu and the Coast, we can better decide. The Navy will handle
the evacuation of the dependents, and will be careful about making the
decision.

The Navy is terribly mad about what happened last Sunday, and
there will be no prisoners in this war. The men went absolutely crazy
and horribly mutilated any of the enemy they could lay their hands on --
dead or alive. Everyone was calm, and the morale is wonderful. We
have nothing to worry about, and although the war is now going to be
a long, hard one, we will come out victorious in the end. There is no
doubt about it. The future encounters between the enemy and us will
be very much different from the one of last Sunday.

Fran is in wonderful spirits. You have never seen anyone more
calm than she is, and I am not worrying about her spirits. Anne has
not been affected, but she is very conscious of plane motors, which
surprised me quite a bit. They will be all right, I am sure.

There isn't much that I can say, dear, as I mentioned before, but
I just want to put down a few things for you to remember. In the first
place, I know that you will worry, and there is no sense in telling you
not to. Please, however, keep your worrying down to the minimum, and
take some consolation in the fact that I am not doing any myself. We
are extremely confident, and are unafraid of the damned Japs. There
are going to be very long periods of time when you not hear from
me. It may be as long as six months -- I have no way of knowing. You
can rest assured that no news is good news, as the Navy Department
handles things of that nature promptly, and the Navy Dept. knows at
all times the whereabouts of the various ships. We have a job to do,
and none of us want to shirk our duty. If you could only have the
attitude that all of us have out here. We hate those yellow rats something
fierce, and Franny is one of the chief haters. I believe that her
calm is due to her feeling regarding the Japs and the dastardly act
they committed against us. It was the lowest, most cowardly act that
has ever been directed against a civilized nation. They will pay
plenty. [end of page one] 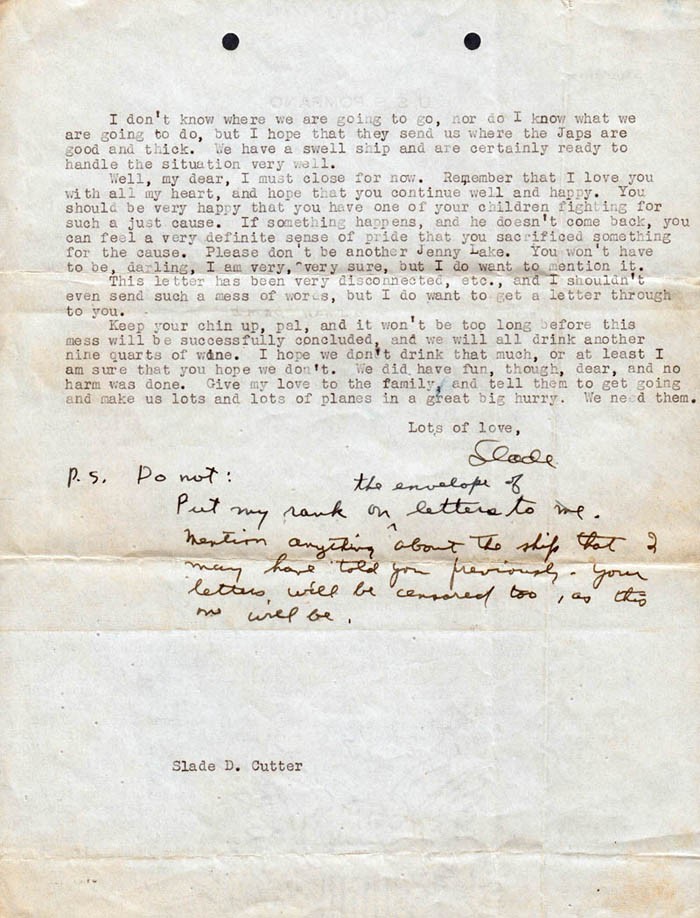 I don't know where we are going to go, nor do I know what we
are going to do, but I hope that they send us where the Japs are
good and thick. We have a swell ship and are certainly ready to
handle the situation very well.

Well, my dear, I must close for now. Remember that I love you
with all my heart, and hope that you continue well and happy. You
should be very happy that you have one of your children fighting for
such a just cause. If something happens, and he doesn't come back, you
can fell a very definite sense of pride that you sacrificed something
for the cause. Please don't be another Jenny Lake. You don't have
to be, darling, I am very sure, but I do want to mention it.

This letter has been very disconnected, etc., and I shouldn't
even send such a mess of words, but I do want to get a letter through
to you.

Keep your chin up, pal, and it won't be too long before this
mess will be successfully concluded, and we will all drink another
nine quarts of wine. I hope we don't drink that much, or at least I
am sure that you hope we don't. We did have fun, though, dear, and no
harm was done. Give my love to the family, and tell them to get going
and make us lots and lots of planes in a great big hurry, We need them.

[Handwritten] P.S. Do not:
Put my rank on the envelope of the letter to me.
Mention anything about the ship that I
may have told you previously. Your
letters will be censored too, as this
one will be.