We thank Ms. Ruth Thomas for her generous donation of this diary.

Biographical Sketch: Rear Admiral Charles Mitchell Thomas graduated from the US Naval Academy on 26 September 1865. He commanded the USS Bennington, 1893–1895, USS Lancaster, 1899, USS Brooklyn and USS Oregon, 1900–1902, and Receiving Ship Franklin, 1902–1904. He was Commandant, Naval Training Station, Newport, Rhode Island, 1904–1905, and Superintendent, Naval Training Station, 1905–1907. He commanded the Second Division of the Atlantic Fleet from January–August 1907 and commanded the entire “Great White Fleet” during the illness of Rear Admiral Robley D. Evans from February–May 1908. He died at Delmonte, California, in July 1908.

Scope and Content: Rear Admiral Thomas’s diary runs from 16 December 1907 through 22 March 1908, while Thomas was on board the Second Squadron flagship USS Minnesota. It includes an account of part of the time period when Thomas was Commander-in-Chief of the US Atlantic Fleet (February–May 1908). The first 92 and ½ pages are typewritten, while pages 94–173 are handwritten. 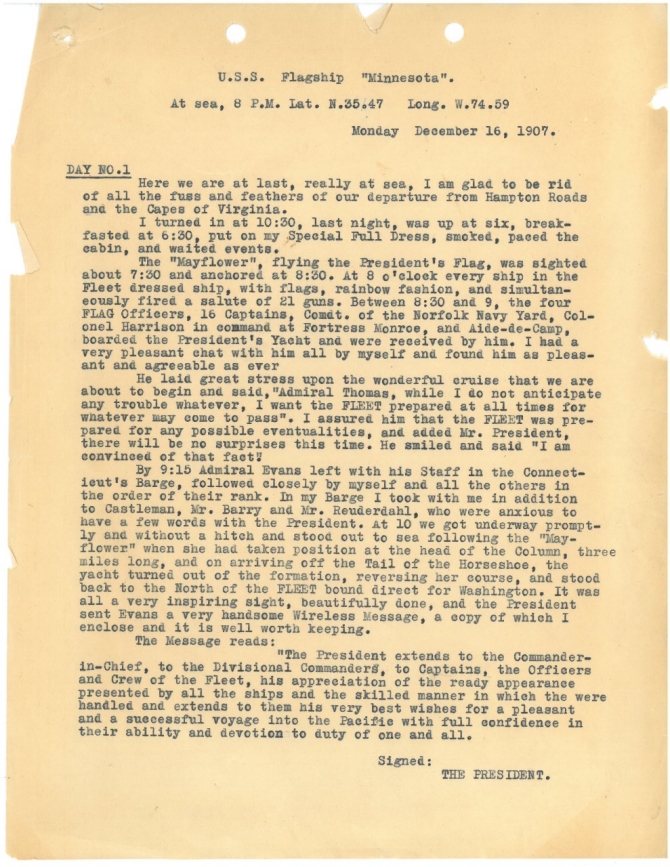 Here we are at last, really at sea, I am glad to be rid of all the fuss and feathers of our departure from Hampton Roads and the Capes of Virginia.

The “Mayflower”, flying the President’s Flag, was sighted about 7:30 and anchored at 8:30. At 8 o’clock every ship in the Fleet dressed ship, with flags, rainbow fashion, and simultaneously fired a salute of 21 guns. Between 8:30 and 9, the four FLAG Officers, 16 Captains, Comdt. of the Norfolk Navy Yard, Colonel Harrison in command at Fortress Monroe, and Aid-de-Camp, boarded the President’s Yacht and were received by him. I had a very pleasant chat with him all by myself and found him as pleasant and agreeable as ever.

He laid great stress upon the wonderful cruise that we are about to begin and said, “Admiral Thomas, while I do not anticipate any trouble whatever, I want the FLEET prepared at all times for whatever may come to pass”. I assured him that the FLEET was prepared for any possible casualties, and added Mr. President, there will be no surprises this time. He smiled and said “I am convinced of that fact”.

By 9:15 Admiral Evans left with his Staff in the Connecticut’s Barge, followed closely by myself and all the others in the order of their rank. In my Barge I took with me in addition to Castleman, Mr. Barry and Mr. Reuderdahl, who were anxious to have a few words with the President. At 10 we got underway promptly and without a hitch and stood out to sea following the “Mayflower” when she had taken position at the head of the Column, three miles long, and on arriving off the Tail of the Horseshoe, the yacht turned out of the formation, reversing her course, and stood back to the North of the FLEET bound direct for Washington. It was all a very inspiring sight, beautifully done, and the President sent Evans a very handsome Wireless Message, a copy of which I enclose and it is well worth keeping.

“The President extends to the Commander-in-Chief, to the Divisional Commanders, to Captains, the Officers and Crew of the Fleet, his appreciation of the ready appearance presented by all the ships and the skilled manner in which the [sic] were handled and extends to them his very best wishes for a pleasant and a successful voyage into the Pacific with full confidence in their ability and devotion to duty of one and all. 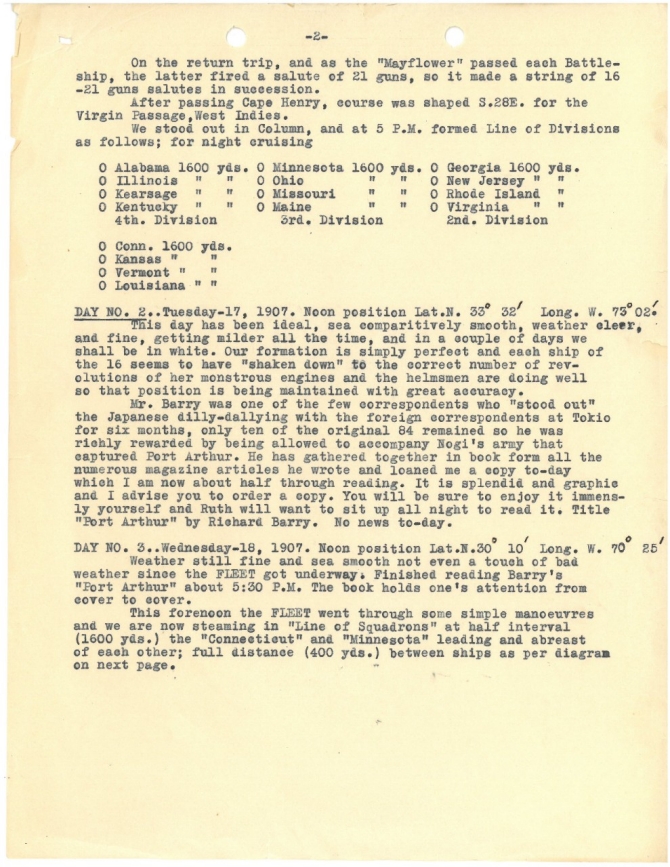 On the return trip, and as the “Mayflower” passed each Battleship, the latter fired a salute of 21 guns, so it made a string of 16–21 guns salutes in succession.

We stood out in Column, and at 5 P.M. formed Line of Divisions as follows; for night cruising

This day has been ideal, sea comparatively smooth, weather clear, and fine, getting milder all the time, and in a couple of days we shall be in white. Our formation is simply perfect and each ship of the 16 seems to have “shaken down” to the correct number of revolutions of her monstrous engines and the helmsmen are doing well so that position is being maintained with great accuracy.

Mr. Barry was one of the few correspondents who “stood out” the Japanese dilly-dallying with the foreign correspondents at Tokio [sic] for six months, only ten of the original 84 remained so he was richly rewarded by being allowed to accompany Nogi’s army that captured Port Arthur. He has gathered together in book form all the numerous magazine articles he wrote and loaned me a copy to-day which I am now about half through reading. It is splendid and graphic and I advise you to order a copy. You will be sure to enjoy it immensely yourself and Ruth will want to sit up all night to read it. Title “Port Arthur” by Richard Barry. No news to-day.

Weather still fine and sea smooth not even a touch of bad weather since the FLEET got underway. Finished reading Barry’s “Port Arthur” about 5:30 P.M. The book holds one’s attention from cover to cover.

This forenoon the FLEET went through some simple manoeuvres and we are now steaming in “Line of Squadrons” at half interval (1600 yds.) the “Connecticut” and “Minnesota” leading and abreast of each other; full distance (400 yds.) between ships as per diagram on next page.