We thank Rear Admiral Joseph R. Redman for his generous donation of this collection.

Scope and Content: This collection, donated by Rear Admiral Joseph R. Redman, consists of letters written by significant persons relating to Navy building projects from 1814–1854 and two sets of plans for the building of a saw mill and an engine at the Brooklyn Navy Yard. The collection also includes a set of original signatures from 1828–1890. Specific contents of the collection are listed below:

1.       Letter of 28 June 1814 from Isaac Hull to Secretary of the Navy William Jones on the building and cost of a ship house at the Portsmouth Navy Yard.

2.       Letter of 11 March 1826 from John Haviland (architect) on a general description of a design and cost of a building a naval hospital.

3.       Letter of 28 May 1830 from two naval architects to Commodore Isaac Chauncey (Commandant, New York Navy Yard) on a plan and estimate for building a timber shed.

4.       Letter of 29 May 1830 from Commodore Isaac Chauncey (Commandant, New York Navy Yard) to the Board of Navy Commissioners, Washington, on the plan and estimate for a timber shed at the New York Navy Yard.

5.       Letter of 27 June 1831 from Andrew Bartle to Board of Navy Commissioners, Washington, on the building of a wharf at the Pensacola Navy Yard.

6.       Sketch of the location of a boat house, mast house, and proposed alteration of the mast house at the New York Navy Yard as recommended by the Commissioners of the Navy and Commodore Isaac Chauncey (Commandant, New York Navy Yard) and approved by President Andrew Jackson on 9 November 1932.

7.       Letter of 10 May 1844 from Secretary of War William Wilkinson and Secretary of the Navy J. Mason with approval by President John Tyler that a portion of a tract of land, including the Pensacola Navy Yard (shown on map on reverse side) be transferred from the Navy Department to the War Department, for erecting thereon fortifications and other military works and purposes.

9.       Twenty-six autographs on pieces of paper from 1828 to 1890 including President John Quincy Adams, the Secretary of War, the Secretary of the Navy, and Commandants of a Navy Yard and Naval Construction Engineers. 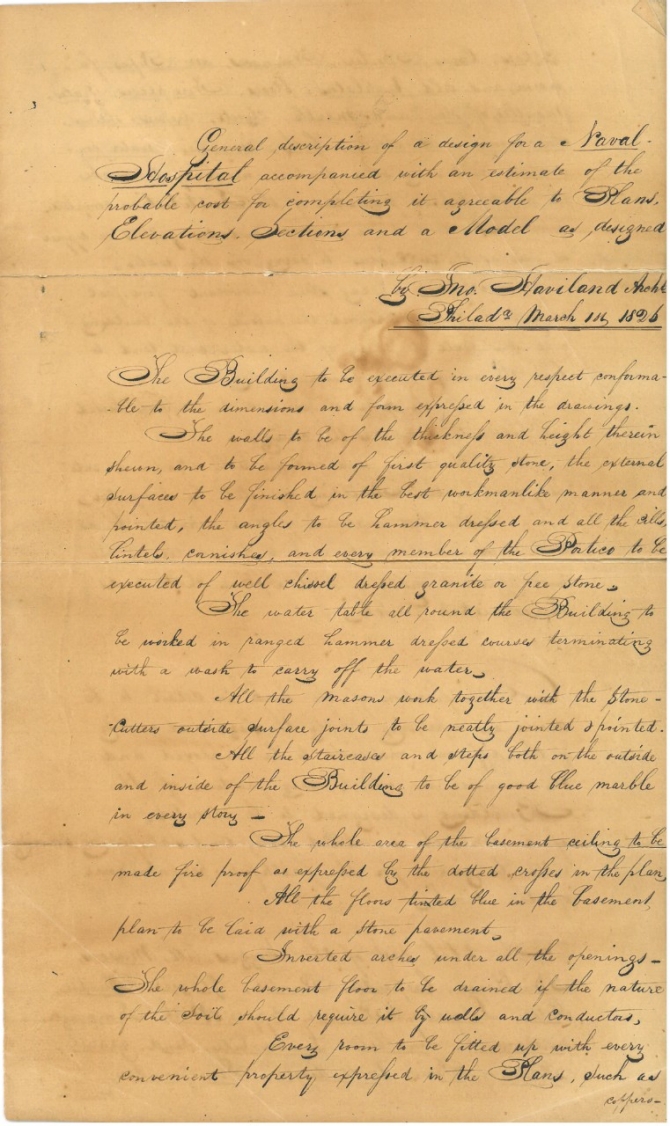 Transcription of Letter of 11 March 1826 from John Haviland (architect) on a general description of a design and cost of a building a naval hospital, page 1:

General description of a design for a Naval Hospital accompanied with an estimate of the probable cost for completing it agreeable to Plans, Elevations Sections and a Model as designed by [illegible] Haviland [illegible] March 11, 1826.

The building to be executed in every respect conformable to the dimensions and form expressed in the drawings.

The walls to be of the thickness and height therein shown, and to be formed of first quality stone, the external surface to be finished in the best workmanlike manner and painted, the angles to be hammer dressed and all the sills, lintels, varnished, and every member of the Portico to be executed of well [illegible] dressed courses terminating with a wash to carry off the water.

All the masons work together with the Stone-Cutters outside surface joints to be neatly jointed and pointed.

The whole area of the basement ceiling to be made fire proof as expressed by the dotted crosses in the plan,

All the floors tinted blue in the basement, plan to be laid with a stone pavement,

Inverted arches under all the openings –

The whole basement floor to be drained if the nature of the soils should require it by wells and conductors,

Every room to be fitted up with every convenient property expressed in the Plans, such as coppers – 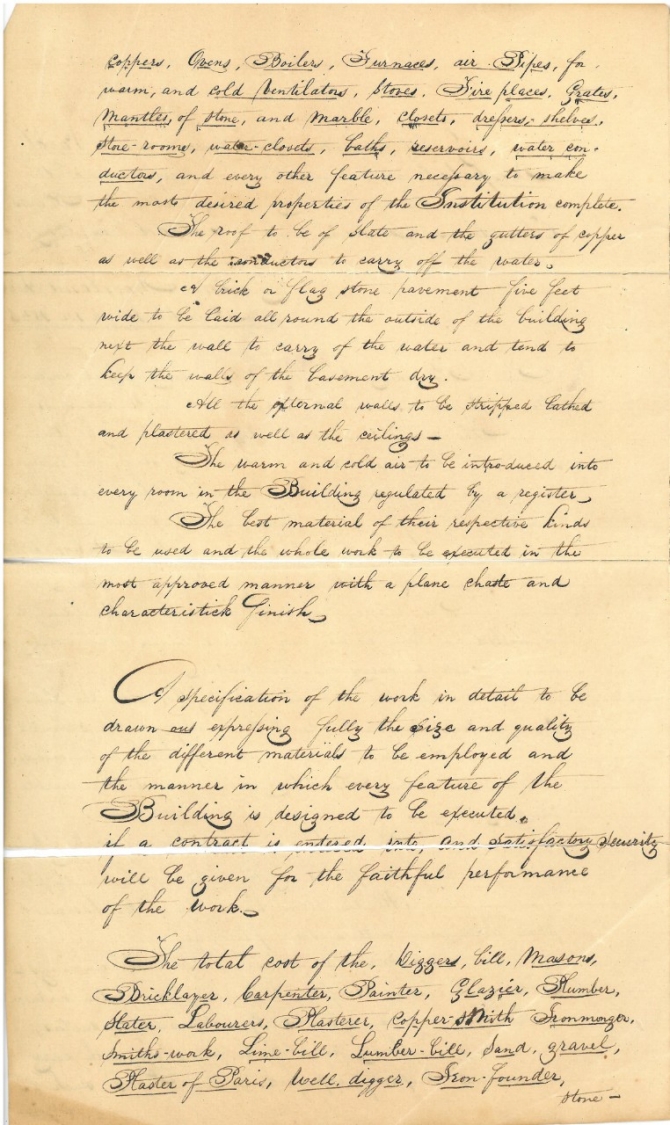 Transcription of Letter of 11 March 1826 from John Haviland (architect) on a general description of a design and cost of a building a naval hospital, page 2:

The warm and cold air to be introduced into every room in the Building regulated by a register.

The best material of their respective kinds to be used and the whole work to be executed in the most approved manner with a plane chaste [?] and characteristick finish.

A specification of the work in detail to be drawn out expressing fully the size and quality of the different materials to be employed and the manner in which every feature of the Building is designed to be executed if a contract is entered into, and satisfactory security will be given for the faithful performance of the work. 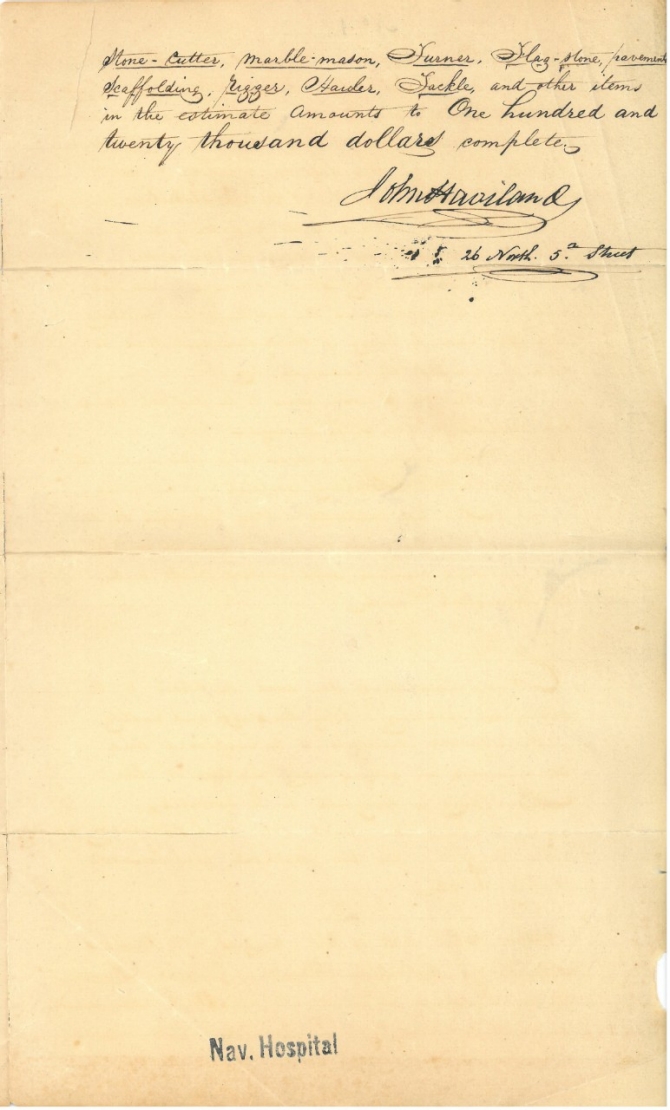 Transcription of Letter of 11 March 1826 from John Haviland (architect) on a general description of a design and cost of a building a naval hospital, page 3: