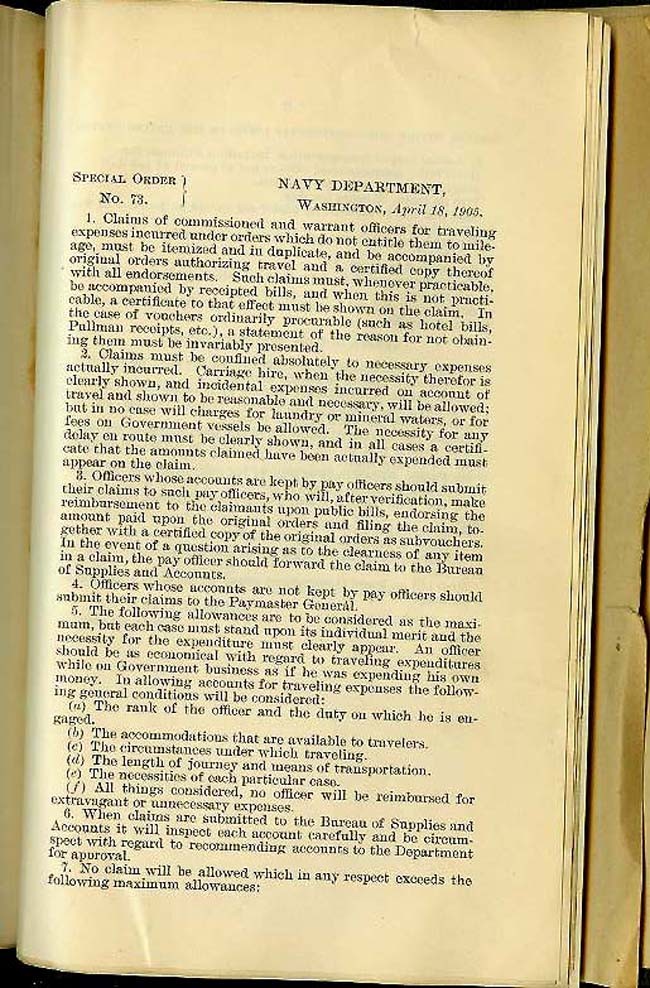 Special Order No. 73.
Navy Department
Washington, April 18, 1905.
1. Claims of commissioned and warrant officers for traveling
expenses incurred under orders which do not entitle them to mile-
age, must be itemized and in duplicate and be accompanied by
original orders authorizing travel and a certified copy thereof
with all endorsements. Such claims must, whenever practicable,
be accompanied by receipted bills, and when this is not practi-
cable, a certificate to that effect must be shown on the claim. In
the case of vouchers ordinarily procurable (such as hotel bills,
Pullman receipts, etc.), a statement of the reason for not obtain-
ing them must be invariably presented.
2. Claims must be confined absolutely to necessary expenses
actually incurred. Carriage hire, when the necessity therefor is
clearly shown and incidental expenses incurred on account of
travel and shown to be reasonable and necessary, will be allowed;
but in no case will charges for laundry or mineral waters, or for
fees on Government vessels be allowed. The necessity for any
delay en route must be clearly shown, and in all cases a certifi-
cate that the amounts claimed have been actually expended must
appear on the claim.
3. Officers whose accounts are kept by pay officers should submit
their claims to such pay officers, who will, after verification, make
reimbursement to the claimants upon public bills, endorsing the
amount paid upon the original orders and filing the claim to-
gether with a certified copy of the original orders as subvouchers.
In the event of a question arising as to the clearness of any item
in a claim, the pay officer should forward the claim to the Bureau
of Supplies and Accounts.
4. Officers whose accounts are not kept by pay officers should
submit their claims to the Paymaster General.
5. The following allowances are to be considered as the maxi-
mum, but each case must stand upon its individual merit and the
necessity for the expenditure must clearly appear. An officer
should be as economical with regard to traveling expenditures
while on Government business as if he was expending his own
money. In allowing accounts for traveling expenses the follow-
ing general conditions will be considered:
(a) The rank of the officer and the duty on which he is en-
gaged.
(b) The accommodations that are available to travelers.
(c) The circumstances under which traveling.
(d) The length of journey and means of transportation.
(e) The necessities of each particular case.
(f) All things considered, no officer will be reimbursed for
extravagant or unnecessary expenses.
6. When claims are submitted to the Bureau of Supplies and
Accounts it will inspect each account carefully and be circum-
spect with regard to recommending accounts to the Department
for approval.
7. No claim will be allowed which in any respect exceeds the
following maximum allowances: 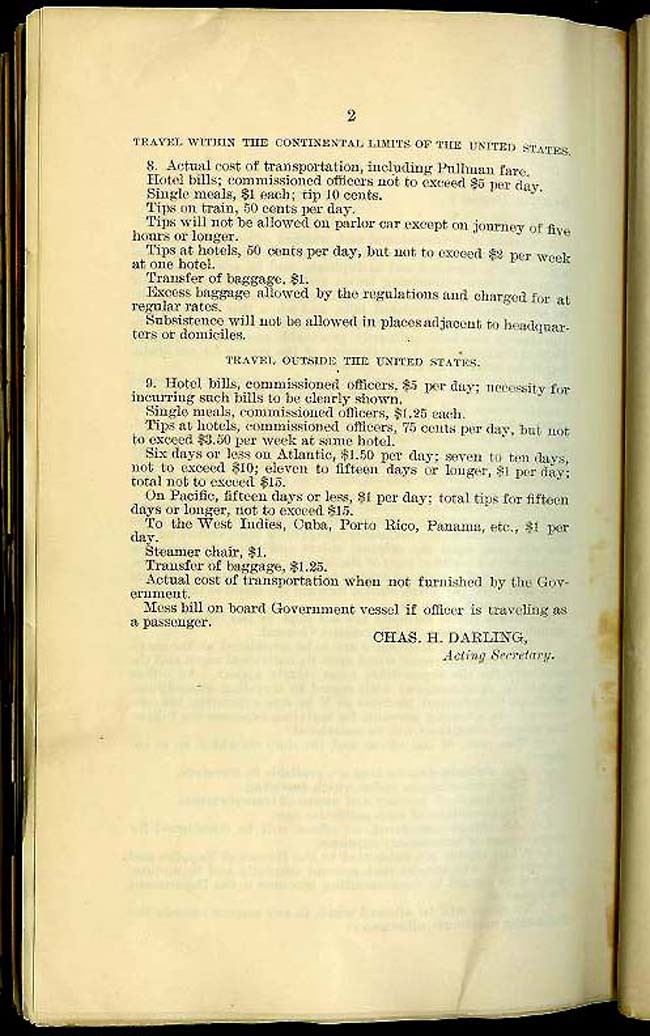 [page 2]
TRAVEL WITHIN THE CONTINENTAL LIMITS OF THE UNITED STATES
8. Actual cost of transportation, including Pullman fare,
Hotel bills; commissioned officers not to exceed $5 per day.
Single meals, $1 each; tip 10 cents.
Tips on train, 50 cents per day.
Tips will not be allowed on parlor car except on journey of five
hours or longer.
Tips at hotels, 50 cents per day, but not to exceed $2 per week
at one hotel.
Transfer of baggage, $1.
Excess baggage allowed by the regulations and charged for at
regular rates.
Subsistence will not be allowed in places adjacent to headquar-
ters or domiciles.
TRAVEL OUTSIDE THE UNITED STATES
9. Hotel bills, commissioned officers, $5 per day; necessity for
incurring such bills to be clearly shown.
Single meals, commissioned officers, $1.25 each.
Tips at hotels, commissioned officers, 75 cents per day, but not
to exceed $3.50 per week at same hotel.
Six days or less on Atlantic, $1.50 per day; seven to ten days,
not to exceed $10; eleven to fifteen days or longer, $1 per day;
total not to exceed $15.
On Pacific, fifteen days or less, $1 per day; total tips for fifteen
days or longer, not to exceed $15.
To the West Indies, Cuba, Porto Rico, Panama, etc., $1 per
day.
Steamer chair, $1.
Transfer of baggage, $1.25.
Actual cost of transportation when not furnished by the Gov-
ernment.
Mess bill on board Government vessel if officer is traveling as
a passenger.
CHAS. H. DARLING,
Acting Secretary.