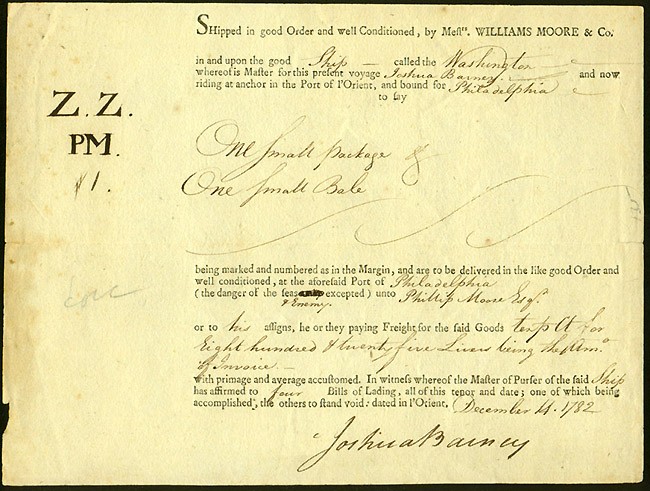 Shipped in good Order and well Conditioned, By Messers. Williams Moore & Co.
in and upon the good Ship called the Washington
whereof is Master for this present voyage Joshua Barney and now
riding at anchor in the Port of l'Orient, and bound for Philadelphia
to say

One small package &
One small Bale

being marked and numbered as in the Margin, and are to be delivered in the like good Order and
well conditioned, at the aforesaid Port of Philadelphia
(the danger of the seas & Enemy excepted) unto Phillip Moore Esq.

or to his assigns, he or they paying Freight for the said Goods tendered for
eight hundred & twenty five Lirers being the Am[ount]
of invoice.
with primage and average accustomed. In witness whereof the Master of Purser of the said Ship
has affirmed to four Bills of Lading, all of this tenor and date; one of which being
accomplished; the others to stand void: dated in l'Orient, December 14, 1872
Joshua Barney
[On left hand side are stamped: Z.Z. PM.]