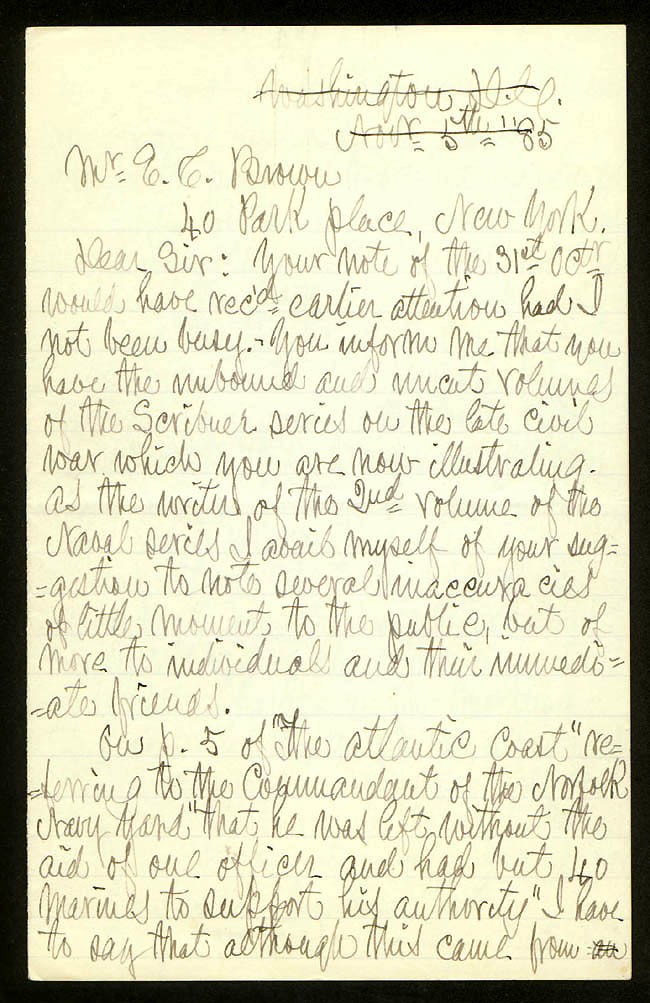 Mr. E. C. Brown
40 Park Place, New York
Dear Sir: Your note of the 31st Oct
would have rec'd earlier attention had I
not been busy. You inform me that you
have the unbound and uncut volumes
of the Scribner series on the late Civil
War which you are now illustrating.
As the writer of the 2nd volume of this
Naval series I avail myself of your sug-
gestion to note several inaccuracies
of little moment to the public, but of
more to individuals and their immedi-
ate friends.
On p.5 of the "Atlantic Coast" re-
ferral to the Commandant of the Norfolk
Navy Yard "that he was left without the
aid of one officer and had but 40
marines to support his authority" I have
to say that although this came from 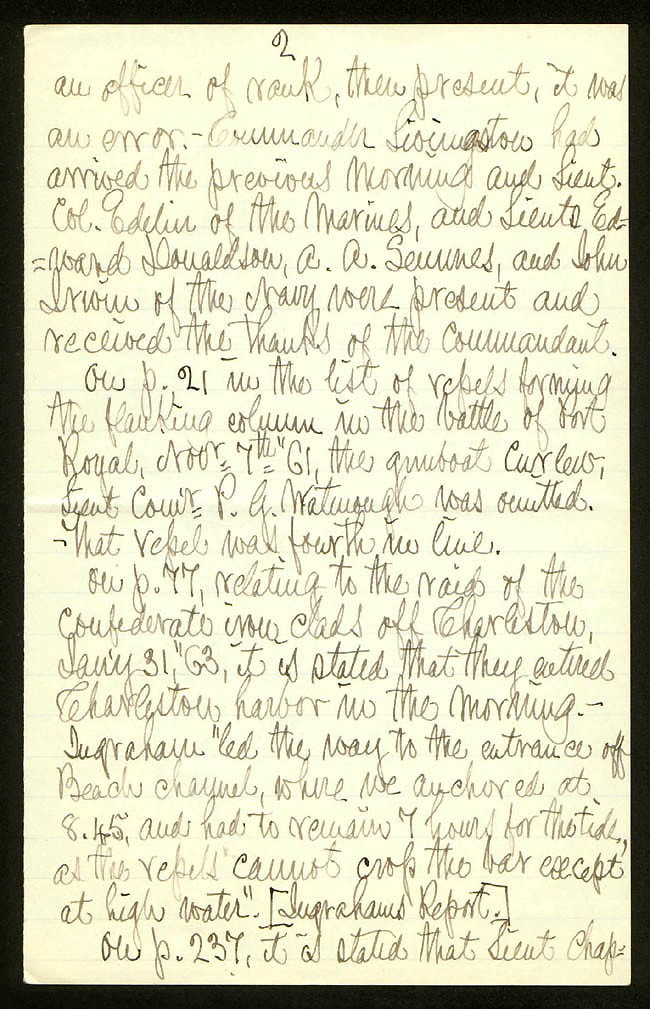 [page 2]
an officer of rank, then present, it was
an error. Commander Livingston had
arrived the previous morning and Lieut.
Col. Edelin of the Marines, and Lieuts Ed-
ward Donaldson, A.A. Semmes, and John
Irwin of the Navy were present and
received the thanks of the commandant.
On p.21 in the list of repels forming
the flanking column in the battle of Port
Royal, Nov 7th 61, the gunboat Curlew,
Lieut. Commander P.G. Watmough was omitted.
That repel was fourth in line.
On p. 77, relating to the raid of the
Confederate iron clads off Charleston,
Jan'y 31, '63, it is stated that they entered
Charleston harbor in the morning.
Ingraham "led the way to the entrance off
Beach channel, where we anchored at
8.45 and had to remain 7 hours for the tide,
as the repels cannot cross the bar except
at high water." [Ingraham's Report.]
On p. 237, it is stated that Lieut. Chap- 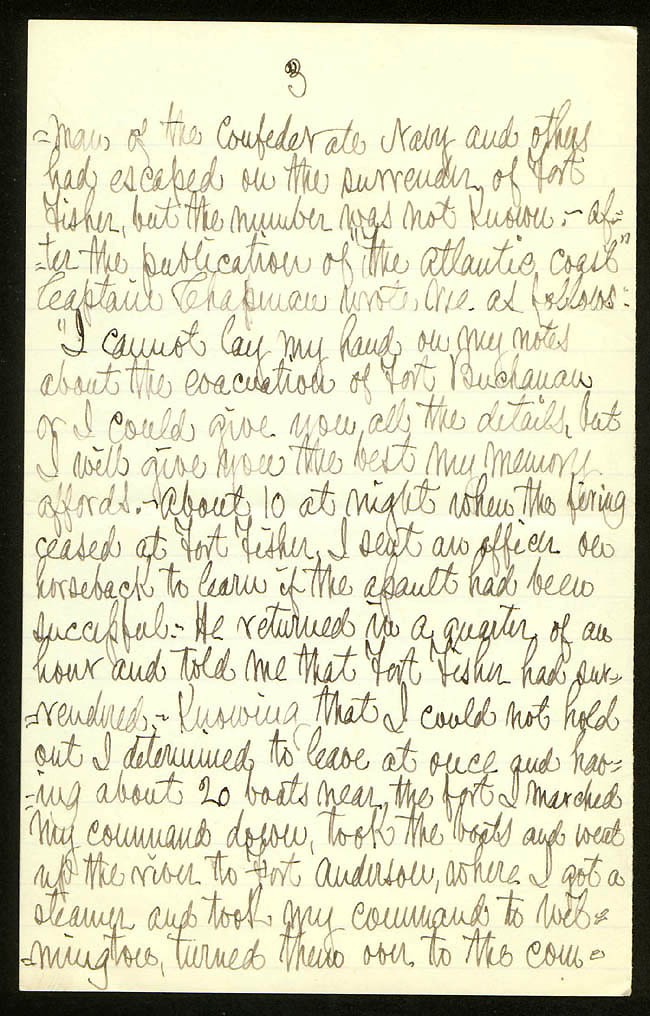 [page 3]
man of the Confederate Navy and others
had escaped on the surrender of Fort
Fisher, but the number was not known. Af-
ter the publication of "The Atlantic Coast"
Captain Chapman wrote me as follows:
"I cannot lay my hands on my notes
about the evacuation of Fort Buchanan
or I could give you all the details, but
I will give you the best my memory
affords. About 10 at night when the firing
ceased at Fort Fisher, I sent an officer on
horseback to learn if the assault had been
successful. He returned in a quarter of an
hour and told me that Fort Fisher had sur-
rendered. Knowing that I could not hold
out I determined to leave at once and hav-
ing about 20 boats near the fort I marched
my command down, took the boats and went
up the river to Fort Anderson, where I got a
steamer and took my command to Wil-
mington, turned them over to the com- 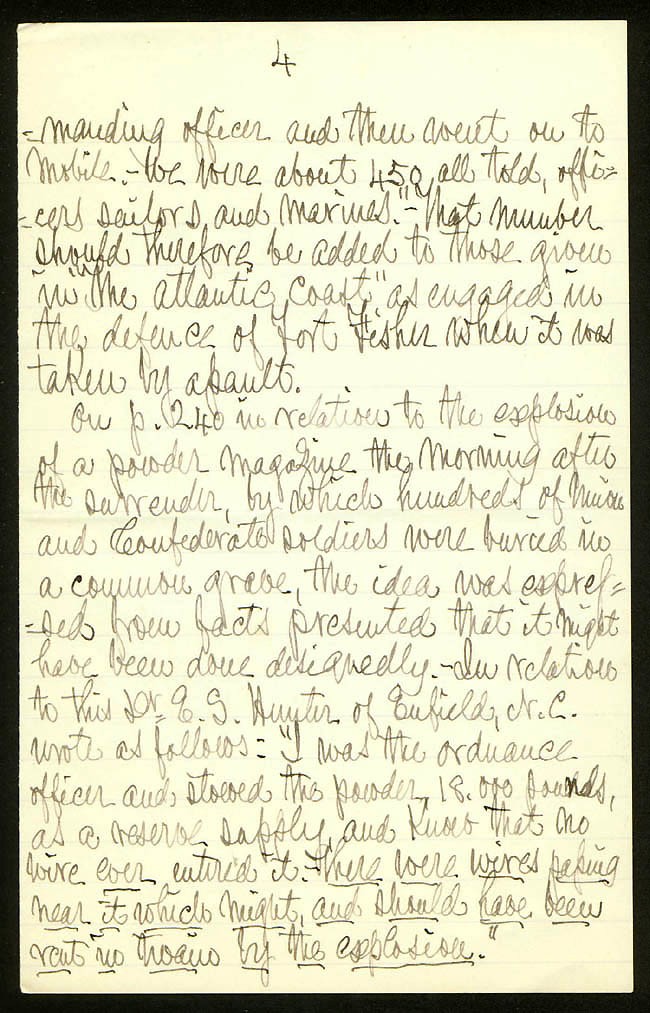 [page 4]
manding officer and then went on to
Mobile. We were about 450 all told, offi-
cers sailors and marines." That number
should therefore be added to those given
in "The Atlantic Coast" as engaged in
the defence of Fort Fisher where it was
taken by assault.
On p.240 in relation to the explosion
of a powder magazine the morning after
the surrender, by which hundreds of Union
and Confederate soldiers were buried in
a common grave, the idea was expres-
sed from facts presented that it might
have been done discreetly. In relation
to this Dr. E.S. Hunter of Enfield, N.C.
wrote as follows: "I was the ordnance
officer and stored the powder, 18,000 pounds,
as a reserve supply and know that no
wire ever entered it. There were wires passing
near it which might and should have been
rent in twain by the explosion. 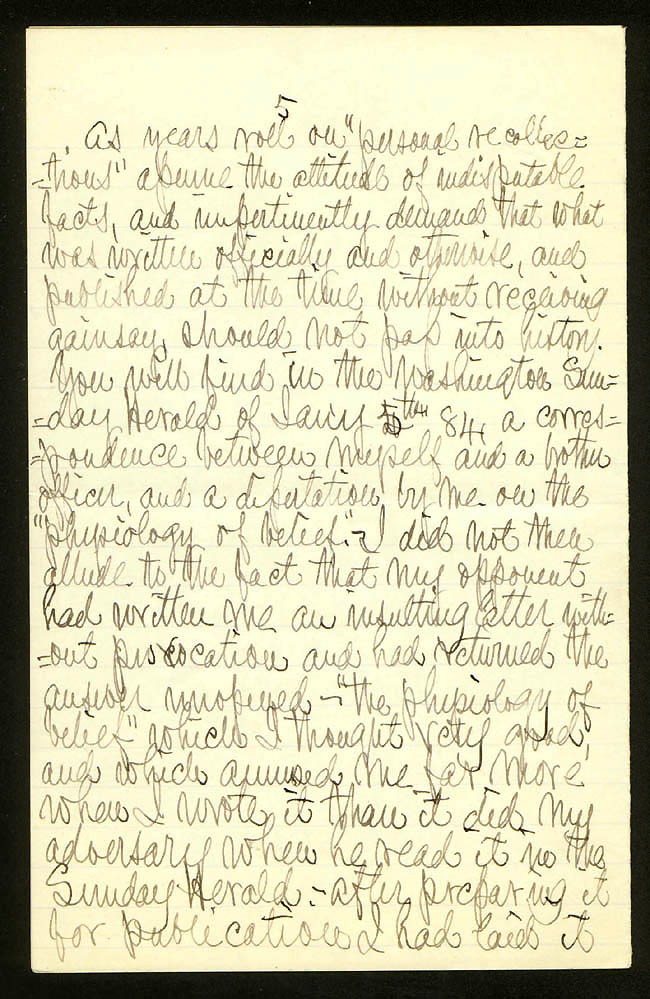 [page 5]
As years roll on "personal recollec-
tions" apend the attitude of indisputable
facts and impertinently demands that what
was written officially and otherwise, and
published at the time without receiving
gainsay, should not pop into history.
You will find in the Washington Sun-
day Herald of Jan'y 5th 84, a corres-
pondence between myself and a brother
officer and a disputation by me on the
"physiology of belief". I did not then
allude to the fact that my opponent
had written me an insulting letter with-
out provocation and had returned the
answer unopened - "the physiology of
belief" which I thought very good,
and which amused me far more
where I wrote it than it did my
adversary where he read it in the
Sunday Herald. After preparing it
for publication I had laid it 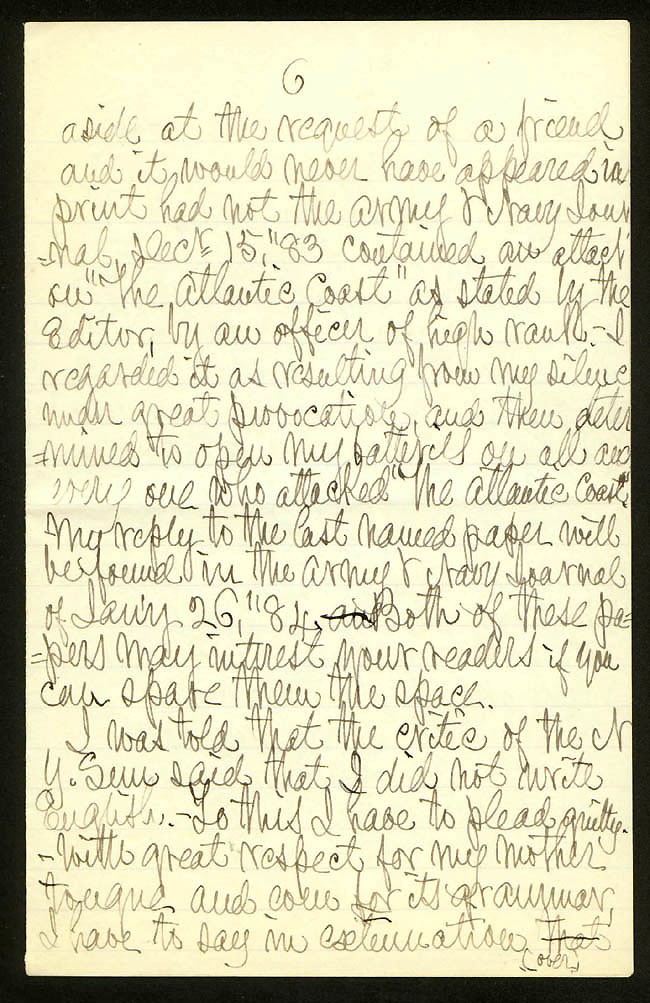 [page 6]
aside at the request of a friend
and it would never have appeared in
print had not the Army & Navy Jour-
nal Decr 15 '83 contained an attack
on "The Atlantic Coast" as stated by the
Editor, by an officer of high rank. I
regarded it as resulting from my silence
under great provocation and then deter-
mined to open my batteries on all and
every one who attacked "The Atlantic Coast".
My reply to the last named paper will
be found in the Army & Navy Journal
of Jan'y 26 '84. Both of these pa-
pers may interest your readers if you
can spare them the space.
I was told that the critic of the N.
Y. Sun said that I did not write
English. To this I have to plead guilty.
With great respect for my mother
tongue and love for its grammar,
I have to say in extenuation that
over 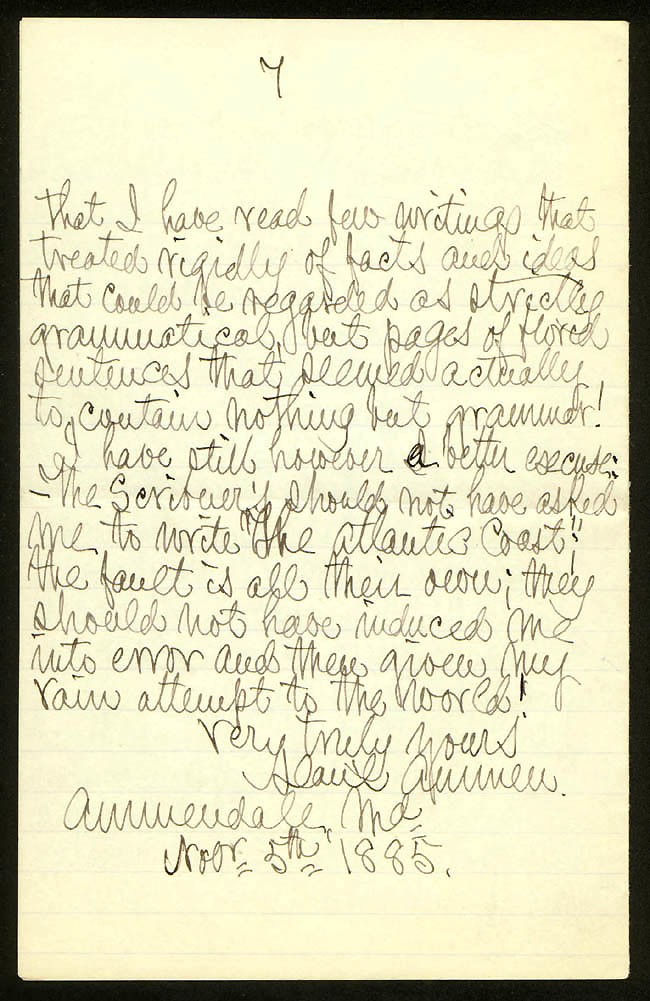 [page 7]
that I have read few writings that
treated rigidly of facts and ideas
that could be regarded as strictly
grammatical, but pages of forced
sentences that served actually
to contain nothing but grammar!
I have still however a better excuse:
The Scribner's should not have asked
me to write "The Atlantic Coast".
The fault is all their own; they
should not have induced me
into error and then given my
vain attempt to the world!
Very truly yours,
Daniel Ammen
Annendale Md
Nov 5th 1885