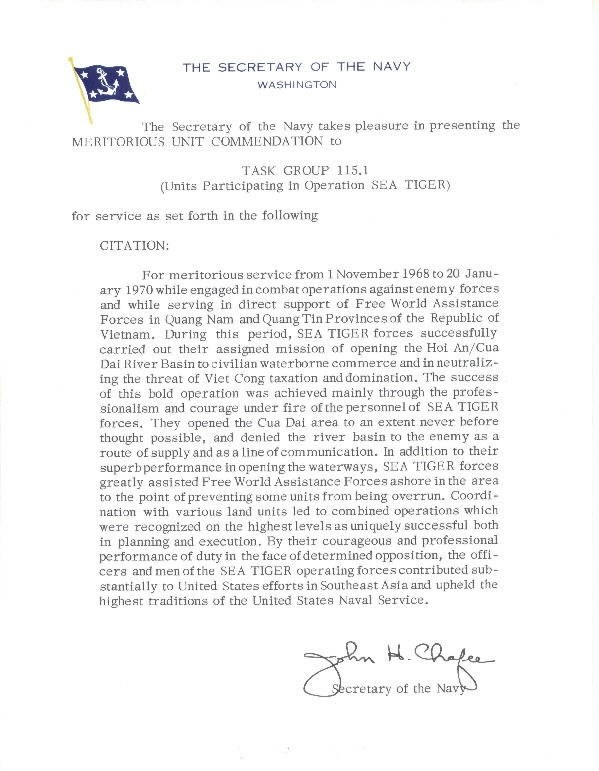 For meritorious service from 1 November 1968 to 20 January 1970 while engaged in combat operations against enemy forces and while serving in direct support of Free World Assistance Forces in Quang Nam and Quang Tin Provinces of the Republic of Vietnam. During this peiod, SEA TIGER forces successfully carried out their assigned mission of opening the Hoi An/Cua Dai River Basin to civilian waterborne commerce and in neutralizing the threat of Viet Cong taxation and domination. The success of this bold operation was achieved mainly through the professionalism and courage under fire of the personnel of SEA TIGER forces. They opened the Cua Dai area to an extent never before thought possible, and denied the river basin to the enemy as a route of supply and as a line of communication. In addition to their superb performance in opening the waterways, SEA TIGER forces greatly assisted Free World Assistance Forces ashore in the area to the point of preventing some units from being overrun. Coordination with various land units led to combined operations which were recognized on the highest levels as uniquely successful both in planning and execution. By their courageous and professional performance of duty in the face of determined opposition, the officers and men of the SEA TIGER operating forces contributed substantially to United States efforts in Southeast Asia and upheld the highest traditions of the United States Naval Service.