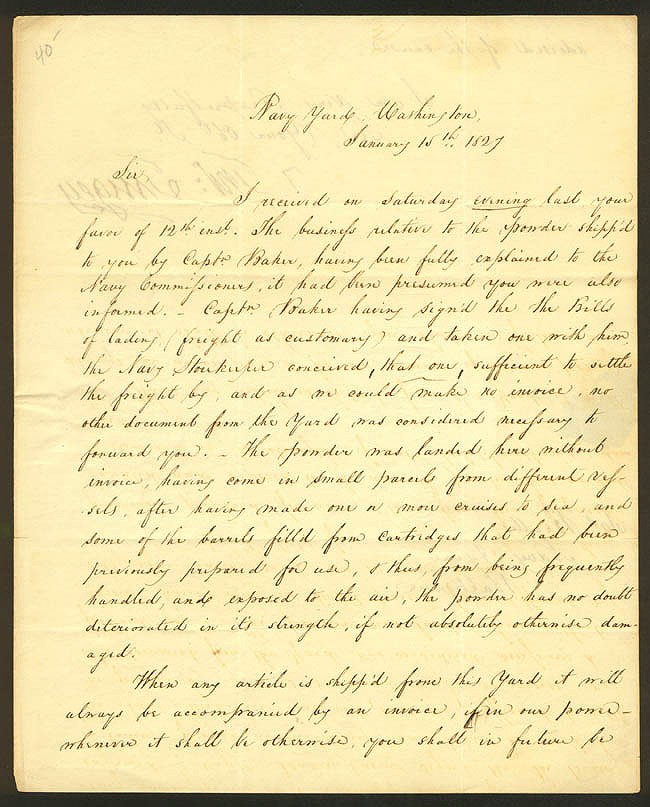 Navy Yard, Washington,
January 15th, 1827
Sir,
I received on Saturday evening last, your
favor of 12th inst. The business relative to the powder shipped
to you by Capt[ai]n Baker, having been fully explained to the
Navy Commissioners, it had been presumed you were also
informed - Capt[ai]n Baker having signed the Bills
of lading of freight as customary, and taken one with him
the Navy Storekeeper conceived, that one, sufficient to settle
the freight by, and as one could make no invoice, no
other document from the yard was considered necessary to
forward you. The powder was landed here without
invoice, having come in small parcels from different ves-
sels, after having made one or more cruises to sea, and
some of the barrels filled from cartridges that had been
previously prepared for use, [and] thus from being frequently
handled, and exposed to the air, the powder has no doubt
deteriorated in its strength, if not absolutely otherwise dam-
aged.
When any article is shipped from this yard it will
always be accompanied by an invoice, if in our power -
whenever it shall be otherwise, you shall in future be

[Page 2]
advised of the cause.
I am very respectfully
Sir, your ob[edien]t s[ervan]t
Tho[ma]s Tingey

[Page 3]
Thomas Tingey 15th January 1827
describing the quality of the
powder sent from the Navy
Yard in December 1826
[and] intended to be sold at
[]
James Beatty, Esq
Navy Agent
Baltimore